EFFECTS OF PITUITARY TUMORS ON THE VISUAL APPARATUS

EFFECTS OF PITUITARY TUMORS ON THE VISUAL APPARATUS

The optic chiasm lies above the diaphragma sellae. The most common sign that a pituitary tumor has extended beyond the conﬁnes of the sella turcica is a visual defect caused by the growth pressing on the optic chiasm. The most frequent disturbance is a bitemporal hemianopsia, which is produced by the tumor pressing on the crossing central ﬁbers of the chiasm and sparing the uncrossed lateral ﬁbers. The earliest changes are usually enlargement of the blind spot; loss of color vision, especially for red; and a wedge-shaped area of defective vision in the upper-temporal quadrants, which gradually enlarges to occupy the whole quadrant and subsequently extends to include the lower temporal quadrant as well. 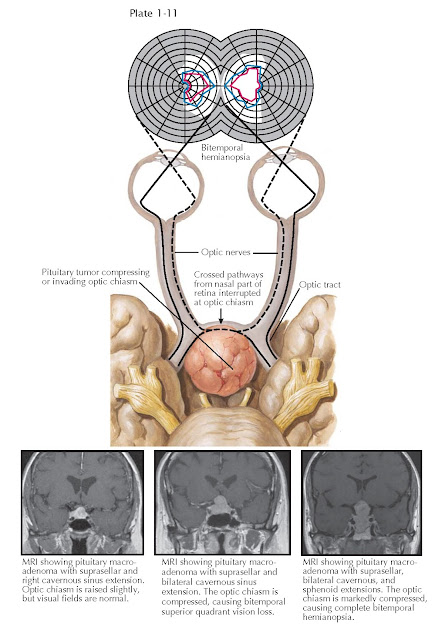 The type of visual defect produced depends on the position of the chiasm in relation to the pituitary gland and the direction of tumor growth. In about 10% of the cases, the chiasm may be found almost entirely anterior or posterior to the diaphragma sellae instead of in its usual position, which is directly above the diaphragma. There are also lateral displacements of the chiasm, which may cause either its right or its left branch to lie above the diaphragma. If the chiasm is abnormally ﬁxed, the adenoma may grow upward for a long time before it seriously disturbs vision. Bilateral central scotomas are caused by damage to the posterior part of the chiasm, and their occurrence suggests that the chiasm is preﬁxed and that the tumor is large. In other cases of preﬁxed chiasm, the tumor may extend in such a direction as to compress the optic tract rather than the chiasm, thus producing a homonymous hemianopsia. However, homonymous defects do not always indicate a preﬁxed chiasm; they may also be produced by lateral extension into the temporal lobe below a normally placed chiasm. Other visual defects that may occur include unilateral central scotoma; dimness of vision (amblyopia) in one eye caused by compression of one optic nerve; and an inferior quadrantal hemianopsia, presumably resulting from a large tumor causing the anterior cerebral arteries to cut into the dorsal surface of a normally placed chiasm.

Primary optic atrophy is present in most cases, but it may be absent when the lesion is behind the chiasm. Although papilledema is rare, it may occur with large tumors that cause increased intracranial pressure. If pressure on the visual pathway is relieved (e.g., with surgery or pharmacotherapy), the visual ﬁelds may return to normal. However, vision recovery is caused partly by the degree and duration of the optic tract deformation. Field defects can be detected on gross examination by observing the angle at which an object, such as the examiner’s ﬁnger, becomes visible when the patient looks straight ahead. Quantitative perimetry is necessary for exact plotting of the size and shape of the ﬁeld defect.

In some cases of pituitary tumor showing expansive growth sufﬁcient to enlarge the sella, the visual pathway escapes damage because the sellar diaphragm is tough and prevents expansion toward the chiasm. In these cases, the pituitary tumor may extend laterally into the cavernous sinus or inferiorly into the sphenoid sinus. This structure shows considerable variation, from a dense, closely knit membrane to a small rim with a wide infundibular opening. In most cases, the diaphragm does yield to pressure from below. Usually, the chiasm lies directly on the diaphragm and is separated from it by only a potential cleft. Frequently, particularly where there is a well-developed chiasmatic cistern, the optic chiasm may be as high as 1 cm above the diaphragm, which allows an invading tumor considerable room for expansion before it presses on the visual pathway.