Hypertension is a disorder of BP regulation that results from an increase in cardiac output, or most often, an increase in total peripheral vascular resistance. Cardiac output is usually normal in established essential hypertension, although increased cardiac output plays an etiologic role. The phenomenon of autoregulation explains that an increase in cardiac output causes persistently elevated peripheral vascular resistance, with a resulting return of cardiac output to normal. Fig. 15.1 shows mechanisms that can cause hypertension. Inappropriate activation of the renin-angiotensin system, decreased renal sodium excretion, and increased sympathetic nervous system activity, individually or in combination, are probably involved in the pathogenesis of all types of hypertension. Hypertension also has genetic and environmental causes; the latter includes excess sodium intake, obesity, and stress. The inability of the kidney to optimally excrete sodium, and thus regulate plasma volume, leads to a persistent increase in BP whatever the etiology.

Most patients with early hypertension have no symptoms attributable to high BP. However, long-term BP elevation often leads to hypertensive heart disease, atherosclerosis of the aorta and peripheral vessels, cerebrovascular disease, and chronic kidney disease.

Left ventricular hypertrophy (LVH) is the principal cardiac manifestation of hypertension. Increased left ventricular (LV) mass can be identified by echocardiography in nearly 30% of unselected hypertensive adults and in most patients with long-standing, severe hypertension. LVH is more prevalent in men and more common in black individuals than in white individuals with similar BP values. Increasing age, obesity, high dietary sodium intake, and diabetes are also associated with cardiac hypertrophy.

Increased ventricular afterload resulting from elevated peripheral vascular resistance and arterial stiffness is considered the principal determinant of myocardial hypertrophy in patients with hypertension. Hemodynamic overload stimulates increases in myocyte size and the synthesis of contractile elements. Fibroblast proliferation and deposition of extracellular collagen accompany these cellular changes and contribute to ventricular stiffness and myocardial ischemia. A growing body of evidence suggests that angiotensin II and aldosterone, independent of pressure overload, stimulate this interstitial fibrosis (Fig. 15.2).

Clinical consequences of hypertensive heart disease include heart failure and coronary heart disease (CHD). More than 90% of patients with heart failure have hypertension, and data from the Framingham Heart Study suggest that high BP accounts for almost one-half of the population burden of this disorder. Treating hypertension reduces the risk of heart failure by nearly 50%. Heart failure develops because of the myocyte hypertrophy and ventricular fibrosis that characterize hypertensive LVH. As illustrated in Fig. 15.3, the early functional manifestations of LVH include impaired LV relaxation and decreased LV compliance. Although the ejection fraction is preserved initially, diastolic dysfunction often results in increased filling pressures, leading to pulmonary congestion. This mechanism accounts for the symptoms observed in approximately 40% of hypertensive patients with heart failure. If excessive BP levels persist, myocyte loss and fibrosis contribute to ventricular remodeling and contractile dysfunction. Compensatory mechanisms, including remodeling of the peripheral vasculature and activation of the sympathetic nervous and renin-angiotensin systems, accelerate the deterioration in myocardial contractility. Ultimately, decompensated cardiomyopathy and heart failure from systolic dysfunction develop.

CHD is approximately twice as prevalent in hypertensive individuals as in normotensive individuals of the same age. CHD risk increases in a continuous and graded fashion with both systolic BP and diastolic BP. A reduction in diastolic BP of 5 mm Hg with drug therapy decreases the incidence of myocardial infarction (MI) by approximately 20%. Multiple factors contribute to the enhanced risk of CHD associated with high BP: atherosclerotic narrowing of epicardial coronary arteries is accelerated; coronary arteriolar hypertrophy, reduced myocardial vascularity (rarefaction), and perivascular fibrosis limit coronary arterial flow reserve and predispose the LV to ischemia; and impaired coronary endothelial function increases coronary tone. MI and chronic ischemia contribute to LV dysfunction, increasing the risk of heart failure and cardiovascular death. 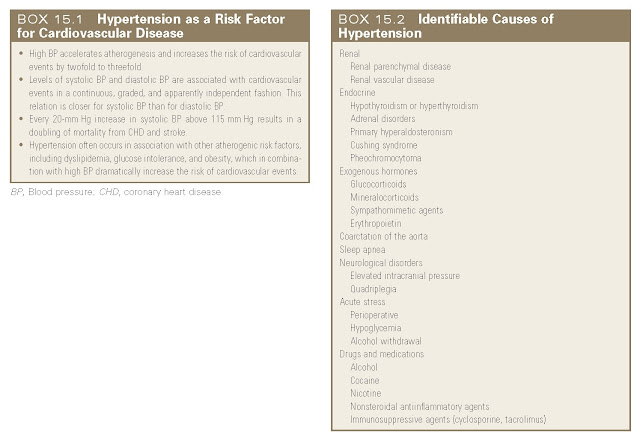 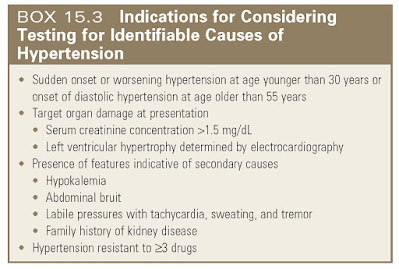 Objectives of the initial evaluation of a hypertensive patient include confirmation of hypertension, evaluation of the presence and extent of target organ disease, identification of cardiovascular risk factors and coexisting conditions that influence prognosis and therapy, as well as exclusion or detection of identifiable causes of elevated BP. These goals can usually be achieved with a comprehensive history, a thorough physical examination, and selected laboratory studies (Box 15.4).

Detection and diagnosis of hypertension begin with accurate office measurements of BP. Measurements should be acquired at each encounter, with follow-up determinations at intervals based on the initial level. Accurate equipment and proper technique, as described in Box 15.5, are critical. Measurement in the upper arm with an oscillometric device is preferred over auscultatory methods, and automated office BP measurement (AOBP) the use of an automated device that measures BP repeatedly in the absence of a healthcare professional is optimal. Before treatment with medication is initiated, high BP should be confirmed with measurements outside the office setting. Ambulatory BP monitoring (ABPM) (Box 15.6), a technique by which BP is measured over the course of a typical day using a small, portable machine worn by the patient, is the best method for diagnosing hypertension. Confirmation of high BP with home BP monitoring (HBPM) (Box 15.7), with measurements acquired systematically using a validated, automated device, is also acceptable. Both ABPM and HBPM are more reproducible, correlate more closely with target organ damage, and are more predictive of cardiovascular events than measurement of BP in the office. Approximately 20% of patients believed to have hypertension on the basis of office measurements have lower BP outside the office setting and do not require medical therapy. Conversely, some patients have “masked” hypertension, with high BP for most of the day despite normal office levels. 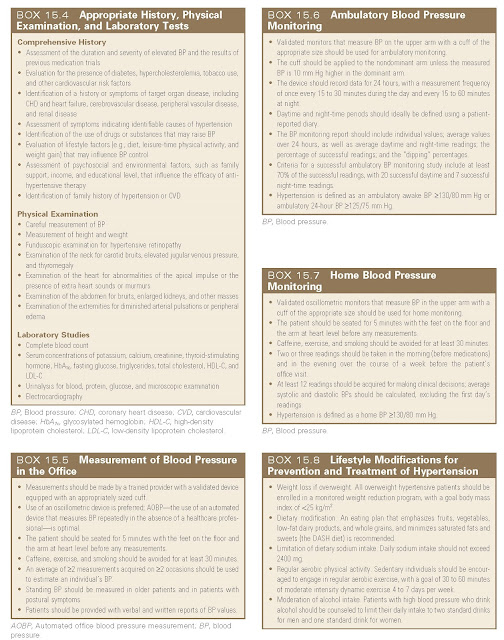 The principal goal of hypertension treatment is to reduce the risk of cardiovascular morbidity and death. The treatment approach is determined not only by the level of BP, but also the presence of other major cardiovascular risk factors and target organ damage. Lower risk patients with mild BP elevations may benefit from a period of observation and lifestyle modification, using medical therapy if the average BP exceeds 140/90 mm Hg over months of monitoring. The 2017 Hypertension Guideline recommends a medication treatment threshold of 130/80 mm Hg in patients with a high absolute risk of cardiovascular events that is, those with clinical cardiovascular disease (coronary heart disease, heart failure, or stroke), diabetes, chronic kidney disease (stage 3 or higher or stage 1 or 2 with albuminuria [≥300 mg/d, or ≥300 mg/g albumin-to-creatinine ratio]), or a calculated 10-year atherosclerotic vascular disease risk exceeding 10%. A treatment threshold of 140/90 mm Hg is reasonable in individuals with confirmed hypertension but lower cardiovascular risk. A target BP <130/80 mm Hg is recommended in most patients. However, in selected patients at high risk, a goal systolic BP of <120 mm Hg may be appropriate.

Lifestyle modifications are an important component of therapy for high BP. All patients with hypertension, high-normal BP, or a strong family history of hypertension should be encouraged to adopt the measures outlined in Box 15.8. These lifestyle changes are proven to lower

BP and may reduce the need for drug therapy, enhance the effectiveness of antihypertensive drugs, and favorably influence other cardiovascular risk factors. Other measures, including smoking cessation and reduced intake of saturated fats, may further reduce cardiovascular risk.

Pharmacological treatment of hypertension reduces the incidence of heart failure, stroke, and MI, and decreases the mortality rate due to cardiovascular causes in middle-aged and older adults. Drug therapy is indicated if lifestyle modifications do not bring BP into the desired range within a reasonable period of time. Thiazide diuretics, angiotensin-converting enzyme (ACE) inhibitors, angiotensin-receptor blockers (ARBs), and calcium antagonists are appropriate first-line agents. Thiazide diuretics and calcium antagonists are preferred in black patients who do not have a specific indication for an ACE inhibitor or ARB. In many patients, the choice of a drug is influenced by comorbid conditions. Table 15.1 lists agents that are preferred or relatively contraindicated in specific circumstances.

Many patients with hypertension have established cardiovascular disease, and their treatment regimen should include medications that control symptoms, slow disease progression, and prevent cardiovascular events. Treatment strategies for patients with ischemic heart disease or heart failure are addressed in Chapters 19 and 29.

The optimal target BP in patients with isolated systolic hypertension and chronic ischemic heart disease is controversial. In general, lower values of systolic BP are associated with better outcomes. However, myocardial perfusion occurs almost exclusively in diastole, and excessive lowering of diastolic BP in patients with obstructive coronary disease could theoretically result in ischemia and increase the risk of coronary events. Several studies have suggested a J-shaped relationship between diastolic BP and coronary risk, with an increase in events as diastolic BP is lowered to <80 mm Hg. These observations have led some experts to caution against aggressive BP lowering in patients with isolated systolic hypertension and ischemic heart disease.

In general, therapy with antihypertensive drugs should be initiated at low doses to minimize side effects. Long-acting formulations with 24-hour efficacy are preferred over shorter acting agents because of greater patient adherence to once-daily dosing regimens and more consistent BP control throughout the day. Based on patient response, the dose of the initial agent can be slowly titrated upward, or a small dose of a second agent can be added. Most patients with hypertension require multiple drugs for optimal BP control. Effective drug combinations use medications from different classes and result in additive BP-lowering effects, while minimizing dose-dependent adverse effects. Thiazide diuretics potentiate the effect of ACE inhibitors, ARBs, and calcium antagonists; other useful combinations include calcium antagonists and ACE inhibitors or ARBs. A combination of an ACE inhibitor or ARB plus a thiazide diuretic and calcium antagonist is often effective in patients who require three drugs. Recommended combinations of antihypertensive medications are illustrated in Fig. 15.4.

Resistant hypertension is defined as a properly measured BP that remains above goal despite the adherence of patients to a regimen of three optimally dosed antihypertensive agents of different classes, one of which is a diuretic. The true prevalence of resistant hypertension is not known, but it is probably present in approximately 15% of treated patients with hypertension. These patients are more likely to have target organ damage and are at greater risk of stroke, MI, heart failure, and chronic kidney disease compared with patients who have more easily controlled hypertension. Referral to a hypertension specialist should be considered for in-depth evaluation and treatment. Aldosterone antagonists are the most effective agents for lowering BP in patients with resistant hypertension who are already on a three drug regimen. Several device-based interventions, including renal denervation, carotid baroreceptor activation, and an arteriovenous coupler device are under investigation, but none of these technologies are currently approved for use in the United States.

Lowering BP is but one mechanism by which cardiovascular risk can be reduced in hypertensive patients. Irrespective of baseline cholesterol levels, statin therapy is recommended to reduce the incidence of MI and stroke in patients at intermediate or high risk of cardiovascular events. Low-dose aspirin also reduces cardiovascular event rates in selected patients.