Prostate cancer is the second leading cause of death from cancer in U.S. men. The deﬁnitive treatment of clinically localized prostate cancer with radical retropubic prostatectomy has been a popular treatment for 100 years. Although a technically formidable procedure, it remains the “gold standard,” as hormone treatment and chemotherapy are not curative and radiation therapy may not eradicate all cancer cells. The advantage of radical prostatectomy is that it offers cure with minimal collateral damage, provides more accurate pathologic staging, and treatment failure is easily identiﬁed. The ideal candidate for the procedure is healthy, less than 75 years old, has a life expectancy of at least 10 years, and has a biologically “signiﬁcant” tumor. 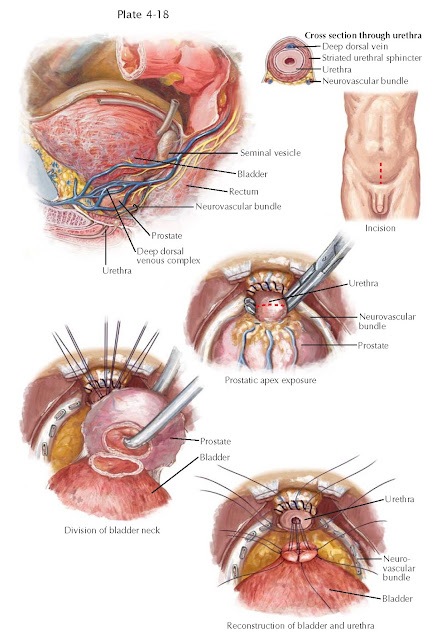 Radical retropubic prostatectomy involves the complete removal of the prostate gland and seminal vesicles and may include a pelvic lymph node dissection. The goals of surgery are cancer control and preservation of urinary control and sexual function. A spinal, epidural, or general anesthetic is generally used with the patient in the supine or relaxed dorsal lithotomy position. A midline, extraperitoneal lower abdominal incision from the pubis halfway to the umbilicus is made after a Foley catheter is placed in the bladder. The rectus muscles are separated in the midline, the transversalis fascia opened sharply, and the space of Retzius developed. Laterally, the peritoneum is mobilized off of the external iliac vessels (see Plate 2-6) to the bifurcation of the common iliac artery. A self-retaining Balfour retractor is then placed, and a narrow malleable blade provides excellent exposure for lymph node dissection. The lymph node dissection, if done, is ﬁrst undertaken on the side ipsilateral to the prostate tumor and proceeds by dividing the tissue over the external iliac vein. The lymphatic tissue is excised to the lateral pelvic wall, inferiorly to the femoral canal, and superiorly to the bifurcation of the common iliac artery. The obturator lymph nodes are also removed by skeletonizing the obturator vein and artery and sparing the obturator nerve. Frozen section is then per- formed on the excised nodes before prostatectomy.

Exposure for retropubic prostatectomy involves displacing the peritoneum superiorly and removing the ﬁbroadipose tissue covering the anterior prostate. These maneuvers expose the pelvic fascia, puboprostatic ligaments, and superﬁcial dorsal vein. The endopelvic fascia is then entered where it reﬂects over the pelvic side wall, allowing palpation of the lateral prostate. By ﬁnger dis- section, the levatorani muscles are released from the lateral prostate and, with sharp dissection, the puboprostatic ligaments are taken down anteriorly. The dorsal vein complex is then ligated with care to avoid damage to the striated urethral sphincter. These maneuvers help to optimally expose the prostatic apex for dissection.

The apical dissection is the most complex and critical step in the operation, as the striated urethral sphincter and the neurovascular bundles that control erections are nearby and the prostatic apex is the most common site for positive surgical margins. With gentle posterior displacement of the prostate, the prostatourethral junction is visualized. A right angle clamp is passed around the smooth muscle of the urethra anterior to the neurovascular bundles near the prostatic apex and the urethra is transected sharply. Six interrupted absorbable sutures are then placed in the distal urethra while the exposure is optimized and the Foley catheter is removed. The posterior aspect of the prostate is now exposed, allowing its dissection off the anterior rectal wall superiorly. Denonvilliers fascia is included with the prostate. In nerve-sparing procedures, the levator fascia is incised on the lateral prostate but the prostatic fascia must be left intact during the superior dissection, as the neurovascular bundle is located between the levator fascia and prostatic fascia.

For the remainder of the posterior dissection, the Foley catheter is replaced. After the prostate has been mobilized completely, the bladder neck is incised completely at the prostatovesicular junction. After the posterior bladder wall is divided, the bladder neck is retracted and the medially located vasa deferentia are ligated. The paired seminal vesicles are then dissected free, staying close to these organs to avoid damage to the pelvic plexus laterally. After the specimen is removed, the operative site is inspected for bleeding and residual tumor. The bladder opening is closed with absorbable suture in a “tennis racket” manner to a diameter that approximates the urethra, and a rosette of mucosa is created to line the bladder neck opening for a better anastomotic seal. Finally the bladder neck is sutured to the distal urethra using the preplaced sutures, a new Foley catheter is placed, and the incision closed. The patient is allowed to ambulate the day after the procedure and is discharged on hospital day 1 or 2. Excellent cancer control is achieved with this operation.