INITIAL FORMATION OF THE BRAIN AND SPINAL CORD: THE EMBRYO AT 20 TO 24 DAYS

INITIAL FORMATION OF THE BRAIN AND SPINAL CORD: THE EMBRYO AT 20 TO 24 DAYS 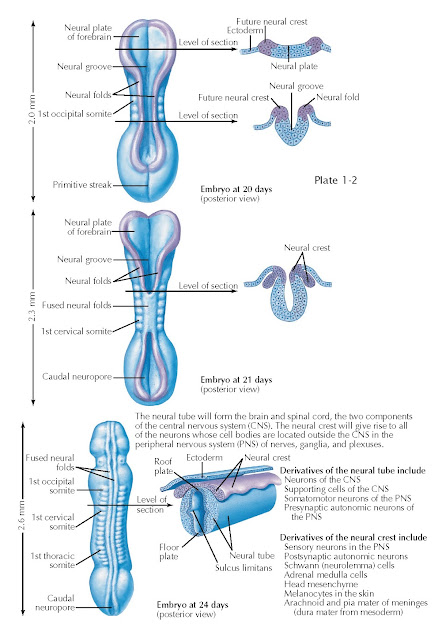 By embryonic day 21, the neural tube in the midsection of the embryo has closed; the neural folds fuse and the underlying neuroectoderm encloses a fluid-filled cavity that becomes the spinal cord central canal. The neural crest delaminates at the posterior midline. This epithelial (cell sheets) to mesenchymal (loosely arrayed, motile cells between the sheets) transition of neural crest cells is much like the epithelial to mesenchymal transition that occurs in many cancers of mature epithelial tissues. For the neural crest, however, this transition begins a highly regulated process of migration to multiple peripheral locations where neural crest precursors continue to divide and differentiate into sensory ganglia (cranial and posterior root), autonomic ganglia, enteric neurons, pigment cells, components of the posterior aorta, cranial bones, and connective tissues. The neural plate at the anterior and posterior ends of the embryo has begun to fold into a neural tube but has not yet reached the point where lateral margins meet and fuse at the posterior midline. The midline “hinge point” where neural tube formation begins is visible as the neural groove anteriorly and the rhomboid sinus posteriorly, and the forebrain neural plate as well as the posterior spinal cord remain open to the extraembryonic environment.

Within another 3 days, by embryonic day 24, the neural tube is closed from the anterior end (where the brain will form) throughout much of the length of the spinal cord, with the exception of an opening at the rhomboid sinus or posterior neuropore. At this stage, the neural tube has begun to acquire additional signs of differentiation that reflect the genesis of neurons with distinct functions. First, based upon the location of either the notochord, or the alar region and neural crest, two regions of the neural tube become specialized to provide signals to the rest of the neuroepithelial neural stem cells that constitute the developing nervous system. The neural tube cells above the notochord at the anterior midline constitute the floor plate, and those at the fusion of the neural folds at the posterior midline become the roof plate. Floor plate and roof plate cells secrete signals that influence neighboring cells in the neural tube, such as sonic hedgehog, a peptide hormone that regulates proliferation and differentiation. These signals further distinguish the presumptive spinal cord and hindbrain into anterior/basal and posterior/alar regions (see also Plate 1-6), separated by a midline groove referred to as the sulcus limitans (this structure is not always easy to see).

These geometrically defined domains of neural stem cells generate functionally distinct classes of neurons. The neural stem cells of the posterior/alar region will generate sensory projection and interneurons that relay and process incoming sensory information from peripheral sensory ganglia, and those in the anterior/basal region will give rise to motor neurons that project to peripheral muscles and autonomic ganglia, as well as interneurons that modulate the output of motor neurons. Signals from the roof plate and floor plate elicit local expression of transcription factors and other determinants in neighboring neural stem cells. These factors define the capacity of the local stem cells to generate distinct classes of sensory and motor projection or interneurons.