INITIAL SPECIFICATION OF THE NERVOUS SYSTEM: THE EMBRYO AT 18 DAYS

INITIAL SPECIFICATION OF THE NERVOUS SYSTEM: THE EMBRYO AT 18 DAYS

After fertilization and implantation, the embryo consists of a single cell layer called the inner cell mass. The inner cell mass sits at the bottom of a fluid-filled cavity defined by the key extraembryonic membrane, the amnion. Beneath the embryo is another cavity, the yolk sac, lined with a cell layer called the embryonic hypoblast, some of which will go on to form the allantois, an additional extraembryonic membrane. Cells from the inner cell mass that are immediately adjacent to the hypoblast constitute a second embryonic layer, called the epiblast, that will form most of the embryo. At this point in development, approximately 18 days after fertilization/ implantation, epiblast cells define the embryonic disc. Once formed, the embryonic disc goes through a series of cell movements referred to collectively as gastrulation. The key movement is the local proliferation, accumulation, and ingression of cells from the epiblast that form first the primitive knot (or Hensen’s node), then the primitive streak, which defines the midline axis of the embryo. The cells that have migrated “into” the embryo from the primitive knot, interposed between the epiblast and the hypoblast, coalesce to form a distinct cell layer called the mesoderm. Their position as the “middle” (meso) layer of the embryo defines the remaining epiblast cells on top of these mesodermal cells as ectoderm (ecto: outside) and the hypoblast cells that are underneath as endoderm (endo: inside). A subset of ectodermal cells will form the entire central and peripheral nervous system. This subset of cells is defined by their proximity to mesodermal cells that coalesce first to form the notochordal plate, and then further to form the notochord at the midline of the embryo. The notochord becomes a source of signaling molecules released by notochord cells that act on over- lying ectoderm. These signals both instruct the overlying ectodermal cells to become neural stem cells capable of giving rise to neurons and glia of the mature central and peripheral nervous systems and protect these early neural stem cells (collectively, the neuroectoderm) from additional signals in the embryo that transform ectodermal cells into skin and other derivatives. 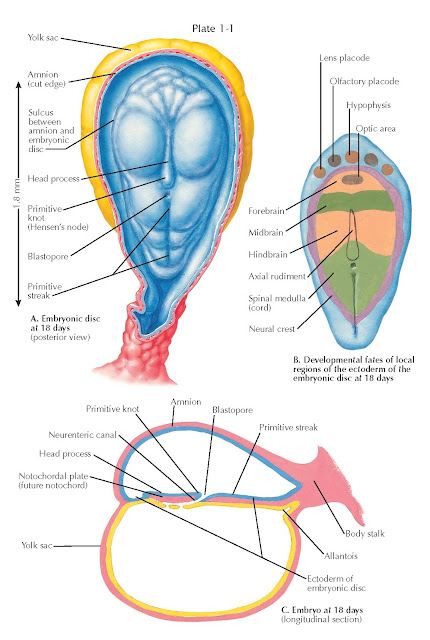 At this point, the fate of ectodermal cells, particularly that of the visibly thickened sheet of cells above the notochord called the neural plate, can be mapped fairly precisely. Stem cells found in local regions of the ectoderm and neuroectoderm from the front (nearer to the primitive knot/Hensen’s node) to the back will go on to form sensory specializations (lens and olfactory placode), endocrine tissue (the hypophysis), and, most notably, distinct regions of the central nervous system (CNS), including the forebrain (cerebral cortex, hippocampus, basal ganglia, basal forebrain regions such as the amygdala, olfactory bulb, and thalamus), midbrain (superior and inferior colliculi and tegmental areas), hindbrain (cerebellum and brainstem), and spinal cord. In addition, the neuroectodermal cells at the margin of the neural plate—farthest from the notochord and its instructive as well as protective signals—become a specialized population of neural stem cells called the neural crest. These neural crest cells eventually delaminate from the neuroectoderm and migrate throughout the embryo, where they make sensory ganglia as well as sympathetic and parasympathetic ganglia of the peripheral nervous system. In addition, neural crest cells con- tribute to the adrenal glands, and make pigment cells as well as well as cranial bones, teeth, and connective tissue. This geometric division of the neuroectoderm into a “fate map” for early populations of neural stem cells at distinct locations reflects a more fundamental molecular process. Because of variations in local signals exchanged between the notochord, the neuroectoderm, and some other early embryonic structures that arise during gastrulation, there are local changes in patterns of gene expression that distinguish the cells that will generate the forebrain, midbrain, hindbrain, and spinal cord. For the most part, these genes are transcription factors that then influence the subsequent expression of downstream genes that confer local identity in neuronal progeny. Thus the combination of cell movements and cell-cell signaling that occur during early embryogenesis establish a spatial and molecular template for the construction of the entire central and peripheral nervous system.