Linear immunoglobulin A (IgA) bullous dermatosis is an infrequently encountered autoimmune blistering disease that was originally described in 1979. This disease has a characteristic immunofluorescence staining pattern that is used to differentiate it from other blistering diseases such as dermatitis herpetiformis. As the name implies, linear IgA is deposited along the length of the dermal-epidermal junction. Chronic bullous disease of childhood is considered by most to be the same disease, although there are a few clinical differences in age at onset and associations that can be used to justify separating them into two distinct, albeit very similar, entities. Most cases of chronic bullous dermatosis of childhood are idiopathic, whereas most cases of linear IgA bullous dermatosis are drug induced and occur in an older population.

Clinical Findings: Linear IgA bullous dermatosis is rare and is estimated to occur in 1 of every 2,000,000 people. There is no race or sex predilection. It occurs most frequently in the adult population. The blistering disease has an insidious onset with small vesicles that may mimic dermatitis herpetiformis. The blisters are pruritic and do not have the same burning sensation as occurs in dermatitis herpetiformis, nor is there any relationship to dietary intake. The bullae in linear IgA bullous dermatosis are characteristically arranged in a “string of sausages” configuration. Each bulla is elongated and tapers to an end, with a small area of intervening normal-appearing skin before the tapering beginning of a new bulla. This string can be linear or annular in orientation. The blisters are tense and eventually rupture and heal with minimal scarring. Mucous membrane involvement is frequently seen and can resemble that of mucous membrane pemphigoid. 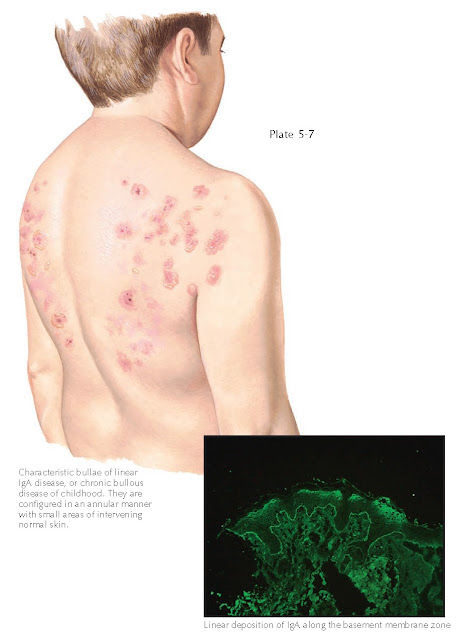 Histology: The immunofluorescence staining pattern is characteristic and shows linear IgA all along the basement membrane zone. This is highly specific and sensitive for the diagnosis of linear IgA bullous dermatosis and chronic bullous disease of childhood. Routine hematoxylin and eosin staining shows a subepidermal blister with an underlying neutrophilic infiltrate. This can be impossible to distinguish from dermatitis herpetiformis or bullous lupus, so immunostaining is required.

Pathogenesis: The exact target antigen in linear IgA bullous dermatosis is unknown. It is speculated that the IgA antibodies are directed against a small region of bullous pemphigoid antigen 180 (BP180). Other possible antigens exist and have been localized to the lamina lucida and lamina densa regions of the basement membrane. The reason for formation of these anti- bodies and how certain medications induce them are unknown. Once present, the antibodies target the basement membrane zone and cause inflammation by various mechanisms, ultimately leading to disruption of the dermal-epidermal junction and blistering.

Treatment: The first line of therapy is dapsone. Patients respond quickly to this medication. Low doses of dapsone are usually all that is needed. Alternative substitutes for dapsone include sulfapyridine and colchicine. Oral prednisone can be helpful initially, but because of the long-term side effects, patients should be transitioned to one of the other medications mentioned. Drug-induced variants of this blistering disease are best treated by recognizing the common culprits and removing them immediately. Over a period of a few weeks, most patients who have discontinued the offending medication return to a normal state. If the disease is found to be associated with an underlying malignancy or other autoimmune condition, therapy with dapsone is warranted. Treatment of the underlying condition should also be undertaken. If the malignancy or the associated disease is put into remission, there is a good possibility that the blistering disease will remit as well.