Mucous membrane pemphigoid goes by other names, including cicatricial pemphigoid, Brunsting-Perry pemphigoid, ocular pemphigoid, and benign mucous membrane pemphigoid. The last name should not be used because this is a chronic progressive, disabling disease with severe morbidity and mortality. The term cicatricial inherently states that the disease is associated with scarring, but this is not always the case. Hence, one patient without scarring may be referred to as having ocular pemphigoid and another with scarring may be said to have cicatricial ocular pemphigoid. Almost all patients will have some form of scarring, albeit very mild in some cases, if monitored for a long enough period. In reality, these are names given to a heterogeneous group of autoimmune blistering diseases that express a unique phenotype and have been shown to have small variances in the basement membrane zone autoantibodies they produce.

Clinical Findings: Mucous membrane pemphigoid can be seen in any racial group and affects females more often than males, in a 2 : 1 ratio. It is a disease of older persons and is most commonly seen in the seventh and eighth decades of life. Mucous membrane pemphigoid is a severe, chronic autoimmune blistering disease with grave consequences. It is a major cause of morbidity and mortality, and therapy can be difficult. Up to one quarter of these patients have eye involvement, which can lead to decreased vision and blindness. Mucous membrane disease is typically the initial sign: Patients present with painful erosions in the nasal passages, oropharynx, genitalia, and pulmonary tree. Patients complain of pain and difficulty eating secondary to severe discomfort. Erosions are the most common clinical findings, but vesicles and bullae may also be seen. Pulmonary and esophageal involvement may lead to strictures that result in difficulty with breathing or eating. Weight loss typically ensues, as does malaise and fatigue. 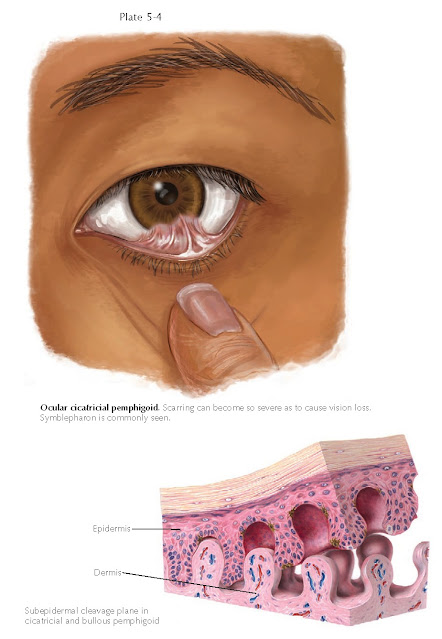 The skin can also be affected, leading to blister formation that heals with scarring and milia. If blisters develop on the scalp, they heal with a scarring alopecia. This form of the disease has been given the name Brunsting-Perry pemphigoid. This term is typically reserved for only those cases involving the scalp and skin that do not affect the mucous membranes.

Ocular pemphigoid is a chronic symmetric disease. The initial symptoms are inflamed conjunctiva, discomfort, pain, and increased tear production. Scarring soon develops and forms fibrous adhesions between the palpebral and bulbar conjunctivae. This scarring is termed symblepharon. The scaring is progressive, and it may cause the eyeball to become frozen in place. Entropion is common, and as it progresses, the eyelashes turn inward (trichiasis) and are forced against the cornea, which causes severe pain, irritation, and corneal ulceration. Patients cannot entirely close their eyelids because of the severe scarring. The damaged cornea undergoes keratinization, leading to opacity of the cornea and blindness.

Histology: Subepidermal blistering that heals with scar formation is the hallmark of this disease. The blistering takes place just below the keratinocyte, within in the lamina lucida. Immunohistochemical staining with collagen type IV shows that the blister plane is above the level of the lamina densa. The immunostaining and routine hematoxylin and eosin staining show a picture very similar to that of bullous pemphigoid. Linear immunoglobulin G and complement C3 immunofluorescent staining is present along the basement membrane zone.

Pathogenesis: Autoantibody formation against proteins of the basement membrane zone has been linked to cicatricial pemphigoid. Many different antibodies against these proteins exist, including antibodies against the laminins, bullous pemphigoid antigens 180 and 230, and many other proteins as yet unclassified. The heterogeneity in antibody production likely accounts for the varying clinical phenotypes that are expressed.

Treatment: Prednisone is the drug used to treat the disease initially. After the disease is under some control, the addition of a steroid-sparring immunosuppressant should be attempted. Commonly used medications include azathioprine, methotrexate, myco-phenolate mofetil, and cyclophosphamide. Dapsone and sulfapyridine, a similar medication that can be used in place of dapsone, have had some success treating this disease. Intravenous immunoglobulin (IVIG) has been used with success in refractory cases.