Clinical Findings: The hemidesmosomal plaque is the main anchoring system of the dermal-epidermal junction. It is a complex apparatus with a multitude of proteins that interact to bind the epidermis to the underlying dermis. If it is interrupted, the pemphigoid complex of diseases may occur. These conditions include bullous pemphigoid, herpes gestationis, and cicatricial pemphigoid. Of these, bullous pemphigoid is the disease state most frequently encountered. It most commonly occurs in the fifth to seventh decades of life, with no race or sex predilection. 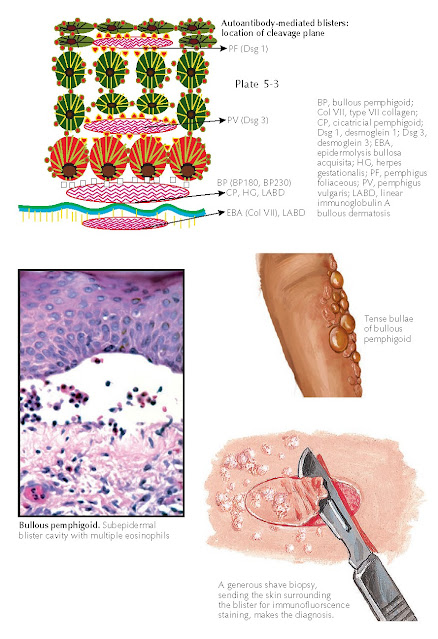 Clinically, patients often have a prodrome of intensely pruritic patches and plaques on the trunk, particularly the abdomen. Soon thereafter, they begin to develop large, tense bullae. The bullae can range from 1 cm to 10 cm in diameter, with an average of 2 cm. The blisters are tense to palpation and are not easily ruptured. If they do rupture, a fine, clear to slightly yellow serous fluid drains, and the underlying dermis is exposed. Reepithelialization is fairly rapid. Patients have continuous formation of new bullae, followed by healing and then repetition of the blistering pattern, until treatment is obtained. Scarring is minimal unless secondary infection has occurred. Most patients with pemphigoid do not have oral involvement, in direct contrast to those with the pemphigus class of diseases.

Bullous pemphigoid can spontaneously remit and relapse over time. Most patients seek therapy and are treated with a host of agents. Patients typically respond well to therapy and overall have an excellent prognosis. Secondary infections and side effects from therapy can lead to morbidity and mortality. Laboratory testing reveals immunoglobulin G (IgG) antibodies against BP180 or BP230 or both.

Pathogenesis: Bullous pemphigoid is caused by IgG autoantibody production. The two autoantibodies produced attack the BP180 and BP230 proteins, which are integral components of the hemidesmosomal plaque. BP180 is a transmembrane protein, and BP230 is an intracellular protein that lies within the keratinocyte and binds to BP180 and keratin filaments. The reason for the development of these antibodies is unknown. Once they have formed, they attach to the hemidesmosomal proteins. This activates a plethora of pathogenic mechanisms that act to induce separation of the epidermis from the dermis. Critical in the pathogenesis is activation of the complement cascade by the IgG anti-bodies. Complement activation may lead to further recruitment of inflammatory cells, which can be activated and thereafter release cytokines and enzymes that perpetuate the response.

Histology: Routine hematoxylin and eosin staining reveals a cell-poor subepidermal blister with scattered eosinophils. The histological differential diagnosis can be between bullous pemphigoid and epidermolysis bullosa acquisita (EBA). Immunofluorescence staining can be used to help differentiate the two. IgG and complement C3 localize to the basement membrane zone and appear as a linear band. The salt-split skin technique can also be used to differentiate the two diseases. This is achieved by incubating skin in a 1M NaCl solution to split the skin through the lamina lucida. When immunofluorescence staining is used on salt-split skin, the immunoreactants localize to the blister roof in bullous pemphigoid and to the dermal base in EBA.

Treatment: The severity of bullous pemphigoid varies. Therapy needs to be tailored to the individual. Many patients are older and have comorbidities that must be taken into account. Mild, localized disease can be treated with high-potency topical steroids. Severe disease is treated initially with oral steroids, and then the patient is transitioned to a steroid-sparing agent. The medications that have been routinely used include mycophenolate mofetil, azathioprine, and the combination of tetracycline and nicotinamide. Newer agents such as intravenous immunoglobulin (IVIG) have been used for severe refractory disease.