The basement membrane zone (BMZ) of the epidermis is a beautiful and complex structure and a marvel of biological engineering. The zone acts to attach the overlying epidermis to the underlying stromal tissue, in this case the papillary dermis, which is made predominantly of collagen bundles. A plethora of unique and specialized proteins play critical roles in the proper functioning of the BMZ. Any defect or abnormal antibody that can cause disruption of the normal architecture can result in fracturing of the BMZ and blister formation.

The BMZ can be appreciated on routine hematoxylin and eosin (H&E) staining as an eosinophilic band below the basilar keratinocytes. The components of the BMZ are produced in two locations: the epidermal keratinocyte and the dermal fibroblast. These cells act to produce the required proteins in the correct ratio to maintain a functional basement membrane. The basement membrane’s most important function is to keep the epidermis firmly attached to the underlying dermis. This is necessary for life. This specialized structure also acts to encourage migration of cells and repair of the epidermal-dermal barrier after trauma. Many other critical processes and physiological roles depend on the proper functioning of the BMZ, including permeability of water and other chemical substrates, proteins, and cellular elements. The BMZ is a highly organized structure that is consistent from person to person.

The structure of the BMZ can be subdivided into individual compartments for study, with the under standing that the entire unit functions as one. These are the epidermal basilar cell cytoskeleton, hemidesmosome, lamina lucida, lamina densa, and sublamina papillary dermis. Each of these components is made up of unique proteins that act in harmony to preserve the functional role of the BMZ. The basilar keratinocytes contain intracellular cytoskeleton components made of keratin intermediate filaments, predominantly keratin 5 and keratin 14. The keratin intermediate filaments are interwoven into the hemidesmosomal plaque to firmly adhere the basilar cell to the hemidesmosome.

The hemidesmosome is one of the main components of the BMZ. Its purpose is to attach the basilar layer keratinocytes to the underlying stroma that is, the papillary dermis. The hemidesmosome is made up of many unique and highly integrated groups of protein- to-protein connections. The main proteins in the hemidesmosomal plaque are the bullous pemphigoid antigens BP180 and BP230, integrin, plectin, and laminin. Their interactions and how they connect the keratinocyte cytoskeleton to the underlying collagen have already been described. Antibodies directed against the components of the hemidesmosome can be seen in the pemphigoid group of disease states. 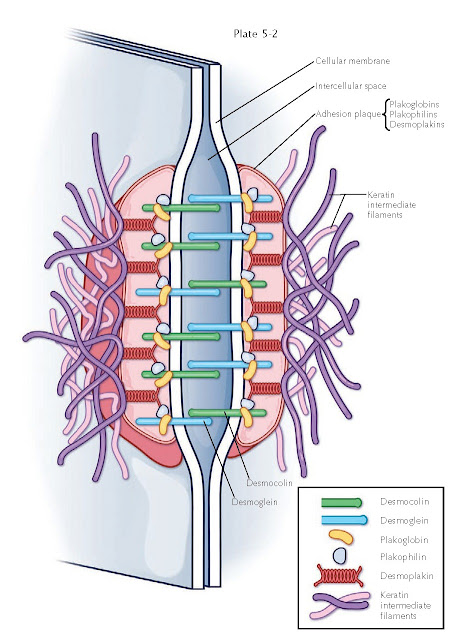 The desmosome provides the major connection between one keratinocyte and another. It is the most complex of the keratinocyte connection points, which also include tight junctions, adherens junctions, and gap junctions. Desmosomes are present on all keratinocytes from the stratum basalis through the stratum granulosum. Once they reach the stratum corneum, the desmosomes start to degrade and break apart as the corneocytes are desquamated off the surface of the skin. The main purpose of desmosomes is to connect the actin cytoskeleton of one keratinocyte to that of the adjacent keratinocyte. They achieve this goal through a series of highly coordinated protein connections. The main proteins that allow for the connection between adjacent cells and the strength of the connection are the cadherin proteins, desmoglein and desmocollin. These are calcium-dependent adhesion molecules. Desmoglein and desmocollin are transmembrane proteins.

A desmocollin protein from one keratinocyte interacts with a desmoglein protein from the adjacent keratinocyte in a one-to-one ratio. There is more than one type of desmogleins and desmocollins, but they all interact similarly. Some of the subtypes are expressed at slightly different rates in various locations such as mucous membranes and the different levels of the epidermis. Each desmoglein or desmocollin molecule is anchored within the keratinocyte to plakoglobin, which in turn is bound to a group of proteins named desmoplakins. The desmoplakin proteins ultimately connect with the intercellular actin cytoskeleton.

The pemphigus group of diseases are autoimmune blistering diseases caused by the formation of auto-antibodies against desmoglein and, in some cases, also against desmocollin. These autoantibodies interrupt the cell-to-cell adhesion process, resulting in su erficial blistering of the skin and mucous membranes.