Vitiligo is a common acquired skin disease with multiple clinical variants. Vitiligo occurs because of loss of function or complete loss of melanocytes within the epidermis and follicular epithelium. There are many theories as to its development, but it is believed to be an autoimmune skin disease. Vitiligo may be seen in association with other autoimmune conditions. Patients afflicted with vitiligo can be psychologically affected by the disease.

Clinical Findings: Approximately 1% of the population is affected by vitiligo. It has been reported to occur at any age, but it is most common in the teenage years and the early twenties. There is no sex or racial predilection. A small percentage of cases are familial in nature. The exact inheritance pattern and the reason for this configuration are unknown. Many clinical variants of vitiligo exist. All forms have varying degrees of involvement of the skin. When melanin is no longer produced, patients are left with depigmented macules. These macules appear as stark white areas of skin, which can be a few millimeters to many centimeters in diameter. The areas of involvement have a well-defined border region. Hair within the areas of depigmented skin may also be depigmented. With time, the loss of pigment in the hair becomes more prominent. Hair depigmentation within the regions of vitiligo is not universal, and normal-appearing pigmented hair may grow within such an area. Most commonly, no inflammation is seen, and the areas are completely asymptomatic in nature. 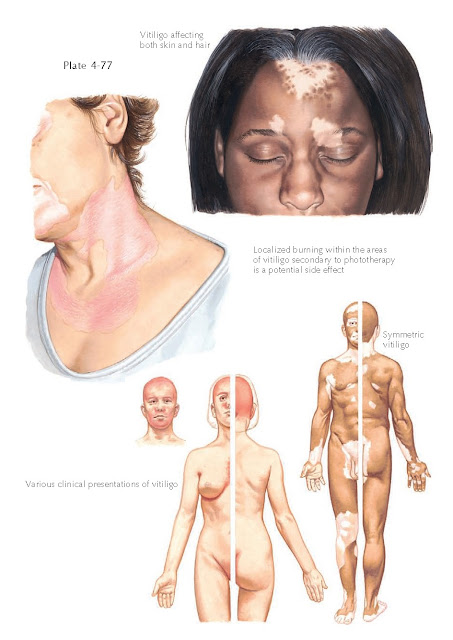 Patients with Fitzpatrick type I skin are less obviously affected than those with Fitzpatrick type VI skin. The areas of vitiligo will not tan after sun exposure. Sun exposure typically makes the difference between affected and nonaffected skin more noticeable, because it increases melanin production in the unaffected skin, resulting in a darkening or tanning of the skin around the vitiliginous region. The areas of vitiligo are prone to easy burning and must be protected.

Various clinical variants or classifications of vitiligo exist, including localized, generalized, linear, trichrome, and blaschkoid variants. The generalized form can cause near-universal involvement of the skin, with a only few tiny islands of normal-appearing skin remaining within the areas of vitiliginous skin. Linear areas of involvement are rare and typically affect a limb. Blaschkoid vitiligo follows the embryological Blaschko lines. Histology: There is no inflammation, and hematoxylin and eosin staining of the biopsy specimen may appear normal unless compared with a biopsy specimen from unaffected skin. When this is done, the lack of melanin production and melanocytes is appreciated. Special staining to accentuate melanocytes can make them much more visible.

Pathogenesis: The exact cause of vitiligo has yet to be determined. The leading theory on its development is the autoimmune theory. An unknown trigger causes the immune system to begin destroying melanocytes. The immune system recognizes melanocytes as somehow abnormal and causes their destruction. The autoimmune theory also may explain why vitiligo is seen clustered with diabetes, thyroid disease, and other autoimmune conditions.

Treatment: Patients with vitiligo should be screened for underlying autoimmune conditions such as diabetes and thyroid disease. The treatment of these conditions has not been shown to help the vitiligo. No therapy is needed. For those patients who seek treatment, many therapies are available, mostly on an anecdotal basis. Potent topical corticosteroids and topical immunomodulators such as tacrolimus and pimecrolimus have been used. Phototherapy with narrow-band ultraviolet B light (UVB) and with psoralen + ultraviolet A light (PUVA) has been used successfully. The risk of burning is very high in the affected regions, and care should be used when starting this treatment. Small areas have been treated successfully with surgical techniques involving autotransplantation of skin from unaffected regions. If the therapy works, melanocyte rejuvenation typically occurs in a speckled pattern centered on the hair follicles. The hair follicle is believed to be a reservoir of melanocytes for repopulation of areas that are devoid of their normal complement of melanocytes.

Rarely, complete depigmentation is undertaken, for those who are so severely affected that only a few islands of normal-appearing skin remain, to allow for a uniform skin tone. Monobenzylether of hydroquinone is used to eliminate any remaining melanocytes and depigment the skin.