NONTUMOROUS LESIONS OF THE PITUITARY GLAND AND PITUITARY STALK

NONTUMOROUS LESIONS OF THE PITUITARY GLAND AND PITUITARY STALK 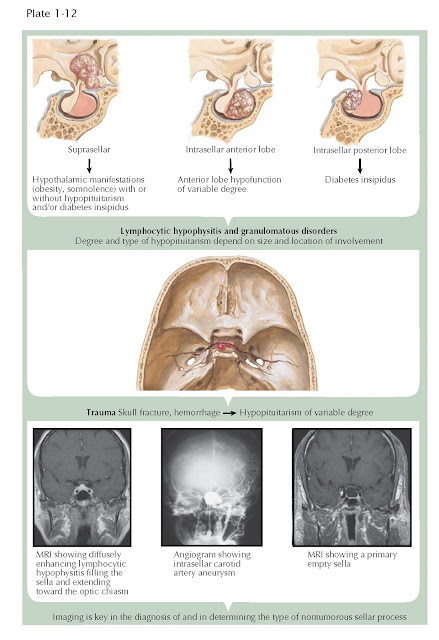 Lymphocytic hypophysitis is an autoimmune disorder characterized by lymphocytic inﬁltration and enlargement of the pituitary gland followed by selective destruction of pituitary cells. The most common clinical setting is in late pregnancy or in the postpartum period. Patients typically present with headaches and signs and symptoms of deﬁciency of one or more pituitary hormones. Frequently, there is a curious preferential destruction of corticotrophs. However, these patients may have panhypopituitarism (including diabetes insipidus [DI]). Magnetic resonance imaging (MRI) usually shows a homogeneous, contrastenhancing sellar mass with pituitary stalk involvement. The pituitary hormone deﬁcits are usually permanent, but recovery of both anterior and posterior pituitary function may occur.

Granulomatous hypophysitis can be caused by sarcoidosis, tuberculosis, Langerhans cell histiocytosis, or Wegener granulomatosis. The granulomatous inﬂammation may involve the hypothalamus, pituitary stalk, and pituitary gland and cause hypopituitarism, including DI.

Head trauma that results in a skull base fracture may cause hypothalamic hormone deﬁciencies, resulting in deﬁcient secretion of anterior and posterior pituitary hormones. Head trauma may lead to direct pituitary damage by a sella turcica fracture, pituitary stalk section, trauma-induced vasospasm, or ischemic infarction after blunt trauma.

Iron overload states of hemochromatosis and hemosiderosis of thalassemia may involve the pituitary, resulting in iron deposition (siderosis) in pituitary cells. Iron overload most commonly results in selective gonadotropin deﬁciency.