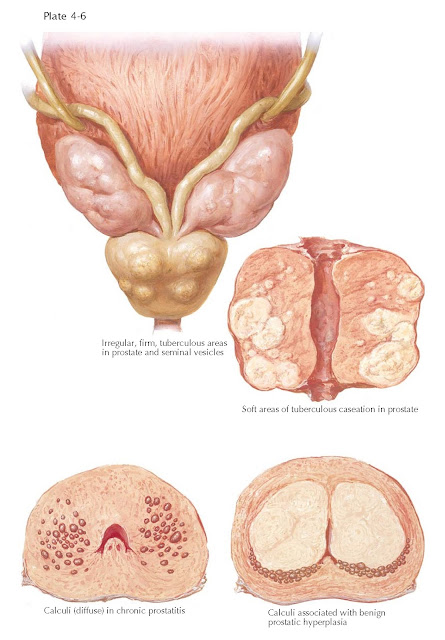 Of men with prostatic tuberculosis, 50% have dysuria and 40% have perineal pain. Patients may also present with male infertility, a well-described complication of prostatic tuberculosis. Sterile urethral discharge or pyuria and terminal hematuria may also be associated with this condition. Rarely, perineal swelling, drainage, and urinary ﬁstula comprise the most overt presentation. Tuberculous prostatitis may also be painless and may remain undiscovered except when palpated by rectal examination in cases of urinary tract or epididymal tuberculosis. When the prostate is involved, its palpation may reveal a normal or enlarged gland that is irregular or nodular in contour, and ﬁrm or granular in consistency. Soft areas can be palpated when caseation is present. Tuberculosis in the prostate does not differ from that encountered elsewhere in the body. Histologically, there is destruction of normal glandular tissue and replacement by a crumbly, yellow mass of caseous material surrounded by ﬁbrous capsules. Healing proceeds with ﬁbrosis and calciﬁcation. After antibiotic treatment, the prostate may become ﬁbrotic.

Prostatic calculi may be found with or without glandular hyperplasia. They contain protein, cholesterol, citrates, and inorganic salts, mostly calcium and magnesium phosphate. Most cases are encountered in patients more than 40 years old. Calculi are located diffusely within dilated acini and this distribution can, though not necessarily, be associated with other pathologic ﬁndings, such as prostatitis. It is difﬁcult to establish whether conditions precede the formation of calculi or vice versa. The symptoms and urinary ﬁndings in cases of calculi are characteristic of chronic prostatitis and not usually due to the presence of calculi alone. However, calculi may be the source of recurrent prostatitis if bacterial infection cannot be cleared in their presence.

Calculi that occur at the junction of the transition and posterior zones of the prostate are called corpora amylacea and are common in patients with benign enlargement of the prostate. They are thought to occur because as prostatic secretions become “inspissated” from the disarray of the duct architecture from benign prostatic hyperplasia they eventually calcify. The diagnosis is usually made when calciﬁcations are visualized on transrectal ultrasound imaging. On rare occasions, calculi protrude into the posterior urethra from the oriﬁce of a prostatic duct and grow into a urethral calculus. In most cases, prostatic calculi are not speciﬁcally treated as they are incidental ﬁndings from prostatic imaging.