Benign prostatic hyperplasia (BPH) is a benign condition of advancing years affecting one-third of men age 50, more than half of men at age 65, and 80% of men in their ninth decade. It may or may not result in voiding symptoms, generally obstructive in nature. In about 15% of cases, symptoms are sufﬁciently severe or obstructive uropathy ensues that requires surgical intervention. A clear association between BPH and prostate cancer has not been demonstrated and the former is not considered a risk factor for development of the latter. 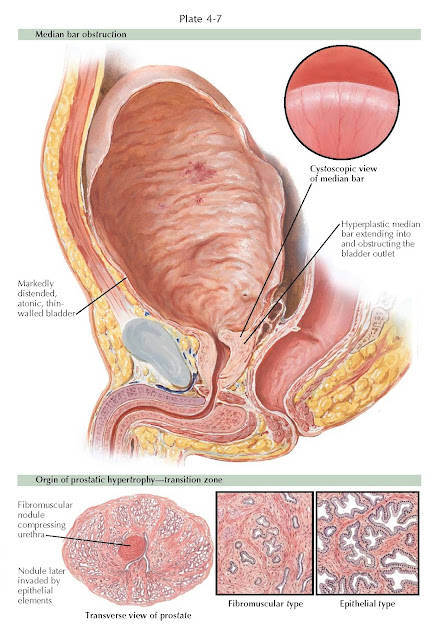 The term benign prostatic hyperplasia (often termed hypertrophy) is currently used to designate a constellation of voiding symptoms that occurs with age, regardless of prostatic histopathology. These symptoms include decreased force of stream, hesitancy, straining, incomplete bladder emptying, and nocturia. Such symptoms are generally referred to as “obstructive” in nature. Irritative symptoms can also be associated with BPH and include urinary frequency, urgency, and occasionally dysuria. BPH has been used synonymously with “prostatism” and “bladder outlet obstruction,” implying that obstruction to urinary outﬂow from prostatic enlargement is the etiology. More recently, it has been recognized that prostatic enlargement is not necessary for such symptoms. Furthermore, women may experience similar symptoms with age. Thus, lower urinary tract symptoms is currently the preferred term to describe the complex of urinary symptoms that occur with age.

Histologically conﬁrmed BPH has a neoplastic character, with nodular lesions located throughout the transition zone of the prostate that may grow without limit. These nodules consist of distinct tissue types and do not represent diffuse hyperplasia or hypertrophy of preexisting prostatic glands. Early lesions consist of ﬁbromyomas that represent proliferation of smooth muscle and connective tissue surrounding the ducts of the urethral and submucosal glands. The ﬁbromyomatous structure is similar to that of uterine myomas (see Plate 8-25), except that prostate nodules usually contain epithelial elements arising from invasion of epithelial buds from adjacent prostatic ducts. Early nodules may vary from pure ﬁbromuscular tissue with little or no epithelial component to adenomas in which epithelial elements are profusely found. The ﬁbromuscular stroma lacks the elastic tissue present in the normal prostate. The epithelial elements are composed of hyperplastic columnar cells that form numerous enfolding papillae and are morphologically similar to those of the normal prostate, except with reduced secretory activity. The vast majority of nodules arise in a well- deﬁned area in periductal tissue of the short urethral and submucosal glands within the transition zone. However, adenomas may also originate in the ﬁbromuscular stroma surrounding the acini of the central and, rarely, the anterior zone of the prostate rather than the usual periurethral site. Hyperplasia is highly unusual in the posterior zone.

As the nodules grow, they compress the normal acini of the peripheral zone into a thin rim of tissue between the growing hyperplastic nodule and the prostatic capsule. These compressed “normal” glands, sometimes only 1 mm thick, comprise the so-called surgical (false) capsule, which is not the same as the true ﬁbrous capsule that surrounds the entire prostate. On microscopic examination, the ducts and acini of the peripheral zone are ﬂattened and compressed.

Benign prostatic hyperplasia can adopt a number of different conﬁgurations that result in urinary symptoms. One variety that presents with the early onset of voiding symptoms is median bar or bladder neck hyperplasia, which consists of exuberant growth of ﬁbromuscular tissue near the bladder outlet. The tissue may be more ﬁbrotic than muscular and may contain hyperplastic epithelial elements originating from the suburethral glands of Albarrán (see Plate 4-2) beneath the bladder outlet. The obstructing median bar is not palpable on rectal examination but is suspected from obstructive symptomatology. The diagnosis is conﬁrmed by direct visualization through the cystoscope. Depending on symptom severity, treatment can begin with daily alpha-blockers or with t ansurethral endoscopic incision of the bladder neck.