Prostatic enlargement due to benign prostatic hyperplasia (BPH) presents with several typical growth conﬁgurations. The nodules usually enlarge in a symmetrical manner, although in some instances one side may predominate. On rectal examination, this may present as prostatic asymmetry and, without induration or nodularity, is not suspicious for carcinoma. As nodules grow, they have been termed median, lateral, and anterior lobe hyperplasia, according to their location cystoscopically. These designations are misnomers because the prostate is generally not a lobulated organ. These terms simply designate general cystoscopic locations. 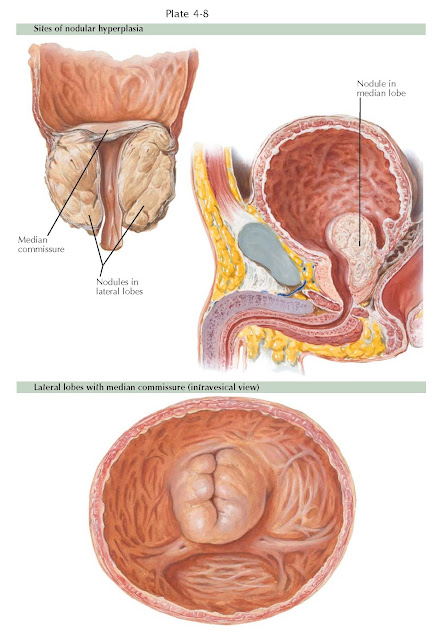 The most frequent types of prostatic enlargement are “bilobular” (the two lateral lobes) and “trilobular” (the two lateral plus the median lobe) hyperplasia. Isolated median lobe enlargement may occur without lateral lobe enlargement, but it is much less common. Rarely, nodules can originate in the roof of the urethra within the anterior zone and project downward into the bladder, giving the appearance of a rounded “anterior” lobe.

The origin of BPH remains unclear. Because hyperplasia arises mainly within the transition zone that contains an unusual juxtaposition of glandular and stromal elements, one theory purports that BPH develops as a consequence of stromal cell dysregulation and is induced by the effects of androgens and estrogens. This change in the prostatic stromal–epithelial cell interactome that occurs with age may lead to an inductive effect on prostatic growth and is termed the embryonic reawakening theory. Another theory, termed the DHT hypothesis, suggests that a shift in prostatic androgen metabolism occurs with aging that leads to an abnormal accumulation of dihydrotestosterone (DHT) and stimulating prostatic enlargement. The stem cell theory of BPH advocates an increase in the total prostatic stem cell number and/or an increase in the clonal expansion of stem cells into amplifying and transit cells with age. What is clear is that aging and the presence of a functional testis are the two established risk factors for the development of BPH. There are ethnic trends in occurrence, as the condition is more common in Caucasian and black men than it is in Asian men. Vascular disease, infection, and sexual activity do not correlate with BPH, but it is less likely to occur in hypogonadal men. The active androgen responsible for prostatic growth and development is DHT, and the administration of 5-alpha reductase inhibitors, commonly prescribed for urinary symptoms due to BPH, will reduce prostatic volume by one-third over 6 months.