Normal gastric physiology is best described in terms of its fasting patterns and the responses of the stomach in response to food intake (the fed response).

Fasting gastric contractile patterns are characterized by a cyclic motor phenomenon called the migrating motor complex. In healthy people in the fasting state, it occurs approximately once every 90 minutes, most prominently at night. The fasting state generally starts approximately 4 hours after meal ingestion, when the stomach has completely emptied a meal. The fasting contractile patterns consist of a period of quiescence (phase I),  a period  of intermittent  pressure activity (phase II), and an activity front, during which the stomach and small intestine contract at their highest frequency (phase III). During phase III of the migrating motor complex, contraction frequencies reach 3 a minute in the stomach and 11 or 12 a minute in the proximal small intestine. This interdigestive contraction wave (intestinal housekeeper) progresses down the stomach and small intestine and serves to help empty the stomach of indigestible solids and transport them down the small intestine into the colon. These contractile pressures, especially in the fasting period, are generally recorded with antroduodenal manometry, a catheter recording pressures from the stomach (primarily antral region) and the small intestine (primarily duodenum). 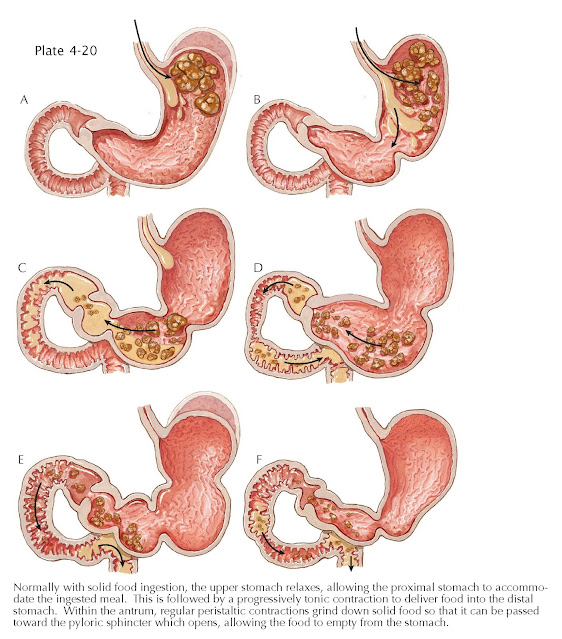 Normally with solid food ingestion, the upper stomach relaxes (gastric accommodation), allowing the proximal stomach to accommodate the ingested meal. This is followed by a progressively tonic contraction of the fundus to deliver food into the distal stomach. Within the antrum, regular peristaltic contractions grind down solid food so that it can be passed down the stomach toward the pylorus. The pyloric sphincter opens in a coordinated fashion with antral contractions, allowing the smaller particle size (food chyme) to empty from the stomach into the small intestine. Larger food particles are retropulsed back toward the body of the stomach, where they are ground down further; this process is repeated until the particles are small enough to empty through the pylorus.

Gastric accommodation is a postprandial, vagally mediated reflex resulting in reduced gastric tone, primarily in the proximal stomach, that occurs with eating a meal. Gastric accommodation provides a reservoir for ingested foods without a significant increase in intra-gastric pressure.

The accommodation reflex has two principal components. Receptive relaxation occurs within seconds of eating and is triggered by both oropharyngeal and gastric stimulation. This response involves relaxation of both the lower esophageal sphincter and proximal stomach. Adaptive relaxation is a slower process triggered by gastric or duodenal distention and is perhaps also modified by specific nutrients. The accommodation reflex is vagally mediated and represents the balance between the cholinergic excitatory drive and nonadrenergic noncholinergic inhibitory input. The afferent signal is generated by activation of stretch-sensitive mechanoreceptors in the stomach wall, osmo- receptors, and chemoreceptors in the stomach and duodenum. The efferent nonadrenergic noncholinergic signal involves nitric oxide as the principal neurotransmitter. A role for vasoactive intestinal polypeptide has also been suggested.

GASTRIC EMPTYING OF A MEAL

Normal gastric emptying reflects a coordinated effort between the fundus, antrum, pyloric sphincter, and duodenum. Coordination of these fundic-antral- pyloric-duodenal motor events is carefully regulated and governed by (1) gastrointestinal electrical activity through the interstitial cells of Cajal, (2) neural connectivity through enteric nerves in the enteric nervous system, and (3) vagal efferent nerves from the central nervous system (CNS). Feedback from nutrients and the volume in the stomach and small bowel affects the process of gastric emptying and is conveyed through nlocal enteric sensory nerves, vagal afferent nerves, and hormones.

Fundic and antral smooth muscle contractions are primarily cholinergically mediated. Rhythmic antral contractions, generally at 3 cycles per minute, triturate large food particles into an appropriate size for intestinal digestion. The rate of these contractions is governed by the electrical pacemaker of the stomach and the interstitial cells of Cajal.

Pyloric sphincter relaxation, often synchronized with antral contractions, allows smaller food particles and chyme to pass out of the stomach into the duodenum. Pyloric relaxation is mediated through release of inhibitory nerves, especially nitric oxide and, possibly, vasoactive intestinal polypeptide.

Solid foods and liquids leave the stomach at different rates. Liquids empty at an exponential rate because their emptying depends primarily on the gastroduodenal pressure gradient and less on pyloric opening. Solids are initially retained selectively within the stomach until particles have been triturated to a size smaller than 2 mm, at which point they can be emptied at a linear rate from the stomach.