The stomach has three anatomic regions, the fundus, body, and antrum. It is functionally divided into two glandular regions, the oxyntic and pyloric mucosae. The oxyntic gland mucosa contains parietal cells (that produce gastric acid (hydrogen chloride [HCl]) producing) and forms 80% of the fundus and body. The pyloric gland mucosa contains G cells and forms 20% of the antrum. Chief cells predominate at the base and secrete pepsinogen and leptin. The distinct neuroendocrine cell types and their physiologic functions are the (1) enterochromaffin cells, which contain atrial natriuretic peptide, somatostatin, serotonin, and adrenomedullin; (2) enterochromaffin-like cells, which contain histamine; (3) D cells, which contain somatostatin; and (4) cells that contain ghrelin and obestatin. 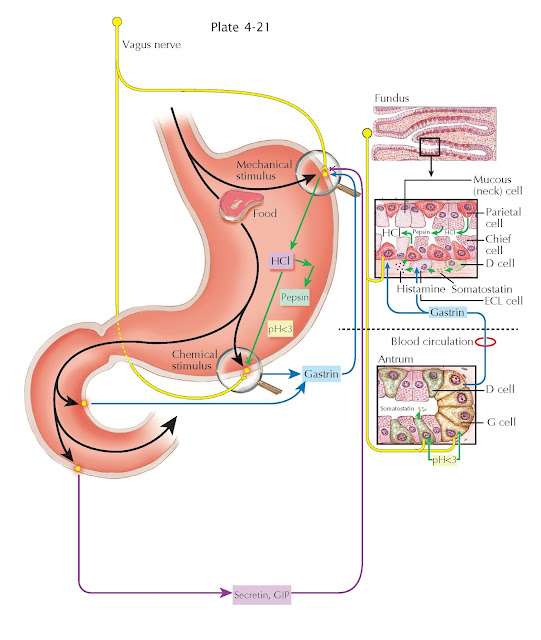 The physiologic stimulation of acid secretion is divided into three phases, the cephalic, gastric, and intestinal phases.

•    The cephalic phase is activated by the thought, taste, smell, and sight of food. Swallowing is mediated mostly by cholinergic/vagal mechanisms. The conditioned (psychic) secretion (described by Pavlov) is the principal component of the cephalic phase; hence, dogs were conditioned to associate the ringing of a bell with a meal. Anticipation of food is a powerful trigger for increasing gastric secretions. Other upregulated systems include the pancreas and gallbladder.

•      The gastric phase is due to the chemical effects of food and distention of the stomach mediated by gastrin with a marked increase in gastric blood flow supplying the metabolic requirements of the actively secreting cell types.

•    As the meal moves out of the stomach into the duodenum, the intestinal phase occurs. The buffering capacity of the lumen is reduced and the pH begins to fall. This feedback response involves several endocrine and paracrine factors, including gastric inhibitory polypeptide and cholecystokinin (CCK).

Basal acid output is approximately 10% of the maximal acid output of the stimulated parietal cell. There is diurnal variation of basal acid levels, with night levels being higher than day levels.

The parietal cell contains another inhibitory receptor for prostaglandin E2 (PGE2) which inhibits gastric acid secretion by decreasing intracellular cyclic adenosine monophosphate levels and gastrin secretion and stimulates somatostatin secretion. Gastric acid facilitates digestion of proteins and absorption of calcium, iron, and vitamin B12. It also suppresses growth of bacteria, preventing enteric infections and small intestinal bacterial overgrowth. Low levels of acid are related to chronic atrophic gastritis and precancerous gastric conditions. Gastric acid secretion from parietal cells is regulated by overlapping pathways that include endocrine (gastrin), paracrine (histamine and somatostatin), neural (acetylcholine), and probably autocrine (transforming growth factor alpha) factors. The source of gastric acid secretion is the parietal cell, located in the glands of the fundic mucosa. Its basolateral membrane contains receptors for histamine, gastrin, and acetylcholine; potentiated secretion may occur when all are present simultaneously. In the resting state, parietal cells are filled with secretory vesicles that form channels that drain to the apical lumen. The secretory membrane lining these structures contains the hydrogen- potassium-ATPase acid–secreting pump. This pump is always active, but it exists in a short-circuited state in resting vesicles because of inactive exchange. With stimulation, this pathway becomes active, and hydrogen-potassium exchange occurs.

With ingestion of a protein meal, gastrin is released; it enhances gastric acid secretion from parietal cells through release of histamine from enterochromaffin- like cells and has a direct effect on parietal cells.