The main role of the stomach is to prepare food for digestion and absorption by the intestine. The parietal cells produce hydrochloric acid in gastric secretions. Various neural and hormonal mediators contribute to gastric function. The acid secretory process requires functional receptors, signaling pathways, channels, transporters, and acid-secreting pumps (H+/K+- ATPase). The level of acidity depends upon the relative proportions of parietal and nonparietal secretions; hence, the more rapid the rate of secretion, the higher the level of acidity. 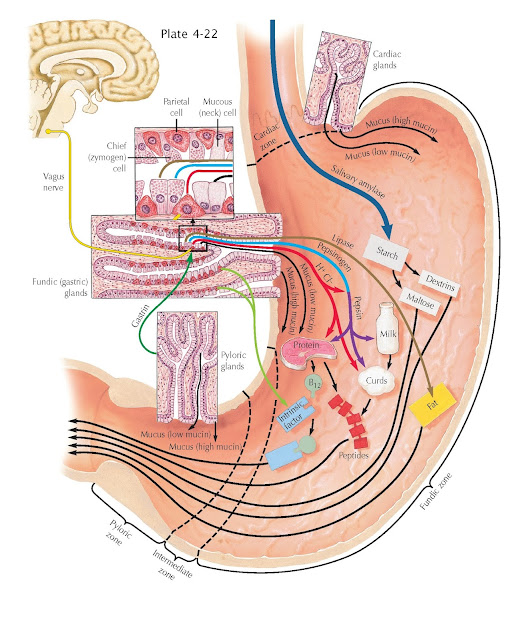 Rebound acid hypersecretion occurs after therapy with proton pump inhibitors or H2 receptor antagonists has ceased. Increased HCl secretion has been seen at night and with the acid secretory response to a meal. The alkaline tide (decrease in urinary acidity after a meal) is generally attributed to increased alkalinity of the blood resulting from the secretion of HCl. Its occurrence is influenced by the rate of formation of HCl and its absorption from the gut. Additional influencing factors include alkaline digestive secretions (mainly pancreatic), the neutralizing capacity of the food eaten, respiratory adjustments after a meal, and the diuretic effect of a meal.

Pepsin, the principal enzyme of gastric juice, is stored in the chief cells as pepsinogen. At a pH below 6.0, pepsinogen is converted to pepsin. The free pepsin activates the continued transformation of pepsinogen to pepsin. The chief cells are the most common cells in the gastric mucosa, found in the body, fundus, and antrum of the stomach, as well as in the duodenum. Pepsinogen is stimulated by acetylcholine, histamine, and CCK2 and inhibited by somatostatin.

Powerful stimuli for gastrin secretion include gastric juice rich in pepsin, hypoglycemia (vagal stimulus), or direct electrical stimulation of the vagus nerves. The pepsinogen of the gastric chief cells is also secreted internally into the bloodstream and appears in the urine as uropepsinogen.

As mentioned previously, gastric acid secretion is divided into cephalic, gastric, and intestinal phases. Mucus is excreted from neck cells and surface mucus cells in the stomach and Brunner glands after stimulation with acetylcholine, secretin, and prostaglandins. Its function is to provide a protective layer over the gastric and duodenal mucosa. Mucus slows the diffusion of acid from the lumen to the mucosa, provides lubrication for the passage of food, and maintains a near-normal pH at the mucosal surface because of its content of bicarbonate. It is dissolved by pepsin and N-acetylcysteine and easily penetrated by bile salts, ethanol, and nonsteroidal anti inflammatory drugs (NSAIDs), leading to mucosal damage. Mucosal repair is very quick and occurs through the movement of already established mature mucosal cells over the basal lamina.

Parietal cells synthesize and secrete intrinsic factor, which plays a key role in absorption of vitamin B12 in the terminal ileum. NSAIDs inhibit the cyclooxygenase (COX) enzyme in the prostaglandin production pathway and cause damage to the gastric mucosa. Currently there are two isoforms, COX-1 and COX-2. The COX-1 pathway results in production of PGE2, and the COX-2 pathway is involved mainly in inflammatory events. The selective COX-2 inhibitors decrease inflammation without affecting PGE2 production. Mucosal efenses can also be affected by H. pylori infection.