INNERVATION OF STOMACH AND DUODENUM

INNERVATION OF STOMACH AND DUODENUM

The stomach and duodenum are innervated by the visceral efferent sympathetic and parasympathetic nerves, along which run visceral afferent fibers.

The sympathetic supply to the stomach emerges in the anterior spinal nerve roots as presynaptic axons projecting from cells within the intermediolateral cell column of the spinal cord, particularly from the 5th to the 9th or 10th thoracic segments. They are carried from the spinal nerves in white rami communicans that pass to the adjacent sympathetic ganglia located along the length of the sympathetic trunk. The sympathetic axons that will supply the stomach pass through the ganglia without synapsing and travel along the thoracic vertebrae as the thoracic splanchnic nerves, which pass through the diaphragm posteriorly to reach celiac ganglia. Generally, these axons will form synapses with postsynaptic nerve cells in the celiac and superior mesenteric ganglia. The postsynaptic axons of these cells are conveyed to the stomach and duodenum in the celiac plexus and the superior mesenteric plexus. We will concentrate on the former, as it is the primary nerve supply to the stomach and proximal duodenum. The axons of the celiac plexus adhere to the walls of the arteries that arise from the celiac arterial trunk; they may be referred to as the hepatic plexus, splenic plexus, or left gastric plexus, depending upon which artery they follow. The sympathetic axons of each plexus run alongside presynaptic parasympathetic axons and visceral afferent axons.

The splenic plexus gives off subsidiary nerve plexuses around its pancreatic, short gastric, and left gastroomental branches, and these supply the structures indicated by their names. A filament may curve upward to supply the fundus of the stomach.

The hepatic plexus gives off subsidiary plexuses along all its branches. These, following the right gastric artery, supply the pyloric region, and the gastroduodenal plexus accompanies the artery between the first part of the duodenum and the head of the pancreas, supplying fibers to both structures and to the adjacent parts of the common bile duct. When the artery divides into its anterior superior pancreaticoduodenal and right gastroomental branches, the nerves also subdivide and are distributed to the second part of the duodenum, the terminations of the common bile and pancreatic ducts, the head of the pancreas, and the parts of the stomach. The part of the hepatic plexus lying in the free margin of the lesser omentum gives off one or more (hepatogastric) branches that pass to the left between the layers of the lesser omentum to the cardiac end and lesser curvature of the stoma h; they unite with and reinforce the left gastric plexus.

The superior mesenteric ganglion is primarily involved in supplying postsynaptic axons to the midgut organs. It does supply the distal duodenum by means of axons that follow the anterior and posterior inferior pancreaticoduodenal arteries to reach the duodenum and pancreatic head. 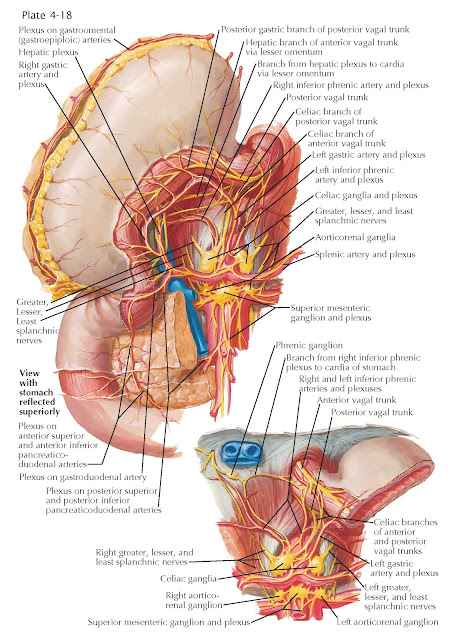 The parasympathetic supply of the stomach and duodenum arises in the dorsal vagal motor nucleus in the floor of the fourth ventricle. The dorsal vagal motor nuclei contribute presynaptic parasympathetic axons to the left and right vagus nerves, which leave the jugular foramen to innervate thoracic and abdominopelvic organs. We will ignore the activity of the vagus nerves in the thorax other than to mention that the left and right vagus nerves closely associate with the esophagus and interweave to produce the anterior and posterior vagal trunks, which pierce the diaphragm alongside the esophagus to enter the abdominal cavity. The anterior vagal trunk travels on the anterior aspect of the stomach and across the hepatogastric ligament to innervate some of the liver and gallbladder. Frequently, one branch, the greater anterior gastric nerve, is larger than the others. The various gastric branches can be traced for some distance beneath the serous coat before they sink into the muscle coats, and although they communicate with neighboring gastric nerves, a true anterior gastric plexus in the accepted sense of the term does not usually exist. The pyloric branches (not illustrated) arise from the anterior vagal trunk or from the greater anterior gastric nerve and run to the right between the layers of the lesser omentum before turning inferiorly through or close to the hepatic plexus to reach the pyloric antrum, pylorus, and proximal part of the duodenum.

Viscerosensory activity related to the stomach and duodenum is divided into two categories, visceral pain and normal visceral reflexive stimuli. The stomach is insensitive to ordinary tactile, painful, and thermal stimuli, although it responds strongly to tension, ischemia, and chemical irritations as visceral pain. Visceral pain fibers travel in a retrograde fashion along the sympathetic innervation of the stomach; therefore, visceral pain axons traveling along the left gastric, right gastric, left gastroomental, or right gastroomental plexuses would eventually reach the celiac ganglion. Without synapsing, such an axon would continue along the greater thoracic splanchnic nerves, through the sympathetic chain ganglia, and then through the white rami communicans, anterior ramus, and spinal nerve. At this time, being afferent, the axon would travel along the posterior root to reach the spinal cord. Prior to reaching the spinal cord, the axon encounters (but does not synapse within) its nerve cell body. The nerve cell bodies of these viscerosensory axons are located in the posterior (dorsal) root ganglia. Because these nerve cells are pseudounipolar, their axon extends from the target tissue to reach the cell body but also proximally to reach the posterior gray horn of the spinal cord.

Nonpainful, reflexive stimuli from the stomach travel in a retrograde manner along its parasympathetic innervation. Because all foregut organs receive their presynaptic parasympathetic innervation via the vagus nerves, reflexive visceral afferents from the stomach ascend along the vagus nerve to reach the brainstem and then project to the inferior aspect of the solitary nucleus. The cell bodies for these axons are located in the inferior vagal ganglion, which is located near the point at which the vagus nerves exit from the right and left jugular foramina.