The lymph from the gastric wall collects in the lymphatic vessels, which form a dense subperitoneal plexus on the anterior and posterior surfaces of the stomach. The lymph flows in the direction of the greater and lesser curvatures, where the first regional lymph nodes are situated. On the upper half of the lesser curvature (i.e., the portion near the cardia) are the left gastric lymph nodes, which are connected with the lymph nodes around the cardia. Progressing around the lesser curvature may be a few right gastric lymph nodes. Superior, inferior, and posterior to the pylorus are located the suprapyloric, subpyloric, and retropyloric lymph nodes, respectively. On the greater curvature, following the trunk of the right gastroomental artery and distributed in a chainlike fashion within the gastrocolic ligament, are the right gastroomental lymph nodes. From these nodes the lymph flows to the right toward the subpyloric nodes, which are situated anterior to the head of the pancreas, inferior to the pylorus and the first part of the duodenum. There are a few smaller left gastroomental lymph nodes in the part of the greater curvature nearest to the spleen. For purposes of simplification, a distinction can be made between four different drainage areas into which the gastric lymph flows, although, in point of fact, these areas cannot be so rigidly separated. The lymph from the upper left anterior and posterior walls of the stomach (excluding the far left fundus and body) drains through the left gastric nodes and nodes around the cardia. From there, lymphatic fluid follows the left gastric artery and the coronary vein toward the vascular bed of the celiac artery. Included in this system are additional left gastric lymph nodes near the left crus of the diaphragm. The pyloric segment of the stomach, in the region of the lesser curvature, discharges its lymphatic fluid into the right superior pancreatic lymph nodes, partly directly and partly indirectly, via the small suprapyloric nodes. The lymphatic fluid from the left region of the fundus (i.e., adjacent to the spleen) flows along lymphatic vessels within the gastrosplenic ligament. Some of these lymphatics lead directly to the left superior pancreatic lymph nodes, and others move indirectly via the small left gastroomental lymph nodes and via the splenic nodes lying within the hilus of the spleen. Lymph from the distal portion of the inferior stomach along the right greater curvature and inferior pyloric region collects in the right gastroomental lymph nodes. From here, the lymph flows to the subpyloric nodes, which lie anterior to the head of the pancreas, partly posterior and partly inferior to the pylorus. Leading to these nodes are also a few lymphatics from that part of the greater curvature that is immediately adjacent to the pylorus. From the subpyloric lymph nodes, which are also connected with the superior mesenteric nodes by way of prepancreatic lymphatics, the lymph flows to the right superior pancreatic nodes through lymphatics situated behind the pylorus and duodenal bulb. 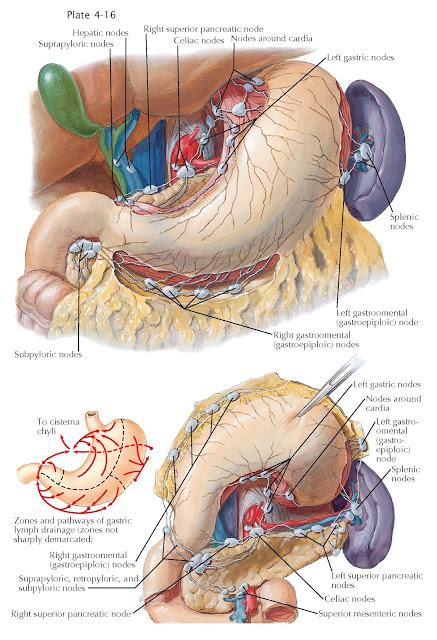 From the left gastric nodes, right superior pancreatic nodes, and left superior pancreatic nodes, lymphatic fluid leads to the celiac lymph nodes, situated superior to the pancreas at the base of the celiac arterial trunk and its branches. From the celiac lymph nodes, lymph flows through the gastrointestinal lymphatic trunk to reach the thoracic duct, in the initial segment of which is generally a more or less pronounced expansion, called the cisterna chyli.

The thoracic duct projects superiorly through the posterior and superior mediastinum to open into the angle formed by the left subclavian and left jugular veins, often receiving the left subclavian lymphatic trunk prior to insertion. In cases of gastric tumor, palpable metastases may sometimes develop in t e left supraclavicular (Virchow) lymph nodes in this area.