VENOUS DRAINAGE OF STOMACH AND DUODENUM

VENOUS DRAINAGE OF STOMACH AND DUODENUM

Venous blood from the stomach and duodenum, along with that from the pancreas and spleen and that of the remaining portion of the intestinal tract (except the anal canal), is conveyed to the liver by the portal vein. The portal vein resembles a tree, in that its roots (capillaries) ramify in the intestinal tract, whereas its branches (sinusoids, capillaries) arborize in the liver. From its point of formation to its division within the liver into right and left branches, the portal vein measures from 8 to 10 cm in length and from 8 to 14 mm in width. Typically, the portal vein is formed by the union of the superior mesenteric vein with the splenic vein, posterior to the neck of the pancreas. Its tributaries show many variations that are extremely important in operative procedures. The inferior mesenteric vein opens most commonly into the splenic vein (38%) but, in many instances, drains into the junction point of the superior mesenteric and splenic veins (32%) or into the superior mesenteric vein (29%). Occasionally, it bifurcates, opening into both veins. 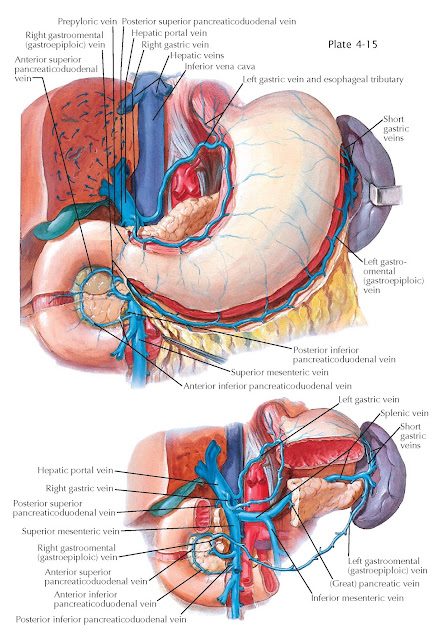 The pancreaticoduodenal veins run alongside the anterior and posterior arterial pancreaticoduodenal arcades. The anterior and posterior inferior pancreaticoduodenal veins fuse into a single vein that usually joins the superior mesenteric vein below the entry of the right gastroomental vein. Frequently, the posterior arcade empties directly into the portal vein. The posterior superior pancreaticoduodenal vein typically drains to the portal vein. The cystic vein, formed by superficial and deep tributaries from the gallbladder, may enter the portal vein directly or its right branch, or drive to the liver directly. The majority of pancreatic venous branches, arising from the body and tail of the pancreas, join the splenic vein along its course, whereas others terminate in the upper part of the superior or inferior mesenteric vein or left gastroomental vein. The left inferior phrenic vein receives a tributary from the cardioesophageal region of the stomach and, usually, enters the suprarenal vein but, in some instances, joins the renal vein.

Because all larger vessels of the portal system are devoid of valves, collateral venous circulation in portal obstruction is readily effected via communications with the caval system.