No other region in the body presents more diversified collateral pathways of blood supply than the foregut organs, the stomach, duodenum, pancreas, spleen, liver, and gallbladder. Because of the multiplicity of its blood vessels and the loose arrangement of its connective tissue, the greater omentum is exceptionally well adapted as a terrain of compensatory circulation, especially for the liver and spleen, when either the hepatic or splenic artery is occluded. The stomach may receive its blood supply from 6 primary and 6 secondary sources; the pancreas from the hepatic, splenic, and superior mesenteric; the liver from 3 primary sources (celiac, superior mesenteric, and left gastric) and, secondarily from communications with at least 23 other arterial pathways. In view of the relational anatomy of the splenic artery, it is quite obvious that most of the collateral pathways to the upper abdominal organs can be initiated via this vessel and its branches and completed through communications established by the gastroduodenal and superior mesenteric arteries. 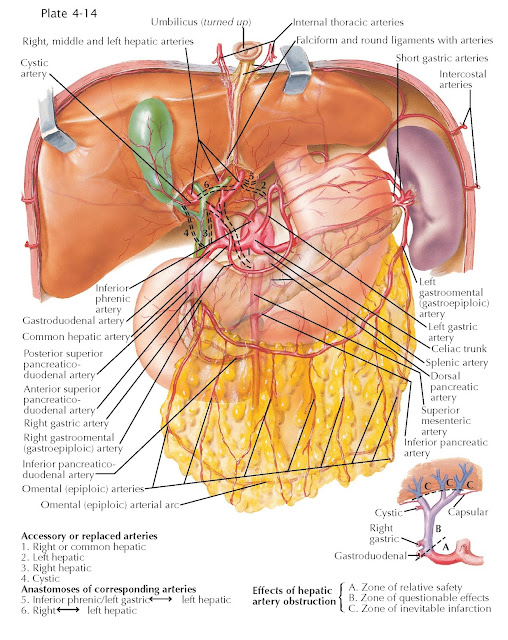 The most important collateral pathways in the upper abdominal organs are the following:

1.  Arcus arteriosus ventriculi inferior. This infragastric omental pathway is made by the right and left gastroomental arteries as they anastomose along the greater curvature of the stomach. The arc gives off ascending gastric and descending omental arteries.

6.   Circulus hepatolienalis. Here an aberrant right hepatic or the entire common hepatic artery, arising from the superior mesenteric artery, may communicate with the splenic artery via a branch of the dorsal pancreatic or gastroduodenal, inferior pancreatic, or artery to the tail of the pancreas.

8. Circulus gastrolienophrenicus. This connection may exist (1) via a communication between the short gastric arteries from the splenic terminals and the recurrent cardioesophageal branches of the left inferior phrenic or (2) via a communication between the latter and the cardioesophageal branches given off by the left gastric, its aberrant left hepatic branch, or an accessory left gastric from the left hepatic.