Although pituitary apoplexy, acute hemorrhage of the pituitary gland, is an uncommon event, it is an endocrine emergency, and prompt diagnosis and treatment are critical. The typical presentation is acute onset of severe headache (frequently described as “the worst headache of my life”); vision loss (the hemorrhagic expansion takes the path of least resistance and extends superiorly and compresses the optic chiasm); facial pain; nausea and vomiting; or ocular nerve palsies (e.g., ptosis, diplopia) caused by impingement of the third, fourth, and sixth cranial nerves in the cavernous sinuses. In addition, patients may have signs of meningeal irritation and an altered level of consciousness. Increased intracranial pressure may result in increasing drowsiness and stupor and may mandate surgical intervention and decompression. Hypothalamic involvement may lead to disorders of sympathetic autoregulation, resulting in dysrhythmia and disordered breathing. Erythrocytes and an increased protein concentration are found in the cerebrospinal ﬂuid of many patients with pituitary apoplexy. This may be a potential source of confusion in differentiating pituitary apoplexy from meningitis or subarachnoid hemorrhage.

The most immediate hormonal deﬁciency is secondary adrenal insufﬁciency, which may lead to hypotension and adrenal crisis. Pituitary apoplexy occurs most often in the setting of a preexisting pituitary macroadenoma or cyst, and the hemorrhage may be spontaneous or triggered by head trauma, coagulation disorders (e.g., idiopathic thrombocytopenic purpura), or anticoagulant (e.g., heparin, warfarin) administration. Rarely, the pituitary tumor apoplexy may be induced by the administration of a hypothalamic-releasing hormone (e.g., gonadotropin-releasing hormone agonist in a patient with a gonadotropin-secreting adenoma) or by the administration of an agent used to treat the pituitary tumor (e.g., bromocriptine for a prolactin-secreting pituitary tumor). The rapid expansion of the sellar contents results in the immediate mass-effect symptoms. In more than 50% of cases of pituitary apoplexy, the apoplectic event is the initial clinical presentation of a pituitary tumor. The risk of pituitary apoplexy is not related to age or gender. 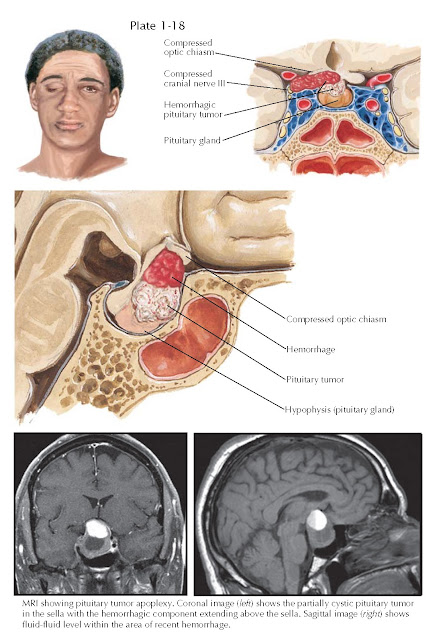 Pituitary imaging with magnetic resonance imaging (MRI) is diagnostic and typically shows signs of intra-pituitary or intra-adenoma hemorrhage, ﬂuid–ﬂuid level, and compression of normal pituitary tissue. Hormonal evaluation typically shows complete anterior pituitary failure (including prolactin). Because of the anatomy of the pituitary circulation and the sparing of the infundibular circulation (inferior hypophysial arteries), the posterior pituitary is infrequently affected by pituitary apoplexy. Thus, diabetes insipidus is rare in patients with pituitary apoplexy.

The clinical course of pituitary apoplexy varies widely in duration and severity. Thus, the appropriate intervention may be difﬁcult to determine. Treatment is aimed at alleviating or relieving local compression that compromises adjacent structures such as the visual individualized pathways.

In addition to anatomic considerations, the endocrine status of the patient must be considered and treated accordingly. The timing of therapy must be individualized on the basis of the symptoms and the severity of the apoplectic event. Neurosurgical intervention is often the most rapid and effective method of decompressing the sella turcica and the surrounding structures and is indicated in the event of mental status changes and other symptoms attributable to increased intracranial pressure. Surgical decompression is also indicated in the absence of these symptoms when the visual pathways are compromised to prevent prolonged ischemia leading to irreversible nerve dysfunction. Although the timing of the surgical intervention does not seem to affect the recovery of ocular palsies, an operation within 1 week after apoplexy in a conscious patient whose condition is stable improves recovery of visual acuity more than an operation performed with a delay of more than 1 week after the event. Although hemorrhagic areas of the pituitary are absorbed over time, reabsorption alone may not occur fast enough for recovery of visual acuity. Therefore, waiting for spontaneous resolution of a visual ﬁeld defect in a patient whose condition is otherwise stable may not be optimal management. In patients with normal visual ﬁelds who lack cranial nerve palsies, observation is a reasonable treatment approach. Stress dosages of glucocorticoids should be initiated in all patients with pituitary apoplexy. Pituitary function may not recover, and long-term pituitary target gland hormone replacement therapy may be needed.