The pituitary gland enlarges during pregnancy (primarily because of lactotroph hyperplasia) and because of its portal venous blood supply is uniquely vulnerable to changes in arterial blood pressure. In 1937, Sheehan suggested that in the setting of severe postpartum uterine hemorrhage, spasm of the infundibular arteries, which are drained by the hypophysial portal vessels, could result in pituitary infarction. If the lack of blood ﬂow continued for several hours, most of the tissues of the anterior pituitary gland infarcted; when blood ﬁnally started to ﬂow, stasis and thrombosis occurred in the stalk and the adenohypophysis. The necrotic areas of the adenohypophysis underwent organization and formed a ﬁbrous scar. Sheehan speculated that variations in the extent and duration of the spasm account for variations in the extent of the necrosis. Today it is recognized that the basic mechanism is infarction secondary to a lack of blood ﬂow to the adenohypophysis. However, it is actually not clear if the infarction is a result of vasospasm, thrombosis, or vascular compression.

In about half of postpartum pituitary infarction cases, the process involves approximately 97% of the anterior lobe, but the pars tuberalis and a small portion of the superior surface of the adenohypophysis are preserved. This remnant retains its structural connections with the hypothalamus and receives portal blood supply from the neural portion of the stalk. Another type of anterior lobe remnant that is sometimes found in these cases is a small area of parenchyma at the lateral pole of the gland without vascular or neural connections with the stalk and hypothalamus. In other instances, a thin layer of parenchyma remains up against the wall of the sella under the capsule. Presumably, these peripheral remnants are nourished by a small capsular blood supply. Normal pituitary function can be maintained by approximately 50% of the gland, but partial and complete anterior pituitary failure results in losses of 75% and 90%, respectively, of the adenohypophysis cells. If more than 30% of the gland is preserved, there is usually sufﬁcient function to forestall the development of acute pituitary failure. 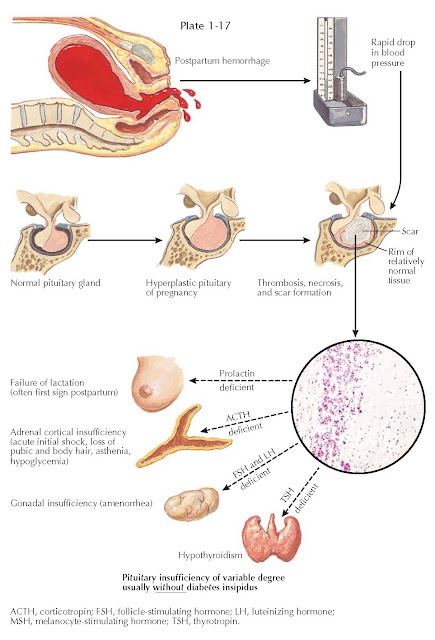 The clinical presentation may range from hypovolemic shock (associated with both the uterine hemorrhage and glucocorticoid deﬁciency) to gradual onset of partial to complete anterior pituitary insufﬁciency, only recognized when the patient is unable to breastfeed and has postpartum amenorrhea. These patients may have all of the signs and symptoms of partial or complete hypopituitarism (see Plates 1-15 and 1-16). The acute loss of glucocorticoids can be fatal if not recognized. These patients require lifelong pituitary target gland replacement therapy. Diabetes insipidus in this setting is rare.

Sheehan syndrome should be suspected in women who have a history of postpartum hemorrhage—severe enough to require blood transfusion—and who develop postpartum lethargy, anorexia, weight loss, inability to lactate, amenorrhea, or loss of axillary and pubic hair. The evaluation involves measuring blood concentrations of the pituitary-dependent target hormones— 8 am cortisol, free thyroxine, prolactin, estradiol, and insulinlike growth factor 1. Sheehan syndrome is one of the few conditions in which hypoprolactinemia may be found. Magnetic resonance imaging shows evidence of ischemic infarct in the pituitary gland with enlargement followed by gradual shrinkage over several months and eventual pituitary atrophy and the appearance of an empty sella.