Severe symptoms of anterior pituitary insufﬁciency appear only when destruction of the adenohypophysis is nearly complete. With progressive destruction (75%), mild hypogonadism becomes more severe, and general symptoms attributable to thyroid and adrenal cortical hypofunction, such as asthenia, fatigue, loss of appetite, and cold intolerance, appear and progress. Complete anterior pituitary failure may occur after surgery for a pituitary macroadenoma.

Atrophy of the gonads is a constant ﬁnding in this disease. A regression of secondary sexual characteristics also occurs. In women, the ovaries become small and ﬁbrous, and the uterus regresses to infantile proportions with an extremely thin layer of endometrium. The external genitalia shrink, as does the vagina, which develops a smooth, atrophic epithelium. The breasts regress, and the areolae lose pigmentation. In men, the penis is small, the testes are shrunken and devoid of rugae, and the prostate is markedly atrophied. In both sexes, the thyroid gland is small, with follicles lined with low cuboidal epithelium. Shrinkage of the adrenal cortex is most obvious in the zona fasciculata and zona reticularis. The zona glomerulosa, which is the site of aldosterone production, does not depend on corticotropin (adrenocorticotropic hormone [ACTH]) secretion, in contrast to the other two layers. The general architectural pattern of the adrenal cortex is maintained, but the cells are poor in lipid content. 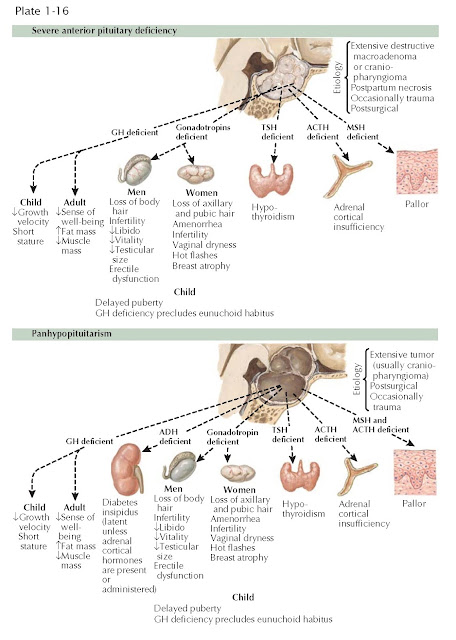 Pallor that is not proportional to the moderate anemia is typically present and is probably attributable to a deﬁciency of ACTH and melanocyte-stimulating hormone. There is a loss of muscle mass—although multifactorial, the lack of growth hormone (GH) is a main contributor. Children have a tendency to have hypoglycemia, which is associated with deﬁciency of adrenal glucocorticoids as well as lack of GH together with poor food intake.

The term panhypopituitarism should be reserved for cases in which all the functions of the adenohypophysis and neurohypophysis are affected. Patients with slowly progressive destructive lesions of this region may ﬁrst manifest diabetes insipidus (DI), which disappears when involvement of the adenohypophysis becomes extreme enough to cause secondary adrenal cortical insufﬁciency. This antagonism between vasopressin and glucocorticoids is further demonstrated by the reappearance of DI when these patients are treated with replacement doses of cortisol.

The treatments for ACTH, thyrotropin (thyroid- stimulating hormone [TSH]), luteinizing hormone (LH), and follicle-stimulating hormone (FSH) deﬁciencies are the same as the treatments for primary deﬁciencies of the respective target glands. For example, for ACTH deﬁciency, hydrocortisone (or other glucocorticoid) is administered to mimic the normal pattern of cortisol secretion with regard to timing and amount, and the patient is instructed on the need for higher doses in times of illness and other stresses. The goal of therapy is resolution of signs and symptoms of adrenal insufﬁciency and avoidance of excess glucocorticoid effect (e.g., Cushing syndrome).

Patients with TSH deﬁciency are treated with levothyroxine. The goal of therapy is a mid-normal serum free thyroxine concentration. In patients with panhypopituitarism, levothyroxine should not be administered until glucocorticoid replacement has been initiated.

Treatment of patients with LH and FSH deﬁciency depends on whether fertility is desired. In men, transdermal testosterone replacement is the treatment of choice for those not interested in fertility. The dosage of testosterone is adjusted for mid-normal blood testosterone concentrations. If fertility is desired, men are treated with gonadotropins. Women can be treated with estrogen-progestin replacement therapy. Women who wish to become fertile can undergo ovulation induction.

Although the role for GH replacement in children with hypopituitarism is clear, GH replacement in adults is optional. Adults with GH deﬁciency can be treated with GH to optimize body fat, muscle mass, bone mineral density, and a sense of well-being. The dosage of GH is titrated to reach a mid-normal insulinlike growth factor 1 concentration.

The only symptom related to prolactin deﬁciency is the inability to breastfeed. Recombinant human prolactin for the treatment of lactation insufﬁciency is in development.

Patients with diabetes insipidus can be treated with desmopressin—a two–amino acid modiﬁcation of vasopressin that has potent antidiuretic but no vasopressor activity. The goals of therapy are to reduce nocturia to provide adequate sleep and to control excess urination during the day. Desmopressi can be administered as a nose spray or an oral tablet.