Ureteral strictures cause narrowing of the ureteral lumen, and they can reﬂect either ischemic or nonischemic damage to the mucosa with subsequent ﬁbrosis. Ischemic strictures are caused by a devascularization of the periadventitial blood supply, which may occur after surgical mobilization of the ureter, renal transplantation, or radiation therapy. Nonischemic strictures may be caused by ureteral instrumentation, infection (e.g., pyelonephritis, tuberculosis, schistosomiasis), inﬂammatory periureteral disease, or malignancy. 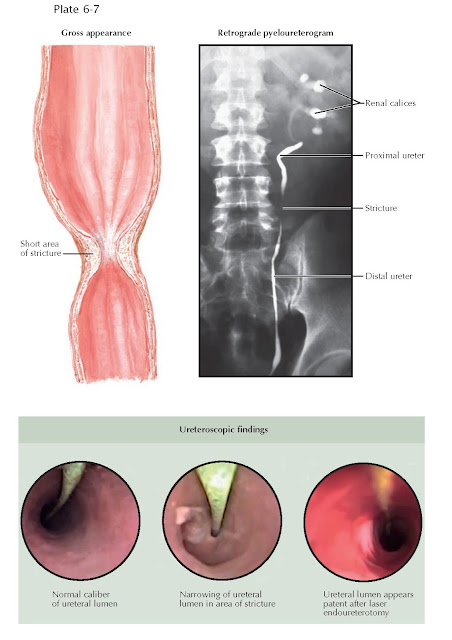 Patients with acute ureteral obstructions of any kind typically have ﬂank pain, which may be accompanied by nausea and vomiting. Chronic obstructions are often asymptomatic, although some may cause urosepsis or, if bilateral, renal insufﬁciency.

The gold-standard imaging study for evaluation of the ureter is contrast-enhanced CT. If any chronic ureteral obstruction is present, the more proximal segments will appear dilated. If a stricture is present, progressive narrowing of the ureter may be seen on delayed urographic phase, with little or no contrast seen in the distal segment if the narrowing is severe. If, in contrast, a stone is present, it will be visible as a discrete, hyperattenuating region in the ureter. If a ureteral mass is present, a ﬁlling defect may be seen.

Once a stricture has been diagnosed, a renal scan can be performed to quantify the function of each kidney. Such measurements are especially important if endoscopic treatment is being considered because the ipsilateral kidney should have at least 25% of normal ﬁltration function for the intervention to have a high probability of success.

Once a ureteral stricture has been diagnosed, the possible ongoing presence of secondary causes (especially malignancy) should be ruled out. The stricture should then be treated to relieve the pain of obstruction and prevent upper tract infection.

Endoscopic techniques, which are associated with less morbidity and faster recovery times than open procedures, should be employed for strictures that are 1 cm or less in length, located away from the midureter, present for less than 6 months, nonischemic in etiology, and associated with at least 25% remaining function in the ipsilateral kidney. Strictures that do not possess these characteristics should be treated using an open or laparoscopic surgical approach.

Endoscopic Treatment. A ureteral stent can be deployed as a temporizing measure in patients with pain or urosepsis. In the occasional patient with signiﬁcant comorbidities who is a poor candidate for more invasive procedures, a stent may be used as deﬁnitive management, although it should be changed every 3 to 12 months. Occasionally, if a very tight obstruction is seen, two side-by-side stents may be necessary to provide adequate drainage.

An endoureterotomy consists of stricture incision under direct vision through a ureteroscope. Several different technologies can be employed, including cold knife incision, electrocautery, and holmium laser ablation. All require a full-thickness cut through the wall of the ureter into the periureteral fat. The optimal direction of the incision depends on the level of the ureter that is affected. Incisions into the pelvic ureter should be made in an anteromedial direction, so as to avoid the iliac vessels. Meanwhile, incisions into the upper ureter should be made in a posterolateral direction, so as to avoid the aorta and inferior vena cava.

Surgical Treatment. Open or laparoscopic excision of a ureteral stricture should begin with careful ureteral mobilization to minimize the risk of damage to the periureteral blood supply. Debridement of the scarred and ﬁbrotic area should then proceed until a bleeding edge is reached. Finally, the ureter should be reconstructed in a manner that is tension-free, spatulated, and water-tight. A ureteral stent should be placed to ensure adequate postoperative drainage. The optimal method of reconstruction depends on the location and length of the excised segment. Several different options are available, as described in Plate 10-36.