Obstruction of the ureteropelvic junction (UPJ), located where the renal pelvis meets the proximal ureter, typically reﬂects congenital abnormalities of either the ureter or surrounding structures. These are often detected during routine ultrasound examination of a growing fetus. The incidence of congenital UPJ obstruction is approximately 1:1000, with a slight male and left-sided predominance. In 10% to 40% of cases, the obstruction is bilateral. 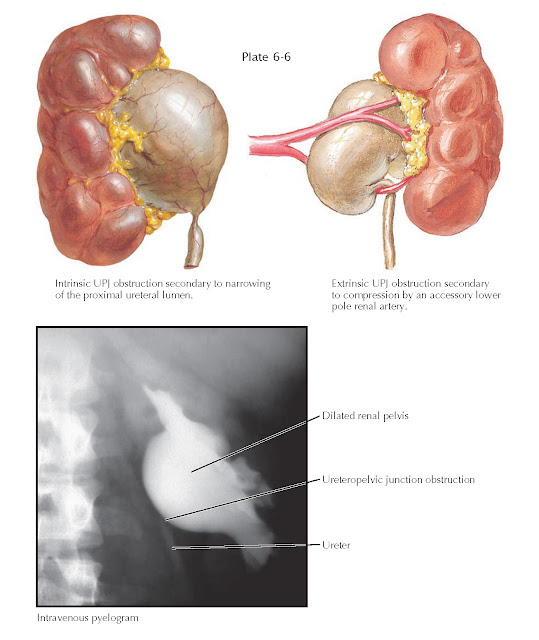 There are multiple possible causes of congenital UPJ obstruction, which include:

·   Ureteral kinking that results from persistence of ureteral folds, which normally disappear during development

·   Insertion of the ureter superior to the most dependent portion of the renal pelvis, thereby limiting drainage

·    Direct compression by accessory vessels crossing from the renal artery or aorta to the lower pole of the kidney (i.e., extrinsic obstruction)

Acquired UPJ obstruction, in contrast, may occur during childhood or adulthood, typically in the setting of stones, chronic inﬂammation with stricture formation, polyps, malignancy, or surgical insult.

In fetuses and neonates, the diagnosis is usually ﬁrst suspected when unilateral or bilateral intraparenchymal hydronephrosis accompanies normal ureteral width. In some circumstances, it may be difﬁcult to distinguish the dilated calices seen in hydronephrosis from the large intraparenchymal cysts seen in multicystic dysplastic kidney (MCDK). Radiographic continuity between the dilated regions suggests hydronephrosis, while dilated regions that are distinctly separate favors MCDK. Nuclear scanning may help further differentiate the two conditions because radiotracer will concentrate in the hydronephrotic kidney, which retains some function, but not in the MCDK, which lacks function. In cases of bilateral hydronephrosis, high grade unilateral hydronephrosis, or congenital abnormalities such as horseshoe kidney, voiding cystourethrogram may be indicated to assess for vesicoureteral reﬂux (see Plate 2-21) and other causes of congenital hydronephrosis.

In older children and adults, undiagnosed congenital or acquired UPJ obstructions may cause intermittent, severe ﬂank pain following increased ﬂuid or diuretic intake. In addition, patients may experience hematuria after mild trauma, the theory being that distention of the renal pelvis causes mucosal vessels to become more friable. The diagnosis of UPJ obstruction in this population is often ﬁrst suggested on contrast enhanced CT or ultrasound. In adults and children older than 3 months of age, diuretic renography using 99mTc-MAG3 nuclear tracer should be performed once negative urine cultures have been obtained because it permits precise measurement of renal drainage. If a crossing vessel is suspected, duplex ultrasonography, CT angiography, or magnetic resonance angiography may help guide further management.

Surgical intervention for UPJ obstruction is indicated for increased hydronephrosis on ultrasound (initially performed every 1 to 3 months), symptoms, stones, infection, deterioration of renal function, or hypertension. Techniques for intervention are primarily minimally invasive, and common ones are described in detail in Plate 10-16. A subset of neonates with suspected UPJ obstruction have spontaneous resolution, and efforts to prospectively identify these patients are ongoing.