Many species of the bacterial genus Actinomyces are able to cause disease in humans. The infection tends to run a chronic course that leads to suppurative granulomatous abscesses in the skin. The diagnosis may be suspected if there is clinical evidence of painful draining of suppurative material and histological evidence of granuloma formation. The exact diagnosis is based on tissue culture or culture of the suppurative material. The disease is progressive if appropriate therapy is not instituted. The organisms responsible for these infections are normally found within the oral cavity and are commensal organisms. They can also be found through-out the gastrointestinal tract.

Clinical Findings: Males are much more likely to develop this infection than females, with an estimated ratio of 3 : 1. Most patients are between 30 and 50 years of age. Predisposing factors include poor dental hygiene. The infection is believed to be endogenous in origin. It is a rare infection in the United States. There are several clinical pictures of actinomycosis. The most common form seen is the cervicofacial subtype, which accounts for more than 50% of cases. It is related to oral trauma, such as recent dental work. The area that has been traumatized provides a portal of entry for the bacteria, and there is a progressive induration of the underlying tissue. With time, the firm swelling begins to break through the skin and to drain through multiple cutaneous fistulas. Pain can be intense and is relieved as the fistulas spontaneously drain. The designation “lumpy jaw” signifies the induration and fistula formation seen in patients with actinomycosis cervicofacial disease.

The next most prevalent form of the disease is the pulmonary form. This is believed to be caused by aspiration of the causative bacteria. Patients often complain of hemoptysis and low-grade fever. Chest radiographs can show features similar to those of tuberculosis infections. Any lobe of the lung may be involved, but the right lower lobe is most frequently affected because the infection is caused by aspiration. If the disease goes unrecognized, sinus tracts eventually form through the lung lining, muscle, and skin to the thoracic cutaneous wall. Skin abscess and a draining sinus in this location should lead one to look for pulmonary involvement, including the development of empyema. Abdominal forms of the disease are believed to occur after trauma to the bowel. This has been reported most frequently after appendectomy, and for unknown reasons the bacteria localize to that area. The last form of the disease is the disseminated form, which is rare and can occur after any form of the disease that is not appropriately treated. Any organ system may be involved. 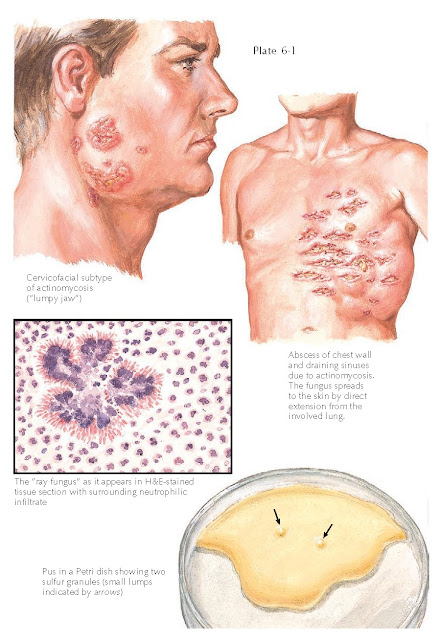 Anaerobic culture of the purulent material or a portion of the tissue is critical for proper identification of the responsible organism and ultimately for choosing the appropriate therapy. Material should be sent anaerobically immediately to the laboratory. Yellow to white sulfur granules form as the culture material grows. Evaluation of the sulfur granules with the use of an oil immersion microscope shows the filamentous bacteria. Pathogenesis: Actinomycosis is caused by one of the gram-positive filamentous bacteria of the Actinomyces genus: A. israelii, A. turicensis, A. lingnae, A. gravenitzii,

A. meyeri, A. naeslundii, A. radingae, A. europaeus, A. viscosus, A. neuii, or A. odontolyticus. A. israelii is the organism most frequently observed to cause disease. These are anaerobic, acid-fast bacteria that have a filamentous morphology with varying amounts of branching. The definitive diagnosis is made by culture of the organism.

Treatment: The drug of choice to treat this bacterial infection is penicillin. Therapy needs to be maintained for months to be certain of complete cure. If the infection is treated promptly, almost all patients have a full and complete recovery. Patients who are allergic to penicillin can be treated with any of the tetracycline-based antibiotics.