Blastomycosis is a fungal infection that is found pre- dominantly in North America. This disease is also known as North American blastomycosis or Gilchrist’s disease. However, because it has also been reported in Central and South America, the preferred name of this disease is blastomycosis. It is endemic in the areas of the United States and Canada that border the Great Lakes, the Saint Lawrence Riverway, and the Mississippi River Valley. Most cases have been reported from Wisconsin and Ontario. The infection is common in other mammals such as dogs. Most cases are isolated and sporadic in nature; however, outbreaks of the infection have occurred in which many people who came into contact with the same environmental source were infected.

Clinical Findings: The organism is first inhaled into the lungs, where it quickly reverts to its yeast state. Most infections are controlled by the local immune response, and minimal to no symptoms occur. The disease most frequently stays localized within the pulmonary system. It can, however, spread to any other organ system in an immunosuppressed host. After the conidia (spores) are inhaled, the most frequent symptoms are coughing, fever, pleurisy, weight loss, malaise, arthralgias, and hemoptysis. The symptoms may initially mimic those of an influenza infection. Approximately half of the patients with symptomatic disease have only pulmonary findings; the other half have both pulmonary and other organ system findings.

Cutaneous findings are nonspecific and have been classified as verrucous or ulcerative. The verrucous lesions can range from small papules and plaques to large nodules with sinus tract formation. The central face and nose are common locations of involvement. Ulcerated lesions can occur anywhere and are associated with underlying abscess formation and drainage. The skin lesions can mimic those of skin cancers, and biopsy is required to make the appropriate diagnosis. 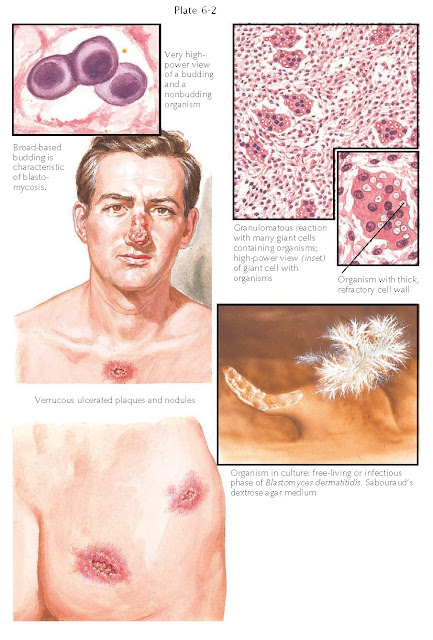 Histology: Biopsies of blastomycosis show pseudoepitheliomatous hyperplasia of the epidermis. Within the dermis is a granulomatous infiltrate of predominantly noncaseating granulomas. Neutrophils are prominent. The yeast can be appreciated on routine hematoxylin and eosin staining. They appear as oval cells with a thick, refractory wall. Often, broad-based budding is noted. This form of solitary broad-based budding is specific for Blastomyces dermatitidis. Other special stains can be used to better highlight the fungus, including the periodic acid–Schiff and silver stains.

The best means of diagnosing this fungal infection is by culture on Sabouraud’s media. The mold begins to grow quickly and forms white to gray, waxy colonies. Special DNA probes can be used to quickly identify the fungus growing in the medium.

Pathogenesis: Blastomycosis is directly caused by infection with the dimorphic fungus, B. dermatitidis. This organism inhabits soil and vegetation in its mold or mycelial form. When the environment that contains the fungus is disrupted, the spores of this fungus may gain entry into a human (or other mammal) by direct inoculation or by inhalation. Once the fungus has entered the human body, the increase in temperature causes it to convert to its yeast form. The yeast form is not contagious, and the human acts as a host for reproduction but is unable to transmit the disease to any other human. The normal host is able to contain the inhaled spores within alveolar macrophages and granulomas in the lung, but the yeast form of the fungus is much more resistant to killing by natural host responses. If the host is immunocompromised, the fungus may disseminate to other organs, particularly the cutaneous surface. Dissemination occurs via vascular spread of the yeast organisms.

Treatment: Prompt treatment with amphotericin B is the therapy of choice for those with disseminated or severe disease or any evidence of immunosuppression. Milder cases can be treated with prolonged courses of the azole antifungal agents; amphotericin B is used if the disease fails to respond to this treatment. Fluconazole and itraconazole are the two antifungal agents most frequently used, although other options are available. Before antifungal therapy was available, more than 80% of cases were fatal.