Chancroid is a sexually transmitted disease caused by Haemophilus ducreyi. Infection with this bacterium is one of the most common causes of acute genital ulcerations in the world. Although it is most frequently encountered in Africa and Asia, it can be seen worldwide. Infection with this agent is frequently associated with other sexually transmitted diseases. H. ducreyi infection has been shown to increase the likelihood of contracting the human immunodeficiency virus (HIV) after exposure. Although specialized serology testing is being developed, the diagnosis is based on the clinical scenario and culture results.

Clinical Findings: H. ducreyi is transmitted via sexual contact, and the first sign of the disease is the formation of a papule at the site of inoculation. The papule occurs, on average, 3 to 5 days after exposure. The papule, which is often surrounded by a red halo, quickly turns into a vesiculopustule and then a painful ulceration. The ulcer is nonindurated and has undermined edges with a well-demarcated boundary. If left untreated, the ulcerations can become enormous and serpentine in appearance. The base of the ulcer has a gray appearance with granulation tissue present. The infection is associated with massive inguinal adenitis, termed buboes, in about 50% of cases. The disease is transmitted by unprotected sexual intercourse with an infected individual. Women may develop subclinical undetected disease, in which case they can act as carriers for transmission. This is likely the reason that sexual intercourse with female prostitutes increases one’s chance of developing disease. Active disease is much more frequently encountered in males, in a 4 : 1 ratio. 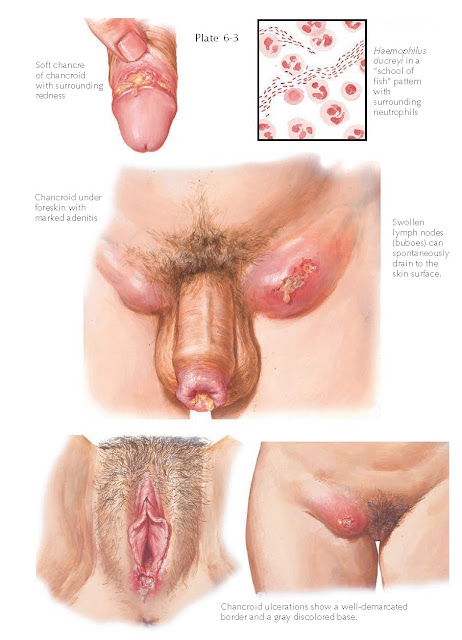 Pathogenesis: H. ducreyi is a gram-negative coccobacillus. The organism is transmitted from one human host to another by intimate physical contact. The bacterium requires a break in the integrity of the epidermis to gain entrance to the body. It then multiples locally and forms the initial papule, which soon becomes a pustule teeming with bacteria. Once the papulopustule ulcerates, the bacterial load is high and allows for further transmission. It has been shown that the bacteria can be shed from nonulcerated lesions. The formation of ulcerations on epidermis that opposes the original ulcer has been termed a “kissing ulcer” and is caused by direct autoinoculation of the bacteria. The bacteria cannot live long outside its human host, and this characteristic can make it difficult to properly culture. Many virulence factors have been detected, including the cell surface lipooligosaccharide protein. The bacteria grow on chocolate agar culture medium.

Histology: A skin biopsy from the edge of the ulcer may be helpful in diagnosis. There are three zones of inflammation from superficial to deep. Zone 1 is the necrotic superficial tissue. The second zone is the largest and consists of a proliferation of freshly made blood vessels. The last zone is a deep layer consisting of an inflammatory infiltrate with many plasma cells. Detection of the bacteria is difficult on tissue biopsies unless the bacterial load is tremendous. If a high burden of bacteria is present, they may be seen on microscopy lined up in a “school of fish” pattern. This is rarely observed in skin biopsy specimens. Culturing of the bacteria is the best means to firmly make the diagnosis.

Treatment: Treatment can be accomplished with azithromycin, erythromycin, or ceftriaxone. The clinician should also consider treating empirically for other sexually transmitted diseases, because they tend to congregate together. This is especially true of gonorrhea, which is often a coinfection with H. ducreyi. For some reason, the disease is more difficult to treat in patients who have a coexisting HIV infection. This may be because HIV-positive patients have a lowered cell mediated immunity, and an intact cell-mediated immune system is needed to treat H. ducreyi infection. Surgical incision and drainage of fluctuant nodules should be considered as an adjunct to oral antibiotics. Drainage decreases the bacterial load a d potentially makes antibiotic therapy more effective.