Coccidioidomycosis, or valley fever, is endemic in the southwestern United States. Patients who breathe in spores (arthroconidia) from the fungus Coccidioides immitis may become infected. Most patients do not develop active disease; instead, their exposure is confirmed by the presence of a positive delayed hyper-sensitivity test to the fungus. Primary cutaneous coccidioidomycosis is a rare entity caused by inoculation of the fungus directly into the skin. By far the most common form of cutaneous coccidioidomycosis is caused by dissemination to the skin from a primary pulmonary infection.

Clinical Findings: This infection has a slightly increased incidence in African Americans. The Filipino population appears to be at greatest risk for developing severe disease. Males and females are equally affected. Most individuals who inhale the spores do not develop active disease. Rather, the fungus lies dormant or trapped within pulmonary granulomas. About one third of patients who are exposed to the fungus develop an acute pneumonitis. Fever, cough, malaise, and pleurisy are the main symptoms. The pneumonitis may be severe enough to bring the patient to the clinic to seek therapy, but many cases are mild and patients routinely dismiss them as the common cold. Reactivation later in life may occur secondary to acquired immunosuppression, pregnancy, or older age.

Cutaneous findings in coccidioidomycosis have a variable morphology. Papules, plaques, and nodules are the most frequent forms of disseminated coccidioidomycosis. These skin lesions have a predilection to affect the face, and in particular the nasolabial skin fold. Multiple draining cutaneous abscesses with fistula and sinus formation can occur in late untreated disease. Chronic ulcerations have also been reported to be a manifestation of cutaneous disease.

Nonspecific skin findings attributed to fungal infection with C. immitis are well recognized. The best reported and most clearly associated finding is erythema nodosum. Erythema nodosum is a reaction that occurs in many internal and cutaneous disease states. Almost any deep fungal infection can induce erythema nodosum. Patients who have a history of travel to an endemic area should be screened for this fungal disease. Rarely, erythema multiforme and Sweet’s syndrome have been reported in association with coccidioidomycosis.

Pulmonary disease is almost always present and should be thoroughly searched for in patients presenting with cutaneous coccidioidomycosis. Chest radiographs may show many findings, including cavitary lesions, hilar adenopathy, pneumonitis, pleural effusions, and lobar disease.

The only method to make a diagnosis is with an appropriate tissue culture that shows growth of the causative fungus. The clinical examination and history are not as sensitive or specific as culture of the fungus. If one has a high index of suspicion for this disease, treatment should be instituted and then adjusted after the culture results become available. 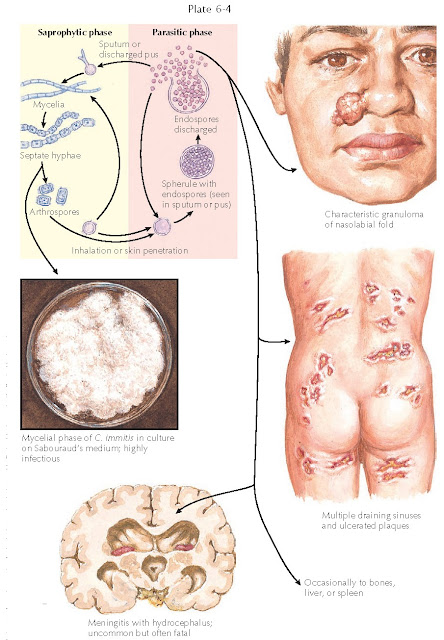 Pathogenesis: Coccidioidomycosis is caused by the soil-dwelling fungus, C. immitis. Endemic to the south-western United States, Central America, and parts of South America, this fungus is found in the environment in its mycelial or mold phase. It produces white, light, and fluffy arthrospores. These arthrospores are highly infectious. Once inhaled, this dimorphic fungus turns into its yeast form. The yeast form is made of thick-walled spherules with multiple, centrally located endospores that can be released from the host by coughing or by drainage of an abscess. The resulting endospore readily converts back to its mycelial phase and can infect another host.

Treatment: The azole antifungals fluconazole and itraconazole are first-line therapies for coccidioidomycosis. Treatment typically lasts 6 to 12 months; prolonged therapy may be required in some cases. Severe, life-threatening cases and those refractory to azole anti-fungal medications are usually treated with amphotericin B. Adjunctive surgical treatment can be used to debride abscesses and remove isolated pulmonary disease.