Cryptococcosis is an opportunistic fungal infection caused by Cryptococcus neoformans or, less frequently, by Cryptococcus gattii. It is seen primarily in immunosuppressed patients such as patients taking chronic immunosuppressive medications and those with the acquired immunodeficiency syndrome (AIDS). A diagnosis of cryptococcosis in a patient with human immunodeficiency virus (HIV) infection is considered to be an AIDS-defining illness.

It is primarily a lung disease, but dissemination to the skin and to the central nervous system (CNS) are well described. Cryptococcosis has a higher tendency to affect the CNS than the other opportunistic fungi do. Primary cutaneous cryptococcosis is a rarely seen condition that is caused by direct inoculation of the yeast into the skin. 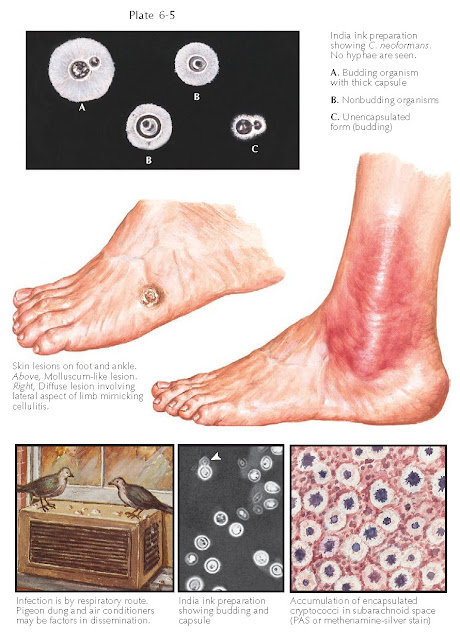 Clinical Findings: A variety of infectious outcomes can occur after exposure to this encapsulated yeast. Immunocompetent hosts typically do not show any signs or symptoms. On occasion, the fungus can be found colonizing the oropharynx and upper airway; this has been shown to be transient and appears to cause no harm. Most of the population in North America show serological evidence of exposure. If a colonized patient subsequently becomes immunosuppressed, the dormant fungus may cause disease. Cryptococcosis is ubiquitous in North America, and patients routinely come in contact with the fungus. Immunosuppressed patients who contact the fungus during routine outdoor environmental exposure may become infected. The fungus can be found in soil and is frequently found in bird droppings, especially those of pigeons. The fungus gains entry via inhalation. Once in the lung tissue, it is able to grow and reproduce. The host may develop signs of lung inflammation including cough, hemoptysis, pain, pleurisy, and pneumonia. The fungus eventually disseminates through the bloodstream to infect various tissues.

The skin is affected in up to 25% of patients with disseminated disease, especially those patients with AIDS. The lesions can appear as small white papules with a central dell that mimic molluscum contagiosum. The most commonly described morphology of cutaneous cryptococcosis is that of a red macule that can be large and can imitate cellulitis. Many other cutaneous morphologies have been described in the literature. Cutaneous nodules with underlying abscess formation and overlying ulcerations are not uncommon. Clinical suspicion should lead the physician to perform an incisional or punch biopsy for histological evaluation and microbiological culture to ascertain the diagnosis.

Pathogenesis: C. neoformans and C. gattii are opportunistic yeasts that are encapsulated. The capsule is critical in that it helps the fungus avoid host defenses. Various serotypes of the species exist. The host inhales the organism or accidentally becomes inoculated through a penetrating skin wound. The yeast can over- come the host’s cell-mediated immunity if the immune system is compromised. This can lead to fungal abscess and hematogenous spread of the fungus. Cryptococcus is a unique fungus that has a neurotrophic behavior and often causes CNS disease.

Histology: The histological features are somewhat dependent on the immune status of the patient. In severely immunosuppressed patients, the biopsy specimen often shows a gelatinous appearance with numerous yeast cells and a mixed inflammatory infiltrate.

Immunocompetent patients are more likely to have a granulomatous infiltrate with few yeast organisms and a vigorous host granulomatous response. The yeast capsule can be stained with Alcian blue, India ink, or mucicarmine. Periodic acid–Schiff stain can be used to demarcate the central portion of the yeast.

Cultures of the fungus reveal fast-growing, off-white, mucoid colonies. The fungus is unique in that it can grow at varying temperatures, including the routine culture temperature of 24°C to 25°C and body temperature of 37°C. Microscopic examination reveals round, budding, encapsulated yeasts without hyphae.

C. neoformans has unique biochemical features, such as its inability to ferment sugars, that allow mycologists to study and differentiate this organism from other fungi and from other cryptococcal species.

Treatment: Patients with a diagnosis of cutaneous cryptococcosis need to be evaluated for CNS involvement, because the therapy is very different. If a spinal fluid analysis shows evidence of fungal involvement, the treatment of choice is amphotericin B with or without flucytosine. If no nervous system involvement is present, long-term use of itraconazole or fluconazole can be prescribed. Cutaneous abscesses should be incised and drained to decrease the fungal load. Treatment considerations should also include the immune status of the patient and appropriate screening and testing for HIV infection.