Cutaneous larva migrans is a tropically acquired skin disease caused by the aimless wandering of a nematode larva. This disease has also been termed “creeping eruption” because of the slow, methodical movement underneath the skin, which subsequently manifests with the classic cutaneous findings. The most frequent cause of cutaneous larva migrans is the larva of Ancylostoma braziliense or Ancylostoma caninum. The cutaneous findings are similar among the various species that can cause disease.  Treatments are effective for this condition, which causes more psychological than physical harm. Establishment of the specific larva responsible for the disease is not routinely attempted, nor is it practical or cost effective. 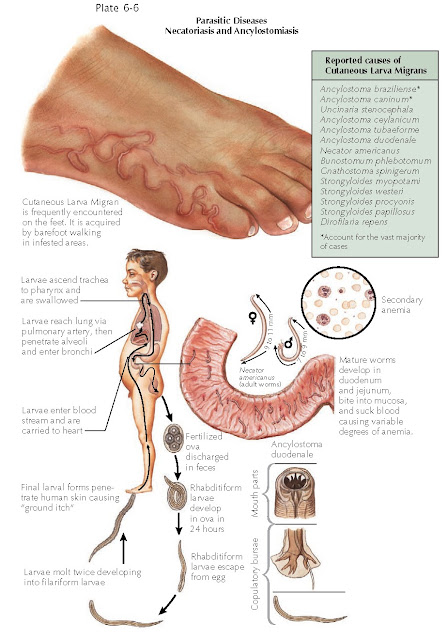 Clinical Findings: The larvae gain entrance into the epidermis through tiny abrasions, cuts, or any disruption of the normal epidermal layer. The larvae are frequently obtained during a barefoot walk on a contaminated beach or from a similar environment. Travelers to Central and South America often acquire the larvae on the beach while lying on or playing in the sand. The initial entry of the larvae goes entirely unnoticed. It is not until days to weeks later that the human host begins to develop cutaneous signs of the disease. The first evidence is a pink to red, edematous eruption that begins to take on a serpiginous course. The involved skin appears as red, squiggly lines. If only one larva is present, only one serpiginous line will be present. The line meanders and slowly elongates over days to weeks until the patient seeks medical advice. Patients who are infected with multiple parasites have multiple serpiginous areas of involvement, with some in a criss-crossing pattern. Pruritus is universal, but pain is infrequent. The lesions are typically elevated but can become vesicular in nature.

Pathogenesis: Cutaneous larva migrans is caused by penetration of the epidermis by one of the various larvae known to cause disease. The larvae are derived from eggs that are laid in the intestines of an infected animal, such as a dog, and then released in the stool. When the animal defecates, the eggs are readily passed into the soil, where they hatch into larvae. The human is an incidental or dead-end host, because the larva is unable to replicate or complete its life cycle in humans. This is very much different than infections with the gastro- intestinal parasites Ancylostoma duodenale and Necator americanus, which require the human host to replicate. The larvae wander around the epidermis, unable to penetrate the basement membrane zone and therefore unable to enter the dermis. If the condition is left untreated, the larvae die in the skin within a few months. The larvae have been shown to secrete enzymes that help them travel throughout the epidermis, but they lack an enzyme to penetrate the dermal-epidermal junction.

Histology: The histopathology is nonspecific unless the actual larva is biopsied. This is highly unlikely, because the larva is typically an estimated 2 to 3 cm ahead of the leading edge of the serpiginous rash, and most biopsies are taken from the serpiginous region. The biopsy specimen shows a lymphocytic dermal infiltrate with eosinophils. Occasionally, a space is seen within the spongiotic epidermis, which indicates the area through which the larva passed.

Treatment: The mainstays of treatment are the anthelmintic agents. Albendazole and ivermectin are the most frequently used medications. Oral ivermectin is well tolerated and works equally as well as the others. Ivermectin binds to glutamate-gated chloride channels in the parasites, allowing free passage of chloride and eventually death of the cell. Thiabendazole and albendazole work by inhibiting microtubule polymerization in the parasite, ultimately leading to its death. Thiabendazole and albendazole can cause severe gastrointestinal side effects, and they are best used topically. A pharmacist can compound these agents into a topical solution to apply to the affected area. Other therapies that have been attempted include cold therapy with topical liquid nitrogen, which is no longer advocated. The larvae have been shown to survive at subfreezing temperatures, and because one cannot predict with high certainty the location of the larva, a large area of skin must be treated with liquid nitrogen for the treatment to be effective.