Beryllium (Be) is a metal whose strength, light weight, and other properties make it particularly well suited for aerospace, defense, nuclear, electronic, and other fore-front technology applications. Lung diseases caused by beryllium were ﬁrst publicized in the early 1940s among beryllium-oxide extraction workers in Ohio and ﬂuorescent lamp manufacturing workers in Massachusetts. Both acute chemical pneumonitis and chronic beryllium disease (CBD) resembling sarcoidosis (“Salem sarcoid” in lamp workers) were observed. Industrial hygiene measures limited the high exposures that caused acute pneumonitis, but the continuing effects of very low-dose exposure after sensitization were more difﬁcult to control. Beryllium is mined in the United States, China, Kazakhstan, Russia, and other countries. The ore is processed on site to beryllium hydroxide and then converted into beryllium metal, oxide, and alloys. Beryllium salts and metal can sensitize susceptible individuals to cause a chronic granulomatous lung disease berylliosis that closely resembles sarcoidosis. The disease occurs almost exclusively among workers involved in beryllium extraction and production of beryllium alloy products. Sensitizing exposure does not occur after the metal has been integrated into ﬁnished products. Beryllium lung disease may serve as a paradigm for diseases in which the mechanism involves the combination of a genetically determined immunologically susceptible population with exposure to a unique speciﬁc antigen. 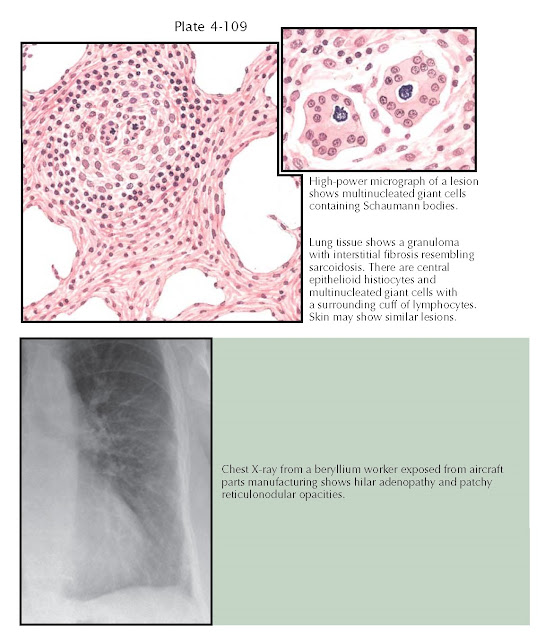 CBD, or berylliosis, usually begins with the gradual onset of shortness of breath and dry cough. As the disease worsens, systemic symptoms of easy fatigue, weakness, anorexia, and weight loss may be seen. Severe pulmonary involvement can produce dyspnea at rest, hypoxemia, and cor pulmonale with edema. The radiographic features resemble sarcoidosis with small reticulonodular opacities in a diffuse or patchy distribution and obscuration of peripheral vasculature by adjacent ground-glass opacities; bullae, lung distortion, or pleural thickening are uncommon. Symmetric bilateral hilar lymph node enlargement is usually moderate rather than massive and is found in fewer than 50% of cases. Progressive coalescence of opacities in an upper or mid-lung distribution can be seen as the disease advances. Pulmonary function tests show a restrictive impairment, diminished gas transfer (DLCO [diffusing capacity for carbon monoxide]), and hypoxemia at rest that often worsens on exertion; a high proportion of patients with CBD also evidence airﬂow obstruction.

The pathology of CBD shows epithelioid cell non-necrotizing granulomas in the lung parenchyma, the hilar and mediastinal lymph nodes, and less commonly in the skin and other organs. The lesions show macrophage-derived multinucleated epithelioid giant cells surrounded by smaller macrophage or monocytes and both T and B lymphocytes. Schaumann bodies are common. Fibroblasts and collagen inﬁltrate the centers of the granulomas as the disease progresses. Beryllium usually cannot be detected within these lesions. Other organ systems beyond the thorax can be involved in CBD, such as the skin, liver, spleen, peripheral lymph nodes, and bone marrow. Clinicians and pathologists agree that sarcoidosis and CBD cannot be distinguished reliably for individual cases.

The pathogenesis of CBD is driven by the accumulation of beryllium-speciﬁc CD4 Th1-cells at disease sites. Genetic factors appear to determine the efﬁcacy of presentation of beryllium to T cells, the T-cell response, and the cytokine production that inﬂuences the subsequent immune inﬂammatory response. Lung and peripheral blood CD4 T lymphocytes from sensitized individuals respond to beryllium in vitro by proliferating vigorously (i.e., the beryllium lymphocyte proliferation test). Sensitization alone is not sufﬁcient to produce clinically evident lung disease because many exposed workers develop sensitization without progression to disease. Lymphocyte immune sensitivity to beryllium is found in 1% to 16% of exposed workers, but only half of the sensitized workers evidence lung granulomas.

The diagnosis of CBD requires a compatible clinical picture, an appropriate environmental exposure history, and the demonstration of cell-mediated immunity (lymphocyte sensitivity in vitro) to beryllium antigen. Clinical evidence of disease with noncaseating granulomas in tissue pathology is essential because not all exposed or sensitized workers develop disease. A clinical syndrome alone is not sufﬁcient because sarcoidosis can present identical features and is much more common. Workers suspected of CBD can be referred to one of several national research centers that offer consultation and specialized testing.

The therapy for berylliosis is similar to the treatment for sarcoidosis but must include strict avoidance of beryllium exposure. Patients with very mild or early disease may require no treatment if avoidance of further antigen exposure is successful. Most patients can be managed with relatively low doses of oral corticosteroids. Higher doses of steroids and cytotoxic or steroid-sparing alternatives (methotrexate, azathioprine, cyclophosphamide) are equired by more patients with more severe disease.