Asbestos causes diffuse pulmonary ﬁbrosis (asbestosis), areas of pleural thickening that may calcify (plaques), and benign exudative pleural effusions. Asbestos exposure is associated with increased risk for bronchogenic carcinoma in tobacco smokers and for malignant pleural and peritoneal mesothelioma. The asbestos-related diseases are caused almost exclusively by occupational exposures, but asbestos also represents a signiﬁcant risk for mesothelioma for the general population and for workers who contact the material through their jobs.

Asbestos is valuable for its great durability and its thermal insulating properties. Asbestos is an abundant crystalline magnesium silicate that occurs in pure natural deposits as a densely packed ﬁber. The natural ﬁber can be crafted into sheets of insulating material, mixed as insulation slurry for spraying or direct application on to walls or pipes, mixed with concrete cement to strengthen it, woven into cloth with great ﬁreresistant properties, or manufactured into many other products in which durability and resistance to friction are important. After a period of wide use in diverse applications throughout the world during the middle of the twentieth century, the use of asbestos has been largely eliminated in the industrialized nations because of the health hazards from exposure; however, it is still mined, milled, and used widely in many developing countries. 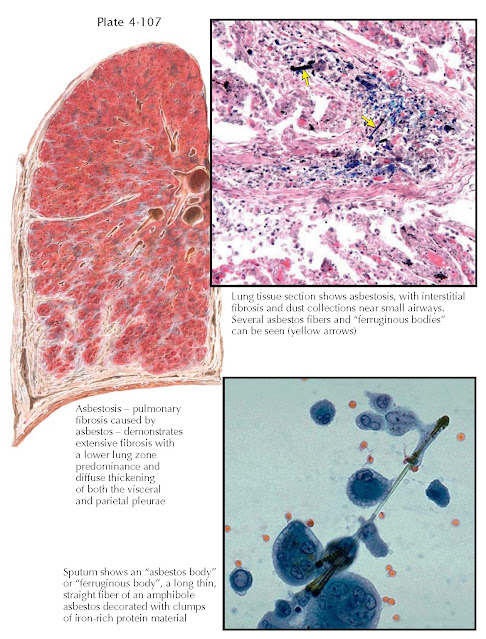 The crystal structure of asbestos is in the form of long, thin ﬁbers. Asbestos is divided into two mineral groups: the serpentine and the amphibole. Chrysotile (serpentine) asbestos is a very long, white, curly ﬁber that was used extensively for insulation and cloth. The amphibole asbestos types amosite (brown asbestos) and crocidolite (blue asbestos) have shorter, straight ﬁbers and are particularly valued for their durability.

Exposure to asbestos occurs primarily through breathing airborne ﬁbers into the lungs, and inhaled asbestos is clearly harmful if the dose is sufﬁcient. Workers in all phases of asbestos production and installation experienced very high levels of exposure until the 1960s or 1970s because the health hazards were not recognized or were not publicized. Measures to control airborne ﬁber levels and then to reduce or eliminate the use of asbestos were implemented during the 1970s and 1980s. Levels of asbestos exposure sufﬁcient to cause all types of asbestos-related diseases were experienced by asbestos miners and millers and by workers manufacturing asbestos cement, insulation products, paper, brake pads, friction products, and similar materials. Commercial ship builders constructing new or renovated vessels during and after World War II experienced very high levels of asbestos exposure. Insulation workers, steam boiler makers, plumbers, and others in the construction trades were exposed to asbestos as they applied the material to walls, ceilings, pipes, and many other surfaces that needed heat protection. Installed asbestos can still represent a health hazard to workers who are employed in these buildings or who maintain, renovate, or demolish them. All of the diseases caused by asbestos have very long delay periods (latency, lag time) between the exposure and the clinical illness, and no acute or short-term toxic effects of asbestos are known.

High levels of exposure to asbestos cause diffuse pulmonary ﬁbrosis known as asbestosis. The clinical, radiographic, and pathologic features of asbestosis are nearly identical to those of idiopathic pulmonary ﬁbrosis (IPF; cryptogenic ﬁbrosing alveolitis). The symptoms are slowly progressive shortness of breath on exertion and a dry cough. Physical ﬁndings include high-pitched end-inspiratory crackles (dry rales) at the lung bases and digital clubbing in about half of the patients. Pulmonary function tests show a restrictive physiology with hypoxemia that worsens on exertion. The ﬁndings on chest radiograph are small irregular opacities at the periphery of the lung with a lower lung zone pre- dominance. High-resolution computed tomography (HRCT) scans show thickening of subpleural septal and interlobular lines, curvilinear lines, and nonseptal linear opacities. Honeycomb cystic changes and traction bronchiectasis become apparent with more advanced disease.

The lung pathology of asbestosis is similar or identical to that of IPF and features the changes characterized as “usual interstitial pneumonitis,” but the key distinguishing feature is the presence of abundant asbestos ﬁbers or asbestos bodies. If the ﬁbers are amphibole asbestos, many may become coated with protein and iron to become “asbestos bodies” or “ferruginous bodies,” golden-red refractile ﬁbers with beads or cylinders of protein. If the ﬁbers are chrysotile, then few if any asbestos bodies form. The asbestos bodies can be stained blue with iron stains and are visible by light microscopy; smaller or uncoated ﬁbers can be found by transmission electron microscopy.

Asbestosis (pulmonary ﬁbrosis caused by asbestos) develops only after very high levels of exposure and only appears decades (10-50 years) after exposure began and often after the exposure ended. Thus, workers with abnormal chest radiographs who have had only recent or brief exposure to asbestos are very unlikely to have asbestosis. The diagnosis of asbestosis rests on an appropriate asbestos exposure history, a suitable time interval between exposure and disease, basilar crackles on chest examination, and compatible radiographic changes. Lung tissue biopsy is usually not needed unless the exposure history is uncertain. There is no treatment for asbestosis other than supportive care. The prevalence of pulmonary ﬁbrosis caused by asbestos has increased progressively but may have peaked in developed countries where asbestos use has been curtailed or banned for 25 years. It is expected that current exposure levels in the industrialized countries will be far below the threshold needed to cause pulmonary ﬁbrosis. 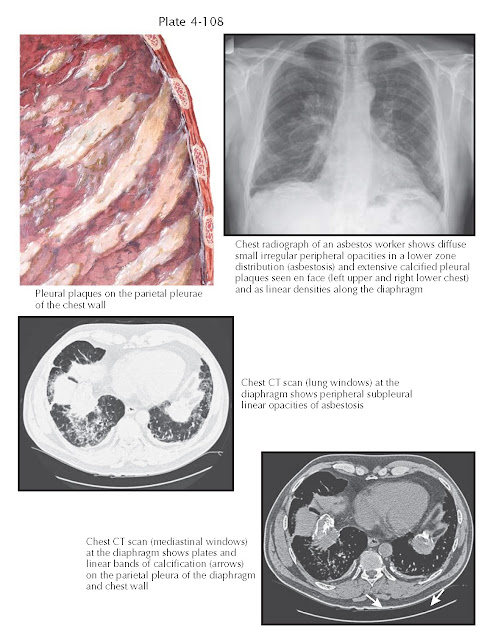 Asbestos causes several manifestations of disease in the pleural space surrounding the lung. All are believed to be related to the transport of ﬁbers from the epithelial and interstitial spaces through the centrifugal lymphatics to the visceral pleura and across the pleural space to the parietal pleura. The most common clinical manifestation of asbestos exposure is pleural plaques. These lesions are benign ﬁbrous deposits in and beneath the parietal pleura, most commonly on the lower costal and diaphragmatic surfaces of the chest. Pleural plaques seen in proﬁle on the plain chest radiograph appear as dense linear thickening of the pleural surface several millimeters deep and several centimeters long. Pleural plaques may show dystrophic calciﬁcation that appears in proﬁle as thin dense lines along the pleural surface. HRCT scanning demonstrates plaques easily, and areas of thickening or calciﬁcations can often be found when the plain chest radiograph is normal. The plaques may appear 20 to 50 years after initial asbestos exposure and gradually increase in size and extent of calciﬁcation. Plaques require less exposure than asbestosis or other pleural manifestations. Pleural plaques alone cause no signiﬁcant symptoms and little or no pulmonary function impairment; they require no treatment. Bilateral lower lung zone calciﬁed pleural plaques are virtually pathognomonic of asbestos exposure and thus may serve as conﬁrmation of a signiﬁcant occupational exposure history.

Moderate asbestos exposure is associated with an exudative or serosanguineous benign pleural effusion in a small fraction of workers. This manifestation of asbestos-related pleural disease may be seen relatively early after exposure and often occurs before plaques or ﬁbrosis is apparent. The main issue with a benign asbestos-related pleural effusion is usually the concern that it may represent a mesothelioma; extensive testing may be needed to prove that it does not. Rarely, asbestos can cause diffuse pleural thickening that leads to clinically signiﬁcant restrictive lung disease. Areas of pleural thickening can lead to entrapment of the subadjacent lung tissue to cause a site of “rounded atelectasis.”

Exposure to asbestos is associated with increased risks for two types of malignancy: mesothelioma in non-smokers and smokers and bronchogenic carcinoma in smokers. The frequency of both cancer types increases with higher asbestos exposure levels, and both may be seen at doses that do not cause asbestosis or benign pleural disease. Malignant mesothelioma of the pleura or the peritoneum is a locally aggressive and invasive mesothelial cancer that occurs very rarely in the general population (fewer than one case per 100,000 per year) but is found with greatly increased frequency among individuals exposed to asbestos. The risk appears to be greater for exposure to crocidolite than to chrysotile. Patients with localized mesothelioma may sometimes respond to aggressive surgery or to chemotherapy, but for most patients, the median survival time remains short (8-14 months from diagnosis), and the mortality rate is high. The prevalence of mesothelioma has risen dramatically in the past 20 years and may now be reaching a peak that will decline in parallel with reduced asbestos use and exposure.