Coal worker’s pneumoconiosis (CWP) results from the inhalation of respirable coal dust that ﬁrst settles within the alveoli and later accumulates near the respiratory bronchioles. There, coal macules form with limited scarring, leading to disease of the respiratory bronchioles and focal emphysema. As with most lung diseases caused by the accumulation of indigestible mineral particles or ﬁbers in the lung, CWP develops slowly over decades and requires high levels of exposure. The disease is limited to miners of hard coal, particularly underground tunnel workers, and to those who process or handle coal where large amounts of dust are produced by crushing or bulk moving machines.

CWP was common in the United States and Europe during the late nineteenth through mid-twentieth centuries when coal was used widely for industrial and domestic fuel, mechanized mining techniques generated large amounts of respirable particles, and dust control measures were not used. Coal is elemental carbon, often mixed with small amounts of siliceous minerals. In tunnel mines, it may be necessary to drill and blast through granite or other stone with a high fraction of crystalline silica to follow and extract the coal seam. Occupational safety regulations led to wet cutting techniques, improved ventilation, and robotic mine face equipment that reduced airborne dust and decreased the number of miners needed at the cutting face. Clinically signiﬁcant CWP has become much less common in industrialized nations but is still a major health problem in developing countries. 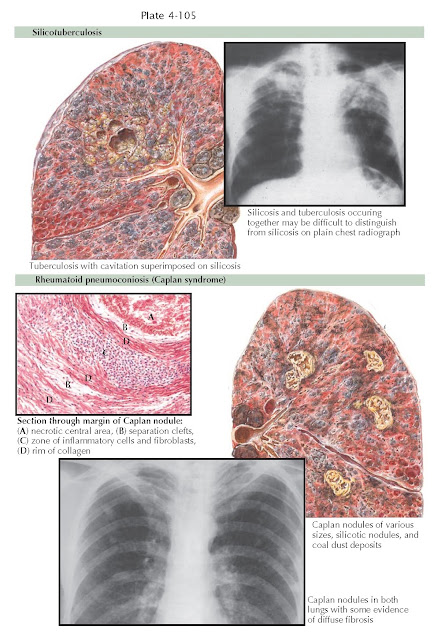 Workers with early or limited CWP evidence a pattern on plain chest radiograph of diffuse small nodular opacities 1 to 10 mm in diameter and may have no clinical symptoms or pulmonary dysfunction. A small minority of workers develop progressive disease with coalescence of the small nodules into large opacities surrounded by bands of dense ﬁbrosis and emphysema, usually with upper lobe predominance. This advanced disease is considered complicated pneumoconiosis or progressive massive ﬁbrosis (PMF). It is associated with restriction of the vital capacity, overdistension of the residual volume, and often signiﬁcant airﬂow limitation as well (a mixed disorder). The diffusing capacity may be reduced early in the course of disease, but hypoxemia is a late consequence. Cough and short-ness of breath with exertion become worse as CWP progresses.

The clinical manifestations of CWP appear to be attributable to a combination of factors. High levels of coal mine dust exposure cause “industrial bronchitis” during (and shortly after) exposure, with cough and the expectoration of black sputum but with no pulmonary function effects or only mild airﬂow obstruction. Pure carbon may have little impact on the function of the lung, although large amounts of black pigment may be stored in prominent dust macules and lymphoid tissues. Silica mixed with carbon or inhaled independently during drilling can cause concomitant silicosis. Most importantly, many miners smoke tobacco and thus emphysema or chronic obstructive pulmonary disease (COPD) synergize with the effects of coal dust. There is no treatment for CWP directly, but complicating diseases such as bronchitis, COPD, rheumatoid arthritis, tuberculosis, and secondary infections can be given speciﬁc or symptomatic treatment. Tobacco smoking prevention or cessation is critical.