The inhalation of dusts and noxious gases into the lung may result in little damage or reaction if the agents have low biological activity or the exposure is minimal, but the results can be devastating injury, inﬂammation, or ﬁbrosis if the agent is potent and carried by high dose or prolonged exposure. Virtually any fume, particle, or ﬁber that can be inhaled might cause a response in the lung if the material is in any way biologically active and the dose and exposure are sufﬁcient.

Exposures to inorganic mineral dusts (e.g., silica, asbestos, coal, mixed silicates) result in chronic lung diseases characterized by ﬁbrosis and distortion of tissue that produce progressive respiratory impairment. These diseases generally progress slowly over time, often taking decades from ﬁrst exposure to clinical symptoms. The extent of disease depends on the interaction between the intensity of exposure (airborne particle load), the duration of exposure (cumulative dose), and the time since exposure began. The key to control of these diseases is prevention by reducing the levels of airborne dust in the workplace. 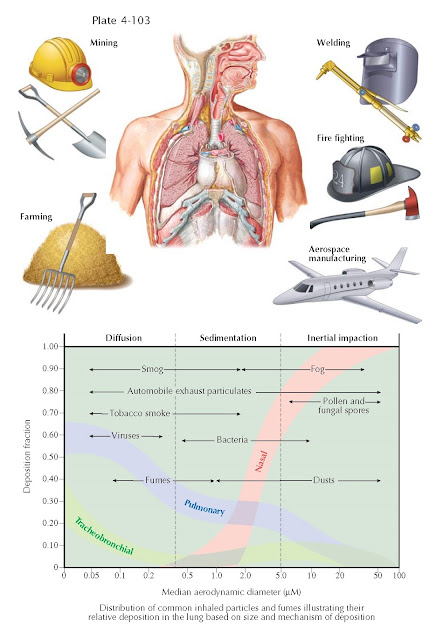 Many lung diseases caused by inhalation exposure to organic or metal particulates are the result of a speciﬁc immune response. Hypersensitivity pneumonitis (prototype, farmer’s lung disease), chronic beryllium disease, cobalt pneumoconiosis (hard metal disease), and others only appear after sensitization and the development of highly immunospeciﬁc cell-mediated and humoral immune responses. In contrast to the pneumoconioses caused by inorganic dusts and ﬁbers, these diseases usually do not require a high level of exposure to trigger them. After being sensitized, individuals may respond intensely to very low ambient levels of the offending agent and may become symptom free if exposure can be avoided. There is great variation among individuals, and only a minority of those exposed may develop disease. In some instances (e.g., beryllium), the disease may progress for years after the exposure ends. Brief episodes of disease caused by immune responses to inhaled materials may clear and leave no permanent lung damage, but repeated episodes or prolonged exposure may result in end-stage ﬁbrosis and severe respiratory impairment.

Toxic gases and fumes, smoke from ﬁres, and volatile chemicals used in industrial processes can cause injury to the lung when they are inhaled. In most instances, these reactions are acute, occurring within seconds to 48 hours of inhalation. If the injury is mild, complete resolution without permanent impairment can be expected; if the injury is more severe, then repair may be incomplete and may involve scarring. The speed and extent of injury from inhaled gases depends on the biologic reactivity of the chemical and its solubility in the water-based mucus that lines the lung. For example, whereas highly soluble compounds, such as hydrochloric acid (HCl), dissolve readily in mucus and cause injury primarily to the upper airway and larger bronchial airways, relatively less soluble compounds, such as nitrogen dioxide (NO2), produce damage primarily at the level of the alveoli and small airways. Intense exposure to highly irritating fumes (e.g., chlorine gas, smoke) may cause an instant response in the larynx, producing glottic closure and limiting more distal damage at the expense of respiration.

Speciﬁc syndromes with both respiratory and systemic symptoms can occur after inhalation exposures.

Metal fume fever is seen in welders and other workers who heat zinc, copper, and other metals to high temperatures, generating fumes and small respirable particles. Symptoms of metal fume fever occur 4 to 8 hours after exposure and consist of an inﬂuenza-like illness with fever to 40˚C, chills, headache, cough, sore throat, shortness of breath, nausea, muscle aches, and malaise. The illness is self-limited and usually clears within 24 to 48 hours of its onset. It is believed to be caused by both the direct irritation of the respiratory tract and the absorption of the metal into the systemic circulation. Organic dust toxic syndrome (ODTS) is a form of inhalation fever that results from exposure to aerosolized endotoxin (bacterial cell wall products), glucans (fungal cell wall products), and related compounds. A ﬂulike illness develops 4 to 8 hours after exposure, with fever, muscle aches, malaise, cough, shortness of breath, and sometimes wheezing. Exposures can occur in a wide variety of settings, such as swine conﬁnement facilities, sewage treatment plants, cotton processing gins, grain storage silos, and grain milling facilities. In patients with metal fume fever, ODTS, and other inhalation fevers, tolerance may occur if exposure is frequent, with loss of tolerance after an exposure holiday. Daily exposure may cause chronic bronchitis.