Throughout the 20th century, cases of pulmonary disease caused by mycobacteria other than Mycobacterium tuberculosis were described. Prominent among the “atypical” species have been Mycobacterium avium, Mycobacterium intracellulare, and Mycobacterium kansasii. Unlike M. tuberculosis (which has no common reservoir other than infected humans and is spread exclusively by human-to-human aerosols), the nontuberculous mycobacterial (NTM) lung diseases are found widely distributed in water and soil and appear to be acquired from these environmental sources. 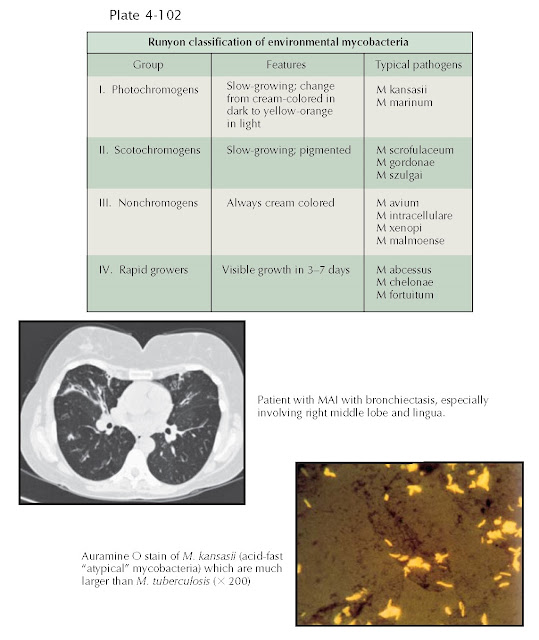 Unlike tuberculosis (TB), for which there are carefully compiled annual data, there is less reliable information on the prevalence and distribution of NTM lung disease. A major issue is that not all patients whose sputum yields an NTM on culture have true “disease,” and, in fact, 50% to 80% of patients with positive NTM cultures may actually be “contaminated” by these environmental microbes.

However, many U.S. clinicians believe that they are seeing more cases, especially among women. In Canada, although the incidence of pulmonary NTM is roughly 60% that of TB, the prevalence of NTM lung disease over the next decade is estimated to become substantially greater than that of TB. This is because of many factors more than 80% of TB cases are treated and cured within 9 months, the observed incidence of TB is decreasing, cure rates for NTM lung disease are probably in the range of 50% to 60%, and treatment failure or relapses are common. Hence, an accumulation of NTM patients in Canada and the United States over time is expected.

Additional emphasis should be placed on the fact that most TB patients started on therapy rapidly become and remain asymptomatic. By contrast, many NTM patients with bronchiectasis have protracted symptoms and, even if the NTM is cured or suppressed, they experience intercurrent infections, commonly with gram-negative bacilli such as Pseudomonas aeruginosa.

In virtually all recent surveys, the bulk of disease is associated with M. avium or M. intracellulare. Although distinct species, these organisms are so similar that they are referred to as M. avium complex (MAC) or MAI.

M. kansasii has been a prominent pathogen in the south-central United States but seems relatively less common in recent experience. Rapidly growing mycobacteria (group IV in the Runyon system) are being seen with increasing frequency; Mycobacterium abscessus is much more common than Mycobacterium chelonae. Other NTM that seem to vary in prevalence regionally include Mycobacterium xenopi, Mycobacterium simiae, Mycobacterium malmoense, and Mycobacterium szulgai.

Given the potential for contamination, the American Thoracic Society (ATS) has established criteria for clinical relevance, which include typical symptoms, suitable radiographic ﬁndings (cavities, bronchiectasis, scattered nodular opacities) and two or more positive sputum cultures or one positive bronchial aspirate or wash. The clinical signiﬁcance is enhanced if it is one of the more common pathogens. Mycobacterium gordonae, by contrast, is almost universally a contaminant.

Two of the most intriguing aspects of the cases among women are the physical-anatomic features and racial distribution. Unlike TB, which is more common among persons of color in the United States, the pre-ponderance of NTM disease is seen among whites and, less frequently, Asians. There is a notable paucity among African American individuals. The prototypical patient is variable tall and slender; subtle scoliosis is common, and many patients have narrowed antero- posterior distance or pectus excavatum. Mitral valve prolapse is found with higher than normal frequency.

Although the disease can involve any region of the lungs, bronchiectasis and volume loss of the right-middle lobe or lingula are strikingly prominent.

Antimicrobial therapy is delineated in the 2007 ATS guidelines. For the slowly growing species (M. kansasii, MAC, M. xenopi, and so on), regimens composed of clarithromycin (or azithromycin), RIF, and EMB are usually used. An injectable agent such as amikacin may be added initially for more extensive disease.

However, for the more common rapidly growing mycobacterial species such as M. abscessus and M. chelonae, an intravenous regimen such as imipenem or cefoxitin and either amikacin or tobramycin appears more efﬁcacious.