The maturation and myelination of peripheral nerves, including cranial nerves, is not complete at birth. Thus these axons, not yet fully protected by myelin, associated glial cells, and connective tissue, are susceptible to perinatal injury. Brachial plexus injuries in the newborn now occur much less commonly, although the incidence is still approximately 1 in 1,000 live births. The injury results from traction forces in delivering the shoulder in vertex deliveries and delivering the head in breech deliveries. The associated obstetric factors are occipitoposterior or transverse presentation, the use of oxytocin, shoulder dystocia, and large babies (weighing more than 3,500 g) with low Apgar scores.

Brachial birth palsy is believed to be secondary to a stretching of the plexus by traction, with the nerve roots being anchored by the spinal column and cord. In less severe lesions, only the myelin sheath may be damaged, which is evidenced by swelling and edema that may, in turn, damage the myelin. If only a small segment of the axon is affected or if it is stretched but not ruptured, quick repair and recovery are likely. However, if the axon is interrupted, repair can take a very long time, considering that the rate of axonal growth is believed to be 1 mm/day. If the axon is completely ruptured, recovery is unlikely. Bilateral brachial injuries almost always indicate spinal involvement, and avulsion of the nerve roots may be evident on magnetic resonance imaging. Upper brachial plexus injuries involve the junction of C5 and C6 roots (Erb point), and lower injuries involve the junction of C8 and T1 roots. 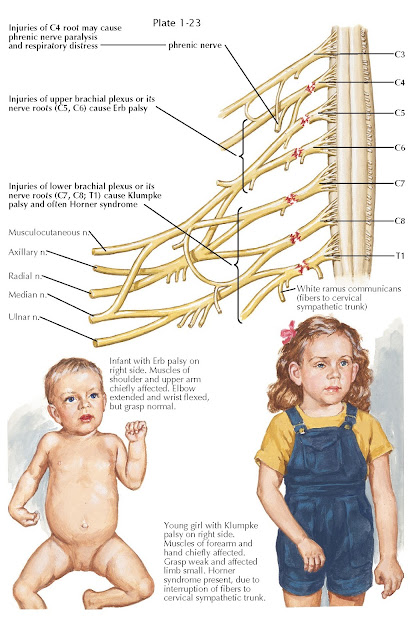 Upper Brachial Plexus Injury (Erb Palsy). This is the most common of the brachial plexus injuries, affecting muscles supplied by C5 and C6 and accounting for 90% of the total incidence. An asymmetric Moro response is usually the first indication of the injury. The upper extremity assumes the “waiter’s tip” position: the shoulder is adducted and internally rotated; the elbow is extended; and the forearm is pronated, with the hand in flexion. A mild sensory loss may develop over the lateral aspect of the shoulder and arm, but is rather difficult to distinguish. Associated fractures of the clavicle or humerus must be ruled out, and fluoroscopic examination should be carried out to exclude the rare diaphragmatic paralysis caused mainly by a C4 lesion.

Lower Brachial Plexus Injury (Klumpke Palsy). A pure lower brachial plexus injury is quite uncommon, and most cases of Klumpke palsy involve the more proximal muscles supplied by C7 or C6. An absent grasp reflex is the most prominent clinical feature. Involvement of sympathetic fibers from T1 causes Horner syndrome (ptosis, miosis, anhidrosis). A significant sensory deficit is usually present. Infants and children may sometimes traumatize their fingers unwittingly, with occasionally severe results such as loss of a fingertip. Prognosis for full recovery in these infants is poor. The upper extremity often remains small and distally foreshortened.

Treatment. In all cases of brachial plexus injury, a thorough evaluation is indicated. The limb should be placed in its best functional position, that is, across the chest, not abducted, and flexed. Gentle, passive, range- of-motion exercise should be initiated within 7 to 10 days of birth, and physical or occupational therapy should be continued throughout at least the first year of life. Hand and wrist splints can be used as necessary. Most infants will experience marked recovery of function in the first few months. If no recovery is observed, electromyography, can be useful to determine the extent of the injury. For infants with persistent severe injury and no evidence of improvement at 4 to 6 months of age, magnetic resonance imaging may be helpful in determining whether the infant will benefit from a brachial plexus repair with nerve grafts. Although brachial plexus repair does not restore normal function, it can provide carefully selected infants with functional improvement. After the child is 5 to 6 years of age, muscle transfers may be helpful.