MORPHOGENESIS AND REGIONAL DIFFERENTIATION OF THE FOREBRAIN

MORPHOGENESIS AND REGIONAL DIFFERENTIATION OF THE FOREBRAIN

The forebrain, unlike the spinal cord, does not receive signals from the notochord and somites. Thus its regional differentiation depends upon distinct mechanisms that result in the growth and differentiation of the two telencephalic vesicles into the cerebral cortex, hippocampus, basal ganglia, basal forebrain nuclei including the amygdala, and the olfactory bulb. After the anterior neural tube has closed a population of neural crest derived mesenchymal cells migrates into the head and surrounds the newly formed prosencephalic vesicle. These mesenchymal cells are a key source of inductive signals, playing a similar role to that of the notochord and somites in the spinal cord and hindbrain. The mesenchymal cells signal directly to the forebrain neuroepithelium to influence the establishment of signaling centers. These signaling centers resemble the floor plate and roof plate of the spinal cord and hindbrain. Thus there is an anteromedial source of sonic hedgehog and a posteromedial source of BMPs as well as WNTs that influence further regional and cellular differentiation. In addition, there is an anteromedial domain that produces fibroblast growth factor (FGF) signals that are essential for forebrain regional differentiation. Thus the interaction between mesenchyme and forebrain neuroepithelium is essential for establishing the foundations of regional differentiation in the forebrain.

Once these interactions have progressed, the prosencephalic vesicle expands so that there are two telencephalic vesicles. Based on their proximity to anteromedial and anterior sonic hedgehog and FGF signals or posteromedial BMP and WNT signals, the telencephalic vesicles become divided into anterior and posterior territories based on differential expression of multiple transcription factors. The posterior territory is referred to as the pallium. It generates the cerebral cortex (neopallium) as well as the hippocampus and pyriform cortex (archipallium). The anterior territory is referred to as the ganglionic eminences. These structures generate the corpus striatum or basal ganglia as well as nuclei of the basal forebrain, including the amygdala. Finally, at the ventral and anterior aspect of each telencephalic vesicle, the olfactory bulb evaginates and extends anteriorly. 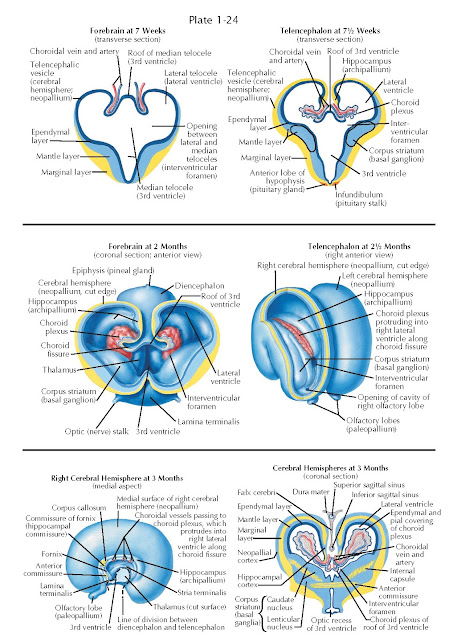 The division of the forebrain into the telencephalic vesicles is accompanied by the elaboration of the choroid plexus that emerges at the posterior midline. At this region, choroidal veins and arteries, generated from angiogenic mesenchymal cells outside the brain, are adjacent to the posterior neuroepithelium. Subsequently, these blood vessels continue to grow in close apposition to a very attenuated neural-derived epithelium. Together, the blood vessels and this attenuated forebrain epithelium constitute the choroid plexus. In the adult brain, the choroid plexus serves as an interface between systemic circulation and the cerebrospinal fluid that fills the ventricular system to maintain ionic balance and deliver molecular signals for homeostatic control. The choroid plexus actually grows into the ventricle so that the “pial” surface of the neuroepithelium is actually exposed to the cerebrospinal fluid. In the embryo, the choroid plexus is apparently part of a dynamic set of tissues (including the posterior and anterior domains that produce sonic hedgehog, BMPs and WNTs) that secrete signaling molecules into the embryonic forebrain CSF to influence forebrain stem cell proliferation and differentiation. Thus an essential source of molecular instruction for neural stem cell proliferation and specification in the forebrain is the cerebrospinal fluid, influenced by molecules secreted dynamically by the choroid plexus as it develops.

Subsequently, once neurogenesis and neuronal differentiation begin in the forebrain, a series of axon pathways, referred to collectively as the cerebral commissures, emerge to cross the midline, much like those that cross the midline in the spinal cord and hindbrain.

These include the corpus callosum, hippocampal commis- sure, and anterior commissure. The growth of these axon pathways from one telencephalic vesicle to the other involves similar molecules and mechanisms to those that influence the midline crossing of sensory axons that constitute the spinothalamic pathway. In addition to netrin, slit and its robo receptor, members of the Ephrin/Eph receptor family of adhesion molecules, seem to be essential for the development of the cerebral commissures, as does the calcium-independent adhesion molecule L1.