NEUROGENESIS AND CELL MIGRATION IN THE DEVELOPING NEOCORTEX

NEUROGENESIS AND CELL MIGRATION IN THE DEVELOPING NEOCORTEX

Most, if not all, cortical neurons are generated in or near the ventricle and migrate radially to the cortex that forms on top of the neuroepithelial precursors. Cortical neural stem cells, radial glia, maintain cell bodies at the ventricular zone, where they divide symmetrically and slowly. Radial glia also generate rapidly, asymmetrically dividing intermediate progenitors slightly displaced into the subventricular zone, where they generate postmitotic neurons. Radial glia serve a dual function. Their long processes directed toward the pia provide a migratory guide for newly postmitotic neurons through the ventricular and subventricular zones into the cortical plate, where they disengage and differentiate. Further constraints reflect the time when cortical neurons undergo their final cell division. Cortical neurons “born” first (become post mitotic earliest) form the preplate, the earliest histologic indicator of cortical differentiation. The preplate divides into the marginal zone, which becomes layer 1 of the cortex, and the transient subplate, which guides development of the overlying cortex. Early generated marginal zone and subplate neurons provide signals that influence migration and initial axon growth. Some early generated marginal zone neurons remain in layer 1 as Cajal-Retzius cells. Subplate neurons fare less well. A few become interstitial subcortical white matter neurons; however, most die postnatally. 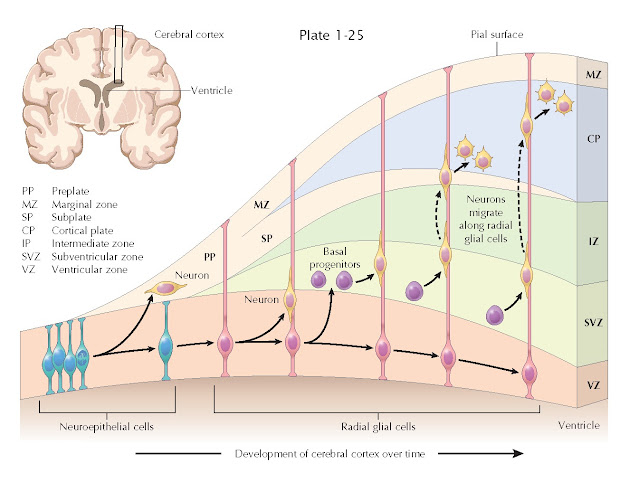 The earliest-born neurons of the cortex itself migrate through the preplate, splitting it into the marginal zone and subplate, thus constituting layer 6 of the cortex. Each successive cortical neuron cohort, generated during the last two thirds of gestation in humans, migrates past earlier-born neighbors to their final positions. Thus there is an “inside-out” gradient of cortical neurogenesis: early born neurons are deepest, and those born last, except for Cajal-Retzius cells, are superficial. These distinctions are accompanied by differences in which cortical neurons send their axons dendritic differentiation and connectivity.

Radial migration and the inside-out neurogenesis gradient together produce cortical projection neurons whose axons extend to other cortical regions or subcortical targets, such as the basal ganglia, pons, and thalamus, and use the excitatory neurotransmitter glutamate. Surprisingly, the other major class of cortical neurons, interneurons that use the inhibitory neurotransmitter gamma amino butyric acid (GABA), are not generated within the cortex. Instead, interneuron progenitors are found in two anterior forebrain domains: the medial and caudal ganglion eminences. These progenitors yield postmitotic GABAergic neuroblasts within the ganglion eminences that migrate into the neocortex. Initially, this migration is tangential, that is, parallel to the plane of the cortical sheet. When these neurons reach the cortical area where they will differentiate, they migrate radially in much the same way as projection neurons, using radial glial guides.

In the olfactory bulb, projection neurons (mitral cells) are also generated locally, and GABAergic interneurons migrate from the lateral ganglion eminence by a distinct migratory route called the rostral migratory stream. In some mammals, the rostral migratory stream remains in place and guides newly generated neurons from a proliferative zone called the anterior subventricular zone, or SVZ, to the olfactory bulb, perhaps throughout life. The human brain, however, lacks a rostral migratory stream after birth, and it is unlikely that new olfactory interneurons are generated long into postnatal life. In the cerebellum, interneurons (glutamatergic rather than GABAergic) are generated from a proliferative layer immediately beneath the pia, called the external granule cell layer. The postmitotic granule cells then migrate back into the rudimentary cerebellum, past Purkinje cells (cerebellar projection neurons, generated locally) using a glial guide, the Bergmann glia, to facilitate migration. Thus in several brain regions projection neurons and interneurons are generated in distinct proliferative zones, followed by migration that brings these neurons together to form circuits.

The complex history makes the neocortex vulnerable to developmental changes with potential impact on disease. Behavioral disorders, from autism and attention deficit/hyperactivity disorder (ADHD) to bipolar disorder and schizophrenia, may reflect, in part, changes in neurogenesis and migration. Cortical development demands exquisite precision so that neurons are generated at the right times and get to the right places. Small, but significant disruptions could lead eventually to subtle, but significant alterations of cortical circuits and the social, communicative, and cognitive behaviors they subserve. These hypotheses, which unite a spectrum of psychiatric diseases into a continuum of disorders of development o cortical connectivity, remain to be thoroughly tested.