Antroduodenal manometry measures the pressures over time in the antrum and duodenum. The procedure uses a catheter placed either nasally or orally into the stomach and out the pylorus and into the small intestine. The catheter is placed either fluoroscopically or endoscopically. Recordings are obtained from 5 hours (stationary recording) to 24 hours (ambulatory recording), measuring pressures from the stomach and small intestine and the coordination of their contractions, both in the fasting condition and in response to meals. The three main indications for antroduodenal manometry are to evaluate (1) unexplained nausea and vomiting; (2) the cause of gastric or small bowel stasis (e.g., neuropathic or myopathic disorders); and (3) suspected chronic intestinal pseudoobstruction when the diagnosis is unclear.

Decreased antral contractility and the phase III migrating motor complexes originating in the small intestine rather than in the stomach can be seen in gastroparesis. Occasionally, pylorospasm or irregular bursts of small intestinal contractions, which increase outflow resistance, can be observed. With an accurate stationary recording, a reduced postprandial distal antral motility index is correlated with impaired gastric emptying of solids. An average of less than one antral contraction per minute postprandially has been suggested as a simple estimate of significant hypomotility. Ambulatory studies, performed over 24 hours using solid-state transducers, allow correlation of symptoms with abnormal motility, but catheter migration in the stomach prevents quantitation of antral contractility. 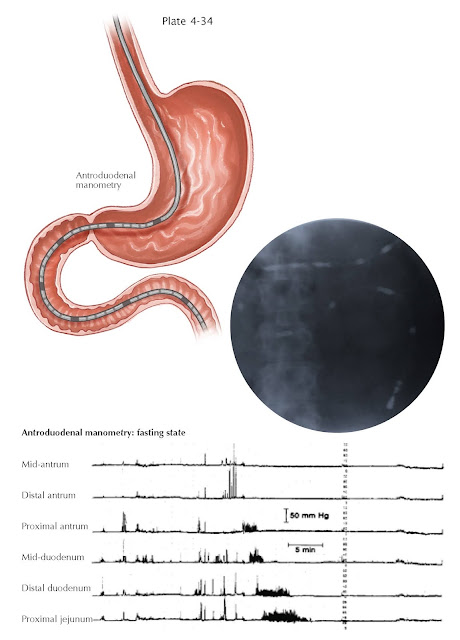 Antroduodenal manometry may differentiate between neuropathic and myopathic motility disorders, and it may suggest unexpected small bowel obstruction or rumination syndrome. Myopathic disorders, such as scleroderma or amyloidosis, have low-amplitude contractions (on average, < 10 mm Hg in the small intestine and < 40 mm Hg in the antrum) with normal propagation. Neuropathic disorders have normal amplitude but abnormal propagative contractions, seen readily in phase III of the migrating motor complex, such as bursts and sustained uncoordinated pressure activity, and a failure of a meal to induce the fed-type pattern. Occult mechanical obstruction of the small intestine is suggested by two patterns, (1) postprandial clustered contractions for more than 30 minutes separated by quiescence and (2) simultaneous prolonged (> 8 seconds) or summated contractions, suggesting a common cavity phenomenon from a dilated segment of intestine. Antroduodenal manometry may show a characteristic pattern of rumination; an increase in intraabdominal pressure at all levels of the upper gut (R waves), especially postprandially, indicates the act of rumination.

The absence of migrating motor complexes indicates a poor response to prokinetic agents. Some studies are performed with infusions of erythromycin or octreotide to predict the patient’s response to treatment with these agents.