Gastroscopy, esophagogastroduodenoscopy, or upper endoscopy is a procedure performed by a gastroenterologist that allows for visualization of the esophagus, stomach, and duodenum. It is an essential procedure used for both the diagnosis and treatment of disorders of the upper gastrointestinal tract. The examination has evolved from using rigid and semirigid instruments with fiberoptics to currently flexible instruments and videoendoscopy. At the tip of the endoscope there is a color chip that gathers images that are electronically transmitted to a video processor and a monitor in the endoscopy examination room. A light at the tip of the endoscope allows for illumination. Images are taken during the examination and can be stored. Endoscopes, which are typically 8 to 10 mm wide, also have a channel for biopsy. At the control head there are buttons that allow for air insufflation and suctioning of fluid and air. There are a number of indications for upper endos- copy, including dysphagia, GERD, eosinophilic esophagitis, Barrett esophagus, gastric metaplasia, peptic ulcer disease, dyspepsia, H. pylori infection, celiac disease, and management of upper gastrointestinal malignant lesions. Upper endoscopy has several therapeutic uses, including hemostasis of bleeding ulcers, varices, Dieulafoy lesions, and arteriovenous malformations; removal of foreign objects; dilation of the esophagus; and stent placement.

Prior to performing upper endoscopy, it is key to understand the indication for the procedure as well as the risks and benefits for each case. Upper endoscopy can be performed on an elective, urgent, or emergent basis. Some of the most common indications for upper endoscopy are listed above. Complications to be cognizant of include excessive bleeding, infection, perforation, aspiration, cardiopulmonary events, and adverse reactions to anesthetic agents. 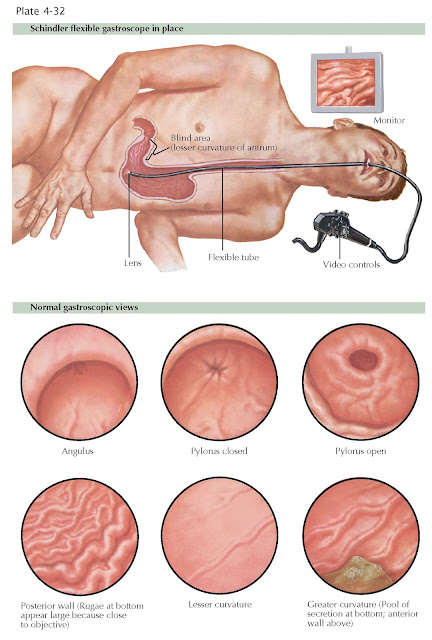 For upper endoscopy, a moderate level of sedation is used to reduce pain and induce sedation. The medications used vary, but typically a combination of a short-acting benzodiazepine and opiate or propofol is used. In addition, local anesthetics can be gargled, sprayed, or applied directly to the pharynx to suppress the gag reflex during upper endoscopy.

Once the patient is adequately sedated, the endoscope is passed over the tongue and through the pharynx, typically under direct visualization of the vocal cords. The endoscope passes the pharynx, and the esophagus is examined and visualized using air insufflation. The gastroesophageal junction is inspected for any mucosal abnormalities. The endoscope enters the stomach, where food or bilious contents may be seen. The endoscope is retroflexed, by turning the tip of the endoscope in a J shape, to permit full visualization of the gastroesophageal junction and the fundus. Hiatal hernias are identified on retroflexion. On examination of the pylorus, contractions can be seen. With mild pressure the endoscope passes through the pyloric channel into the bulb of the duodenum. The endoscope is advanced to the second portion of the duodenum and, if needed, into the third portion. The ampulla of Vater can be seen on upper endoscopy but is best visualized with a side-viewing instrument.

If any masses or mucosal abnormalities are seen in the esophagus, stomach, or duodenum, biopsies can be taken using a forceps that is placed through the biopsy channel. Specimens are placed in a fixative medium and sent for histologic examination.