FUNCTIONAL CHANGES IN GASTRIC MOTILITY AND SECRETION IN GASTRIC DISEASES

FUNCTIONAL CHANGES IN GASTRIC MOTILITY AND SECRETION IN GASTRIC DISEASES

Gastric secretion and motility vary considerably from one individual to another and in the same individual from time to time. In the stomachs of subjects in whom no disease of the upper gastrointestinal tract can be demonstrated, the emptying time of a standard meal may vary over 100% from the average, and the concentration of HCl (acid) secreted in the basal state or in response to the standard stimuli ranges from 0 to 100 mEq/L or more. 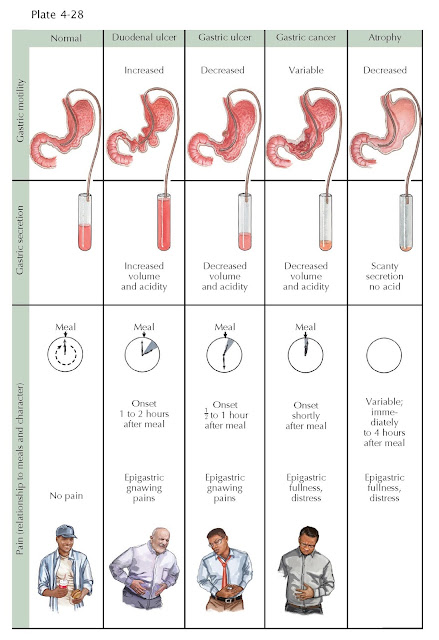 A tendency to gastric hypertonicity and hypermotility is observed in many duodenal ulcer patients. Initial emptying of a meal may be delayed for a considerable time because of reflex antral spasm incited from the ulcerated duodenal bulb; after the pressure by the active contractions of the stomach overcomes the pyloroantral resistance, evacuation proceeds rapidly, so that the final emptying time may be considerably shortened. The most important motility change occurs when the ulcer area becomes inflamed and edematous, or scarred, so that the gastric outlet is obstructed. After a preliminary period of hypermotility, the stomach becomes atonic, a condition immediately recognized roentgenographically with the first swallow of barium. The stomach, in cases of duodenal ulcer, tends to secrete excessive acid, in both volume and concentration, so that the average output of acid in duodenal ulcer patients greatly exceeds the average of all other categories, including the normal. The rare disease described by Ellison and Zollinger is characterized by peptic ulceration in the upper intestine distal to the duodenal bulb and secretion of enormous quantities of gastric acid.

It is not certain whether hypersecretion exists before the duodenal ulcer starts to develop, but it does persist after the ulcer heals. This may be due to an underlying H. pylori infection affecting the inhibitory D cells of the stomach secreting somatostatin that normally inhibits gastric acid secretion.

The pain in duodenal ulcer is most often described as a gnawing or intense hunger sensation, coming on characteristically from 1 to 2 hours after a meal.

The pathophysiologic phenomena caused by a gastric ulcer depend on the site of the ulcer in the stomach. The closer the ulcer is to the pylorus, the more the manifestations resemble those of duodenal ulcer. In peptic ulcer of the lesser curvature at or proximal to the incisure, gastric motility is not notably altered from normal, except for some local hypertonicity of the musculature at, and frequently opposite, the ulcer site. When the gastric emptying is delayed in a case of ulcer of the body of the stomach, the presence of a coexisting duodenal ulcer should be suspected. The gastric stasis resulting from chronic pyloric narrowing by a duodenal ulcer may be a factor for formation of a gastric ulcer.

The pain of gastric ulcer tends to occur relatively soon after eating, because the gastric acid content is in immediate contact with the lesion. For this reason, smoothness and blandness of the diet are much more important in a gastric than in a duodenal ulcer. Now that proton pump inhibitors are used in treatment, eating a bland diet has become less important.

Gastric carcinoma is not characterized by any general motility pattern, except for the obvious changes to be expected in an area of infiltration into muscle or where the tumor produces obstruction.

In atrophy of the gastric mucosa (schematically indicated in the picture by a flattened mucosal surface, although the thinning of the mucosa by loss of the normal glandular arrangement does not necessarily result in obliteration of the rugal folds), the reduction in glandular elements results in greatly diminished acid secretion and often no HCl secretion even with maximal stimulation. The reduction of gastric acid results in a secondary elevation of the systemic hormone gastrin, trying to signal to increase gastric acid secretion. Thus, an elevated serum gastrin level may be seen in either Zollinger-Ellison syndrome or pernicious anemia with its gastric atrophy. Differentiation of these two entails the presence of ulcers in Zollinger-Ellison syndrome or measuring gastric acidity (low in pernicious anemia but high in Zollinger-Ellison syndrome). If motility is affected at all in gastric atrophy, it is in the direction of a decrease.