When the outlet of the stomach at the pylorus becomes narrowed to the point of interference with gastric emptying, the gastric musculature responds at first with increased peristalsis in an effort to build up sufficient pressure to overcome the resistance at the stomach’s pyloric end. At this stage, the patient experiences a sensation of “burning” in the epigastrium or left hypochondrium. With persisting obstruction and further stagnation of the stomach contents, both of ingested food and of gastric secretions, the stomach begins to dilate; the musculature becomes atonic, and very little peristaltic activity is present. The patient now complains of fullness, vomiting (in the late afternoon or evening or during the night) of undigested food eaten many hours earlier, and foul eructation. If the obstruction is unrelieved, vomiting becomes more frequent and more copious. With so little gastric contents now passing into the intestine because of the profound gastric atony and pyloric obstruction, the patient is not able to keep up with the fluid and electrolytes lost in the vomitus; dehydration, hypochloremia, hypokalemia, and alkalosis supervene. These, in turn, affect renal function, with the consequent development of oliguria, azotemia, and retention of other electrolytes. Clinically, the patient is weak, anorexic, and drowsy. Unless measures are instituted to correct the metabolic disorder and relieve the obstruction, the condition progresses to irreversible tissue damage and a fatal outcome. 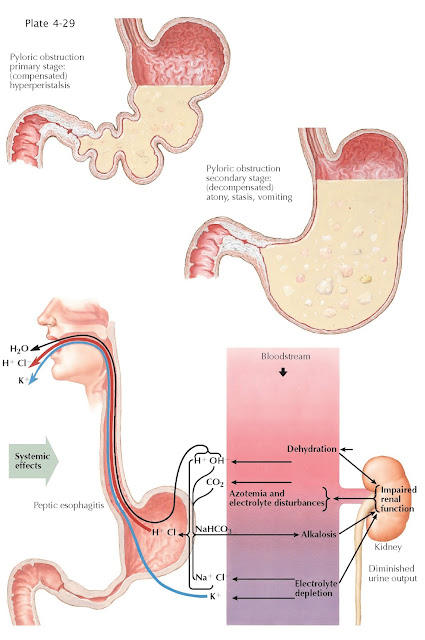 Pyloric obstruction is not the only cause of vomiting. Gastroparesis is a more common cause, with delayed gastric emptying often from antral hypomotility without any pyloric obstruction. The diagnosis of pyloric obstruction may be suspected by the preceding history, the pattern of the emesis, the appearance of the vomitus, and the presence on physical examination of a succussion splash (splashing of gastric contents heard on auscultation when gently rocking the patient). In duodenal ulcer, which is the most common cause of pyloric obstruction, the patient usually gives a history of ulcer symptoms. The vomiting is at first intermittent, perhaps at intervals of 2 or 3 days, and the vomitus often contains recognizable particles of food eaten the previous day. The quantity of fluid and ions lost by vomiting is largely dependent upon the degree of gastric dilatation and, thereby, upon the length of time during which the pyloric obstruction develops and remains incomplete (i.e., upon the time between the primary stage, in which the obstruction is “compensated for” by increased peristalsis, and the secondary stage, in which the stomach becomes atonic).

As with any excessive vomiting from whatever cause, the patient loses appreciable amounts of fluids, hydrogen ions, chloride ions, and potassium. The loss of potassium is attributable to the fact that the parietal cell secretes significant amounts of this ion. Because the gastric juice is poor in sodium, usually no sodium deficiency occurs, and while sodium remains in the blood, the bicarbonate ion substitutes for the chloride ion.

Vomiting does not ordinarily occur in uncomplicated ulcer disease, except when the ulcer is located in the pyloric canal, but many ulcer patients empty the stomach by means of vomiting to obtain relief from the pain.

Management of the consequences of repeated or excessive vomiting consists of fluid and electrolyte replacement and evacuation of the stomach with a nasogastric tube for 24 to 72 hours. If the obstruction itself is not relieved, surgery is necessary to reestablish gastrointestinal passage, but it should not be under-taken before the fluid and electrolyte balance has been restored.

A clinical and physiologic disturbance closely resembling that of pyloric obstruction may result from excessive ingestion of a soluble alkali and a rich source of calcium, such as ilk; this is called the milk-alkali or Burnett syndrome.