Having the symptom of nausea is a disagreeable experience that is difficult to define as well as distressing to experience. Nausea is often described as a sick feeling or a feeling of imminent vomiting. Nausea generally precedes vomiting; a notable exception to this is vomiting because brain tumors are present. Nausea may occur, continuously or in waves, without vomiting, especially if the stomach is empty. Salivation, pallor, tachycardia, faintness, weakness, and dizziness are frequent concomitants.

The biologic purpose of nausea may be the prevention of food intake, and of vomiting the expulsion of food or other substances already ingested, in circumstances where their presence in the upper gastrointestinal tract is unfavorable to the functioning of the organism. For instance, the loss of gastric tonus and peristalsis, which occurs in motion sickness, may make it expedient for the gastric contents to be gotten rid of in that condition. Because nausea and vomiting may result from disturbances in practically any part of the body, the teleologic significance of these symptoms is not always apparent; indeed, in certain situations they appear to be contrary to the welfare of the individual. 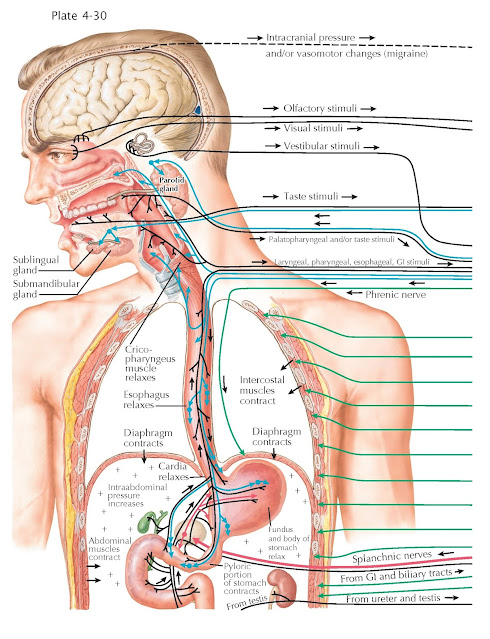 Nausea and vomiting may be precipitated by emotional disturbances; by intracranial vasomotor and pressure changes; by unpleasant olfactory, visceral, or gustatory stimuli; by functional or anatomic alterations in the thoracic and abdominal viscera, including the urogenital tract; by intense pain in somatic parts; by exogenous or endogenous toxins; by drugs (notably the opiate narcotic analgesics); and by stimulation of the vestibular apparatus (most commonly by motion). Impulses from all of these sources reach the CNS via the corresponding sensory nerves. It is possible that the medullary emetic elements make ascending connections with some cortical area concerned in the perception of nausea, and that these connections are activated before the impulses stimulating the emetic mechanism have reached the vomiting threshold.

The CNS control of vomiting is vested in two areas: one, called the vomiting center, is located in the lateral reticular formation of the medulla, in the midst of the cell groups governing such related activities as salivation and respiration. The other, called the chemoreceptor trigger zone, is in a narrow strip along the floor of the fourth ventricle in close proximity to the vomiting center. The functions of the two areas are distinct, though not independent. The vomiting center is activated by impulses from the gastrointestinal tract and other peripheral structures. The chemoreceptor trigger zone is stimulated by circulating toxic agents and by impulses from the cerebellum; influences of this zone on the vomiting center produce the resulting emetic action. Thus, ablation of the chemoreceptor zone abolishes the emetic response to apomorphine, a centrally acting emetic, and to intravenously injected copper sulfate, which acts in the same way, but not to orally administered copper sulfate, because the latter exerts a peripheral action via the autonomic nerves to the vomiting center. Ablation of the vomiting center, on the other hand, abolishes the emetic response to apomorphine and to injected copper sulfate, because vomiting does not occur when the vomiting center is destroyed. Vomiting may be analyzed as follows: Impulses set up by irritation in any somatic or visceral parts or in any of the sense organs pass, by way of their respective sensory nerves, to reach the medulla, where they activate the vomiting center; toxic agents, whether introduced into the body or accumulated endogenously, act upon the chemosensitive trigger zone, from whence impulses reach and activate the nearby vomiting center. Before the vomiting threshold is exceeded, impulses passing up to the cortex give rise to the sensation of nausea. The vomiting center coordinates the discharge of impulses from adjacent neural components to the various structures that participate in the act of vomiting. Salivation, which almost invariably precedes the actual ejection of the vomitus, is stimulated by impulses from the salivary nuclei. Contraction of the intercostal muscles and of the diaphragm produces a sharp inspiratory movement and increased intraabdominal pressure, an effect that is abetted by contraction of the abdominal muscles. Closure of the glottis forestalls aspiration into the respiratory passages. The pyloric portion of the stomach contracts; the body of the stomach, the cardia, the esophagus, and the cricopharyngeus muscle relax; and the gastric contents are forced out through the mouth and, in a vigorous emesis, through the nose as well.

Nausea and vomiting, brought on by motion, result from stimulation of the vestibular organs by movements of the head, neck, and eye muscles, and by traction on the abdominal organs. The type of motion necessary to precipitate motion sickness does not require a vertical component, as is evident from the fact that some individuals develop the symptoms merely from being rotated or from riding backward in a train. In such instances, attempts to resolve the visual disorientation by movements of the eyes and head may result in stimulation of the labyrinth, either directly or by the fall in gastric tonus which may occur with eye movements of this type. That visual stimuli are not essential for the development of motion sickness is evident from the fact that even blind persons may be susceptible.

Rapid downward motion that comes to a sudden stop or is followed by upward motion causes the abdominal viscera to sag and pull on their attachments; this is the origin of the sinking feeling experienced at the end of a rapid descent in an elevator or in a sudden sharp drop in a plane. The sensation would not occur if a person were to do a headstand in an elevator, and it would be reduced if a person were in a horizontal position when a plane was bouncing up and down, because the viscera cannot be displaced as far in the anteroposterior as in the craniocaudal direction. Nausea and retching may be induced in a patient under spinal anesthesia by down-ward traction on the exposed stomach. Impulses set up by these visceral stimuli pass in the autonomic nerves, chiefly the vagus nerves, to the vomiting center. Yet the vestibular mechanism is in some way concerned in the effect, because motion sickness does not occur in the absence of the vestibular organs. 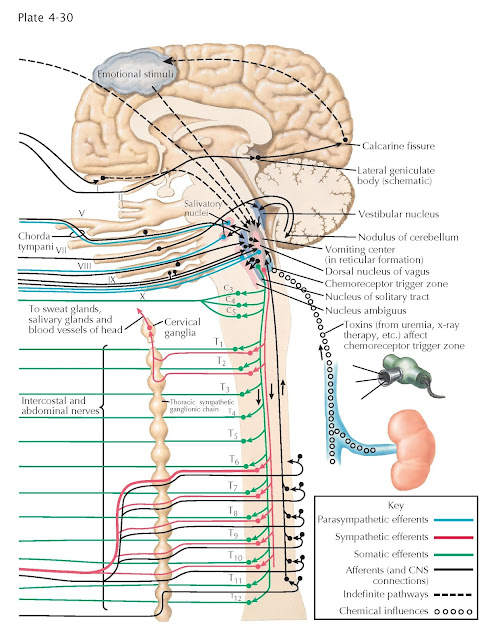 Impulses mediating nausea and vomiting by vestibular stimulation originate principally in the utricular maculae of the labyrinth, pass by way of cranial nerve VIII to the vestibular nuclei, to the uvula and nodulus of the cerebellum, to the chemoreceptor trigger zone, and, finally, to the vomiting center.

Nausea, besides being an unpleasant symptom that is sometimes difficult to relieve, becomes a serious clinical problem if it is sufficiently prolonged to interfere with nutrition. Primary nausea (i.e., nausea occurring in the postabsorptive state) occasionally accompanies eye strain, myocardial infarction, azotemia, and visceral neoplastic disease. Protracted vomiting is detrimental not only from the nutritional standpoint but also because of electrolyte depletion and the possible development of tears of the gastroesophageal mucosa which may bleed (Mallory- Weiss syndrome) and of esophagitis. If vomiting does not respond to the administration of antiemetic drugs, nasogastric suction can be instituted; correction of a gastric hypotonus may prove to be the factor that brings the condition under control.