In an effort to decrease the morbidity associated with radical prostatectomy surgery, minimally invasive, laparoscopic approaches to prostate removal have become popular over the last 10 to 15 years. This is possible because of advances in task-speciﬁc surgical instruments, digital video equipment, and computers and robotic technology. Robotic laparoscopic prostatectomy, introduced in 2002, incorporates “wristed technology” in robotic arms that enable movement with the facility of a human wrist. This advance promises to reduce the longer operative times and learning curve associated with laparoscopic prostatectomy. Long-term cure rates with laparoscopic procedures are now being reported and appear similar to those of retropubic and perineal approaches.

The indications for laparoscopic or robotic prostatectomy are identical to those for open surgery. Contra indications include an uncorrectable bleeding diathesis or the inability to undergo general anesthesia. Prior lower abdominal surgery, morbid obesity, large prostate size, and prior pelvic irradiation or TURP (see Plate 4-17) are relative contraindications. Before the procedure, a mechanical bowel preparation is given and the patient must be aware of the potential for conversion to open surgery. In addition, a highly trained surgical team skilled in laparoscopic techniques is critical. With the patient in the supine or low lithotomy position with steep Trendelenburg, nasogastric and urethral tubes are placed to decompress the stomach and bladder. 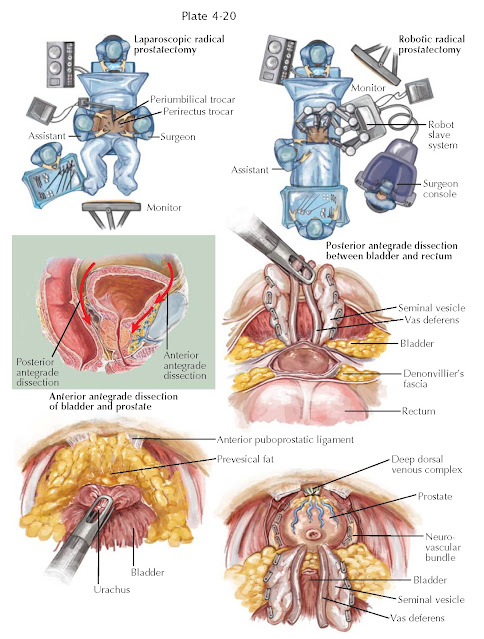 The surgical principles for radical prostatectomy are similar for pure laparoscopic and robotic approaches. The surgical robot uses three working arms and a remote surgeon console instead of a bedside surgeon and assistants with pure laparoscopy. The surgeon in the remote console has control of a three-dimensional camera and all three robot arms and inserts thumbs and index ﬁngers into master controls that allow natural wrist movements to be duplicated by the robot. In the classic transperitoneal approach, a pneumoperitoneum is established using a Veress needle at the base of the umbilicus or an open Hasson trocar, and insufﬂation pressure is maintained at 15 mm Hg. Secondary trocars are placed under direct view, in both pararectus regions, and halfway between the anterior–superior iliac crest and pararectus trocars on each side.

Initially, the relevant pelvic landmarks visualized include the bladder, median umbilical ligament (urachus), the paired medial umbilical ligaments, vasa deferentia, iliac vessels, and rectum. The peritoneum overlying the vas deferens is incised and the vas deferens divided and traced distally toward the seminal vesicles. The seminal vesicles are carefully dissected free using surgical clips in lieu of cautery to avoid injury to nearby neurovascular bundles. With anterior displacement of the seminal vesicles, a small incision is made in Denon-villiers fascia. Using blunt dissection, the plane between the prostate and rectum is developed, a maneuver critical to minimizing the risk of rectal injury later.

Next, the bladder is dissected from the anterior abdominal wall after dividing the urachus, and the space of Retzius developed. The anterior prostate is defatted and the endopelvic fascia and puboprostatic ligaments are divided, exposing the levator ani muscle ﬁbers on the lateral prostate. These ﬁbers are carefully dissected from the prostate surface, exposing the prostatourethral junction. The deep dorsal venous complex is then ligated but not divided. In nerve-sparing procedures, an incision is made in the levator fascia on the anterolateral prostate and a “groove” developed between the neuro- vascular bundle and the prostate. The anterior bladder neck is then divided, the ureteral oriﬁces located, and the prostatic pedicles controlled. The course of the subsequent antegrade or descending dissection of the neurovascular bundle is guided by the previously deﬁned lateral “groove” and proceeds as far distally as possible. Proximal to the previously placed ligature, the dorsal venous complex is divided and the prostatic apical dis- section completed. The anterior urethra is then divided sharply, followed by division of the posterior urethra in the fully mobilized prostate specimen. The specimen is put in an entrapment sac and placed in the right lower quadrant. The vesicourethral anastomosis is then begun posteriorly, where the tension is the highest, and proceeds anteriorly using either an interrupted or running closure. A Foley catheter is placed under vision before the anastomosis is ﬁnished. A closed suction drain may be left in place in the prevesical space. Finally, the entrapment sac and specimen are delivered through an extension of the infraumbilical incision, and the fascia of this incision is closed primarily. The smaller trocar sites do not require fascial closure. Patients are generally discharged on hospital day 1 after laparoscopic prostatectomy. Operative times are typically longer with laparoscopic than open methods, ranging from 3 to 6 hours, but postoperative pain rates are similar with both approaches. Blood loss is generally less with laparoscopic methods as the dorsal venous complex is divided later in the course of surgery, and the pneumoperitoneum has a tamponading effect on venous bleeding.