Mondor disease, or superﬁcial angiitis, is a superﬁcial thrombophlebitis of the breast, named after Henri Mondor (1885-1962), a French surgeon who ﬁrst described the disease in 1939. This is a very uncommon clinical entity that may occur during the late reproductive or early menopausal years. The predominant age for patients with Mondor disease is between 30 and 60 years. This should not be confused with Paget-Schroetter disease, which refers to deep vein thrombosis of an upper extremity vein, including the axillary or subclavian vein often following vigorous activity (though it can also occur spontaneously).

Breast phlebitis is most often linked to a recent pregnancy, trauma, or operative procedure but may occur spontaneously. It most often involves the thoracoepigastric veins of the breast and the lateral thoracic veins. Rarely, Mondor can present following augmentation mammoplasty, manifesting as temporary cords extending from below the breast toward the abdomen. This occurs in less than 2% of patients. In these patients, the cords appear at about 3 to 6 weeks, last a few months, and then usually disappear. 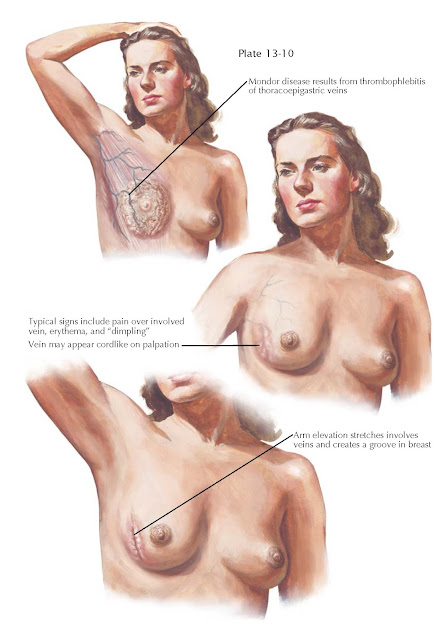 Thrombophlebitis of the breast veins usually presents with symptoms of pain that is acute and generally located in the upper outer quadrant of the breast. Dim- pling of the skin or a distinct cord with erythematous margins may be found on physical examination. In addition, a shallow groove may be seen extending upward toward the axilla when the arm is raised.

Although these symptoms are typical of Mondor disease, they must be differentiated from those of a breast abscess or mastitis, ductal ectasia, carcinoma, or fat necrosis. Mondor disease can be distinguished from inﬂammatory cancer of the breast by the presence of sudden pain, early skin adherence, and progressive improvement, characteristics that are not present in these cancers. Scarring from previous surgery (biopsy, augmentation, or reduction) can result in thickening or a retraction of the overlying skin, similar to that seen in Mondor disease but should be readily distinguished by careful history.

Mondor disease is benign and self-limited. The treatment of superﬁcial thrombophlebitis of the breast is generally supportive: analgesics and heat reduces symptoms. The condition generally clears up on its own in 2 to 3 weeks, but it may take 6 weeks or longer to completely resolve. Although there is generally no restriction on physical activity, good mechanical support with a well-ﬁtting bra or binder improves comfort during vigorous activity. Antibiotics and anticoagulants have little effect on the course of the disease and are not indicated.