In current medical practice, breast imaging is dominated by two modalities, mammography and ultrasonography, for screening and evaluation of suspicious breast lesions. Magnetic resonance imaging (MRI) has demonstrated promise as an adjunct to traditional imaging for selected situations. Other modalities such as thermal imaging (thermography), molecular breast imaging (scintimammography), three-dimensional mammography (tomosynthesis), electrical impedance imaging (T-scan), and transillumination are either experimental or have not proven to be effective.

Mammography is the best mode of screening for early lesions currently available. Mammography can identify small lesions (1 to 2 mm), calciﬁcations, or other changes suspicious for malignancy roughly 2 years before a lesion is clinically palpable. More than one-third of occult breast cancers have calciﬁcations, making the otherwise undetected tumors visible through mammography. 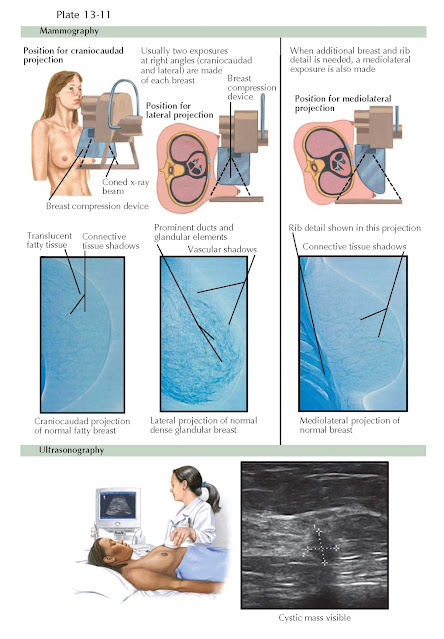 Widespread use of mammography has been credited with reducing the mortality rate from breast cancer by up to 30%. Unfortunately, not all women receive appropriate screening on a regular basis. The most recent breast cancer screening guidelines recommend that mammography be performed every 1 to 2 years for women aged 40 to 49 years and annually thereafter. Most guidelines have dropped the suggestion to obtain routine baseline mammograms in women younger than 40 years. Most have recommended annual screening mammography and clinical breast examination for women aged 50 years and older. However, published and public controversy about the potential beneﬁts and risks of screening mammography continues.

When the patient has a ﬁrst-degree relative with premenopausal breast cancer, screening should begin roughly 5 years before the age at which the relative’s cancer was diagnosed. For patients at increased risk for breast cancer (strong family history or genetic abnormality such as mutations of BRCA-1 or -2), mammography should be augmented by MRI studies. MRI should not be used independently for screening because of its unacceptably high false-positive rate.

Mammography in younger women is more difﬁcult to interpret than in older women because of the greater tissue density present during the reproductive years; breast cancers in these women are more easily missed for this reason. Overall, mammography is approximately 85% accurate in diagnosing malignancy, with a 10% to 15% false-negative rate. For this reason, it provides an adjunct to clinical impressions and the deﬁnitive procedure of biopsy but does not replace them. Roughly, 10% of mammographic studies require additional views. Between 1% and 2% of screening studies necessitate histologic evaluation to establish a diagnosis. Total mammographic radiation exposure is minimal (1 rad).

Ultrasonography has become a valuable tool for use along with mammography because it is widely available, noninvasive, and less expensive than other options. Originally, ultrasonography was primarily used as an effective method of differentiating cystic breast masses from solid breast masses, but it also provides valuable information about the nature and extent of solid masses and other breast lesions. Although ultrasound is less sensitive than MRI (detects fewer tumors), it has the advantage of costing less and being more widely available.

Breast ultrasound is not routinely used for screening, but rather it is useful in the evaluation of palpable masses that are mammographically occult, in the evaluation of clinically suspected breast lesions in women younger than 30 years, and in the follow-up of abnormalities seen on mammography. Some studies have suggested that it may be helpful to use ultrasound routinely with a mammogram when screening younger women or those with dense breast tissue. A large study evaluated the use of breast ultrasonography for screening and found that more breast cancers were found with the combined modalities compared with mammography alone, but the rate of false-positive studies and biopsies also was higher. Ultrasonography is generally acknowledged to be a highly operator dependent modality that requires a skilled practitioner, high- quality examinations, and state-of-the-art equipment.