Primary pathologic states of the organ are rare. Congenital lesions include ureteral ectopy, cysts, and aplasia, many of which can be observed. Infections of the seminal vesicles are uncommon, but tuberculosis and schistosomiasis can cause masses, abscesses, and calciﬁcations. Primary benign tumors include papillary adenoma, cystadenoma, ﬁbroma, and leiomyoma. Malignant neoplasms are extremely rare and include papillary adenocarcinoma and sarcoma. Radical excision of the organ is the standard treatment for malignancy. Far more common than primary malignancy is secondary involvement from adenocarcinoma of the bladder, prostate or rectum, and lymphoma. Few established alternatives to surgery exist for seminal vesicle tumors. A variety of open surgical approaches to the seminal vesicles have been described, including transvesical, transperineal, paravesical, retrovesical, and transcoccygeal methods. In addition, a laparoscopic retrovesical approach is rapidly gaining in popularity. The chosen approach depends on the nature of the lesion to be excised and surgeon experience. 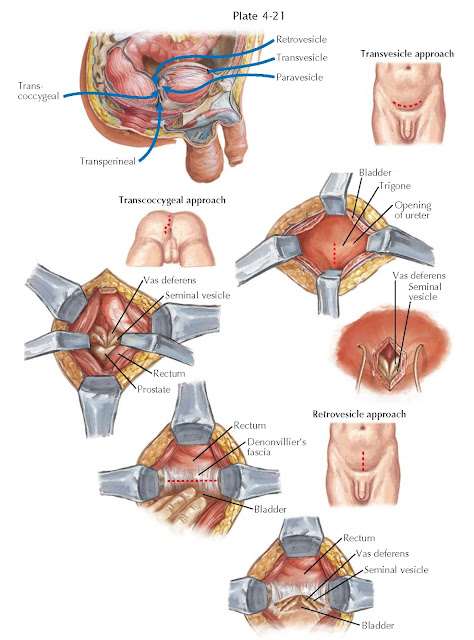 Transvesical approach. With the patient supine, an infraumbilical, extraperitoneal incision is made, the rectus muscles separated, and the space of Retzius entered. A Balfour retractor exposes the anterior bladder wall, which is then opened with a vertical incision. The retractor is repositioned within the bladder to expose the trigone and posterior bladder wall. With a cutting Bovie, a vertical incision is made through the trigone near the bladder neck and the ampullae of the vasa deferentia are visualized posteriorly. The seminal vesicles are identiﬁed lateral to the ampullae, dissected free, ligated, and divided. A metal clip placed across the cut end of the seminal vesicle minimizes organ spillage. The distal vascular pedicle is identiﬁed and controlled with clips or ties, and the organ removed. Too deep a dissection risks violating Denonvilliers fascia and entering the rectum.

Transperineal approach. This approach to seminal vesiculectomy is virtually identical to that described for radical perineal prostatectomy (see Plate 4-18). To adequately expose the seminal vesicle, the rectum should be dissected off the posterior prostate to a point higher than that needed for perineal prostatectomy. The vasal ampullae can be spared for the excision of a simple seminal vesicle cyst or small tumor but may need resection in the setting of cancer or infection.

The retrovesical approach is appropriate for bilateral seminal vesicle excision of small cysts or tumors. A midline, infraumbilical, intraperitoneal incision is made to gain access to the bladder dome and the cul-de-sac between bladder and rectum. The small and large bowel are packed superiorly, and the peritoneal reﬂection near the posterior bladder is incised over the rectum. With sharp dissection, the bladder is peeled forward off the rectum until the ampullae and the seminal vesicle apices are visualized. In a manner similar to the paravesical approach, the seminal vesicles are dissected to the prostatic base and the organ ligated. The retrovesical approach can also be performed laparoscopically (see Plate 4-20). Transcoccygeal approach. Less commonly used, this dissection is appropriate for individuals in whom the perineum or lower abdomen is not accessible because of limitations in patient positioning or due to multiple prior surgeries. With the patient in the prone, jackknife position, an incision is made along the coccyx and angled into a gluteal cleft. The coccyx is removed, and the gluteus maximus muscle retracted laterally to expose the rectosigmoid colon. After Denonvilliers fascia is incised deep to the rectum, it is dissected off the prostate with exposure of the seminal vesicles. Injury to the neurovascular bundle is more likely with this approach because it is directly in the path of dissection. After the seminal vesicles are removed, the rectum is carefully inspected for injury. The wound is closed in anatomic layers, and a drain is placed.