ANOMALIES OF THE SPERMATIC CORD

ANOMALIES OF THE SPERMATIC CORD

Tumors of the paratesticular tissues and spermatic cord are rare and can occur in all age groups. More often, paratesticular tissues are involved by extension from primary germ cell testis tumors. Benign tumors are observed in two of three cases and are usually mesodermal in origin and include adenomatoid tumors, lipomas, ﬁbromas, occasionally myomas from the cremasteric muscle, hemangiomas, neuroﬁbromas, and lymphangiomas. Adenomatoid tumors are the most common benign tumors, accounting for 30% of all paratesticular tumors. They present as solid, asymptomatic masses found on routine examination and are located in the epididymis, testis tunic, or, rarely, the spermatic cord. On sectioning, they appear uniformly white, yellow, or tan and exhibit a ﬁbrous consistency. Histologically, epithelial cells with vacuoles and uniformly sized, round nuclei are observed. Occasionally, adenomatoid tumors are misclassiﬁed as mesotheliomas. Dermoid cysts, the term given to cysts lined by squamous epithelium, are also rare causes of scrotal masses. Mesotheliomas of the testis adnexa usually present as ﬁrm, painless scrotal masses in association with an enlarging hydrocele (see Plate 3-9) in older individuals. Grossly, they are poorly demarcated lesions with ﬁrm, shaggy, and friable areas throughout. Microscopic examination reveals complex papillary structures and dense ﬁbroconnective tissue containing scattered calciﬁcations. 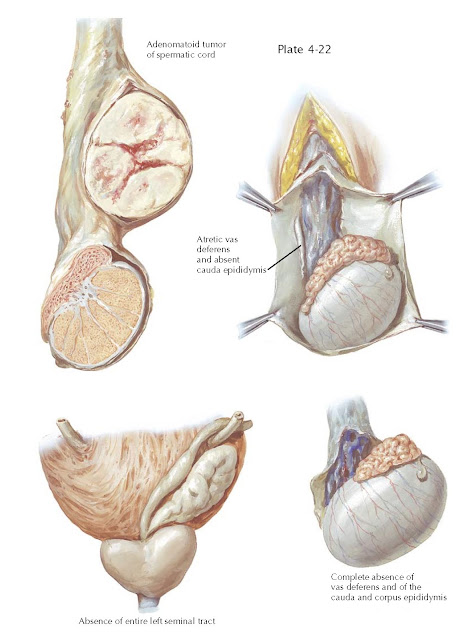 Malignant paratesticular tumors are also rare and include, in decreasing frequency, rhabdomyosarcoma (40%), leiomyosarcoma, ﬁbrosarcoma, liposarcoma, and undifferentiated tumors. Patients generally present with a growing scrotal mass that is solid and non-transilluminating on palpation. These tumors must be differentiated from spermatic cord cysts, hydroceles, spermatoceles, varicoceles (see Plate 3-10), and hernias. Most malignant tumors occur at the distal end of the cord near the scrotum, whereas benign tumors are more often encountered proximally toward the inguinal canal. Primary malignant tumors of the epididymis are exceedingly rare and mandate an evaluation for meta-static adenocarcinoma. The treatment of benign lesions is simple excision, whereas high inguinal orchiectomy, followed by radiotherapy and chemotherapy, is standard treatment for malignant lesions.

Cystic ﬁbrosis (CF) is the most common autosomal recessive disease in Caucasians, with an incidence of 1:2500 births and a carrier frequency of 1:20. The CF gene, called cystic ﬁbrosis transmembrane regulator gene (CFTR; 7q31.2), was cloned in 1989 and encodes the cyclic adenosine monophosphate–regulated chloride channel found in many secretory epithelia. More than 1500 mutations have been identiﬁed in the CFTR gene to date. Clinical features of CF include chronic pulmonary obstruction and infection, exocrine pancreatic insufﬁciency, neonatal meconium ileus, and male infertility. Indeed, more than 95% of affected men have abnormalities in wolfﬁan duct–derived structures manifesting most commonly as congenital bilateral absence of the vas deferens (CBAVD). Anatomically, the body and tail of the epididymis, vas deferens, seminal vesicles, and ejaculatory ducts may be absent or atretic, but the testis efferent ducts and caput epididymis (see Plate 3-3) are always present.

Interestingly, 1% to 2% of otherwise healthy, infertile men also have CBAVD, which is considered a genital form of CF. These patients exhibit the same spectrum of wolfﬁan duct defects as those with CF but lack the severe systemic problems. Spermatogenesis is normal in 90% of men with CBAVD. It is thought that CBAVD is based on similar allelic patterns as that observed in typical CF but it involves less-severe mutations. Isolated CBAVD is considered an “atypical” form of CF and may be associated with subtle lung disease, including chronic cough, sinusitis, and nasal polyps.

In addition to CFTR gene mutations, another genetic abnormality in CBAVD patients is variation in the polythymidine tract of the splicing region of intron 8 (IVS8), a noncoding DNA sequence within the CFTR gene. Three alleles have been detected in this region: 5T, 7T, and 9T, and the efﬁciency of the splice acceptor site function is greatest with the 9T allele. A reduction to 5T decreases the efﬁciency of splicing, leading to a 10% to 50% reduction in CFTR mRNA and a decrease in mature, functional CFTR protein. It also appears that a coexisting 5T variant can turn an otherwise phenotypically mild CFTR mutation into a severe one.

To complicate matters further, patients with congenital unilateral absence of the vas deferens (CUAVD) are another male infertility phenotype that is associated with CFTR mutations. Clinically similar to CBAVD patients, affected men have a palpable vas deferens on one side. Despite this, many CUAVD patients have azoospermia, suggesting the presence of additional, occult wolfﬁan duct abnormalities contralaterally. Wolfﬁan duct anomalies that are unrelated to CF gene mutations can also result in CBAVD. These patients have associated ipsilateral renal hypoplasia or agenesis and generally do not demonstrate CFTR mutations.